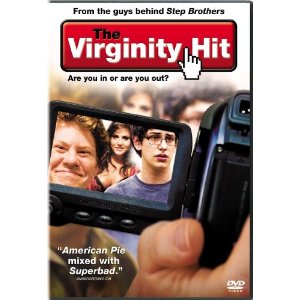 “High school” is a term that brings up strong memories, positive or negative, for almost everyone. It was during these four (or more, I’m not judging) glorious years that life seemed so easy. All we had to worry about was what movie to spend our cash on, whose house had the best basement for hiding liquor, and, most importantly, how do we get on board that elusive “sex train”? For me at least, this was high school. Responsibility was at a minimum, friend counts were staggering, and fun always prevailed. Don’t get me wrong, high school wasn’t always fun and games, but those memories tend to fade the farther removed I am from the experience, and what sticks are the good ones.

What makes my generation unique is the fact that we were the last of the high school students to not have Facebook or YouTube. Entering my senior of high school, neither of these now-blockbuster services even existed. This fact alone should make clear that The Virginity Hit is not intended for adults, or even college students – we have American Pie, after all. Instead, The Virginity Hit is directed at the current high school population, and that demographic – even though they cannot legally see the movie without a parent due to its restricted rating – will find a lot to enjoy about this micro-budget, YouTube-flavored sex comedy.

Four high school friends – Matt (Matt Bennett – Victorious), Zack (Zack Pearlman), Jacob (Jacob Davich – The Adventures of Shark Boy and Lava Girl 3D, The Aviator), and Justin (Justin Kline – The Big Picture) – make a pact to smoke from a water bong every time one of them loses their virginity. The first three lose the V-card relatively quickly, but Matt is straggling behind. He has kept his relationship with Nicole (Nicole Weaver) PG-13 so far, but with their two-year anniversary approaching, the two decide to lose their virginities to each other. A few days before the big night, a rumor starts around the school that says Nicole cheated on Matt with a frat guy. After the four guys “verify” this, they decide to screw Nicole over, figuratively and literally. The boys rent out two hotel rooms, bug one with microphones, and prepare for Matt to lose his virginity and then immediately dump her, all on camera for their YouTube page.

It cannot be said enough: The Virginity Hit is for teenagers, specifically those still in high school. The story is juvenile, as most events in high school are, but is strong enough to keep even my post-graduate mind interested. The boys should be easy to connect with because of their sense of humor, and the humanism they bring to their roles. These are not kids trying to play Jonah Hill and Michael Cera like we see a lot nowadays. Instead they stand out as unique, young, immature, believable high school students. The acting in the film is its strongest point across the board, and even the smaller characters do a nice job keeping things naturalistic. Though the story manages to reach over-the-top status at points, the acting never does, which is The Virginity Hit’s charm.

The cast themselves do most of the filming in the movie, which is motivated in the story by having Zack be a YouTube and film buff who wants everything on video. My biggest concern coming in was that the dreaded shaky cam would conquer all. This is not the case, and The Virginity Hit is a good example of this type of film (where the cast is filming, like Paranormal Activity, Cloverfield, or The Blair Witch Project) done right. Zack is a competent filmmaker, and handles the majority of the shots well. There are even surprisingly few moments where I didn’t buy the justification for the camera being on, which is something that generally plagues films of this nature. The cinematography gave The Virginity Hit a viral video feel, which I’m certain was the filmmakers intention.

The Virginity Hit is this generations American Pie. It may not be as classically hilarious, memorable, or original as American Pie, but it actually has a message that is perfectly suitable to the high school generation: sex should be more than simply “doing it”, and losing your virginity should be something special. Yes, The Virginity Hit has a lot of cursing, drug use, underage drinking, and sex, but so does the average American high school. In this generation, where if a kid can type, he or she can access all types of internet pornography, and where sexual encounters are happening at a younger and younger age, it’s great to see a comedy that deals directly with these issues in a positive, hilarious, and realistic way. The Virginity Hit is the cinematic equivalent of the Condom Caravan: the kids are doing it anyway; why not promote that they do it safely?

The film was shot using handheld cameras, as I mentioned, but the HD cameras used do a great job of telling the story. The lack of a Blu-ray option for The Virginity Hit is not bad because the DVD version is perfectly adequate. The film is presented in anamorphic widescreen, with a 1.85:1 aspect ratio.

Commentary with Filmmakers’ and Cast: Writers and directors Andrew Gurland, and Huck Botko, actors Zack Pearlman, and Matt Bennett, and Zack Pearlman’s father are the commentators for this track. They share a great chemistry with each other throughout the commentary, keeping it entertaining and funny. This is standard commentary track material that fans of the film are sure to enjoy.

Screen Test with Matt and Zack (6:50): This is interesting because it plays out a few scenes from the film, but differently than in the final cut. There are different actors playing the other roles, but the dialogue is mostly the same. This is neat because it shows how far the actors came from the beginning of the process to the final cutting. This is an enjoyable special feature.

Line-O-Rama (3:29): Shows footage of Zack driving a van around New Orleans, trying to deliver the funniest line possible. There are a lot of good lines here, but this gets old about halfway through.

Jersey Girl (2:44): An excellent short about how Nicole Weaver (who plays Nicole in the film) stayed in New Jersey to continue working at TGIFridays while some of the rest of the cast moved to Los Angeles to pursue acting careers. Nicole, a very talented actress, is extremely humble, and this feature is the best of the lot.

Hearing all the negative buzz about The Virginity Hit, and seeing as it was, by most accounts, a financial failure, I never expected to enjoy the film as much as I have. The Virginity Hit will appeal to a niche audience: high school students and teenagers, and that is about all. The story gets exaggerated at times and the humor is juvenile, but the acting performances save it from becoming too unrealistic or stupid. The DVD itself looks excellent for a standard definition release, and the special features are enough to keep fans of the film entertained for a little longer. It doesn’t reach Superbad in terms of humor or staying power, but The Virginity Hit is a modest comedy that works when given a chance.

Branden Chowen is, first and foremost, an actor. He is in his final year of graduate school, where he will (hopefully) soon receive an MFA in acting to compliment his BFA in the art. He spends his free time watching and reviewing movies for Inside Pulse Movies, and We Love Cult. He is also one of the co-hosts for The Drive-In, which is the official podcast of Inside Pulse Movies. He is an avid horror fan, and will spend time watching just about any horror movie that looks interesting. You can contact Branden by email at bchowen[AT]insidepulse[DOT]com, or follow him on Twitter @Psymin1.
More from this author