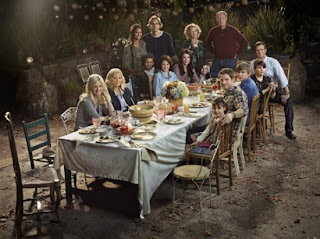 Finally! It had been too long since Parenthood was in my life, and holy crap did I miss it. Honestly, this show is so good it hurts. It brings tears…I mean, there’s this weird thing where my allergies act up and I get really misty-eyed every Tuesday night. Weird coincidence, right?

And yet, to the best of my knowledge this show still hasn’t been renewed. Yeah, TVLine.com says it’s a “safe bet”. But that’s not good enough! What the hell, NBC? What’s taking you so long? I’ve been screwed with enough, what with all the Mad Men deal dramz going on lately. If Parenthood does not get renewed for a third season, I will have a tantrum that will make Max Braverman look like a totally mellow and easy to handle kid.

After an annoyingly long break, lots happened with all our favorite Bravermans, so let’s discuss. 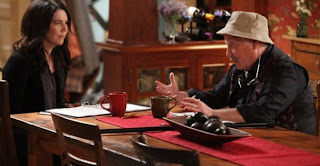 Oh man, just as Sarah’s world brightens a little, Amber’s comes crashing down around her. Ouch. Let’s talk about the good news first.

Richard Dreyfuss is producing Sarah’s play! I love this Sarah Is A Playwright storyline. Love it. We already knew she’s creative and talented. She lives in an artsy college town. I can totally buy that someone would want to make her play. And I loved how Zeek really forced himself in there – first by going against Sarah’s wishes and reading her unfinished play (in the bathroom, no less!) and then by really going against her wishes and showing it to a crazy Broadway superstar friend of his.

It all played out perfectly. It may sound a little far-fetched that Zeek had a war buddy who made it big on Broadway, but as always, Parenthood dialed it back down to real. The guy is an oddball and hadn’t done anything notable in decades. In fact, he hadn’t done anything at all in the last decade. So it’s not like a great big high rollin’ producer is taking a chance on Sarah – she’s taking a chance here too.

From the short scene we saw where Sarah defended her simple character’s simple speech, I think it’s clear that this will be a great storyline to watch play out. The play is obviously very personal, so will it end up hurting anyone in the family? Zeek is obviously fine with it, but I wonder if anyone else, like Camille or Adam or Sarah’s kids will struggle with it. I can’t wait to see what happens.

As great as Sarah’s storyline was (and kudos to Lauren Graham for rocking her scenes – she sounded really horse, so the Twitter consensus was that she must have been sick during filming) the storyline that really packed a punch this week was Amber’s. 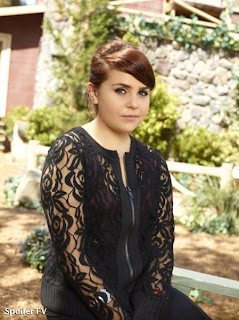 I know I’m not alone in loving Amber, because she’s such a well-written character and Mae Whitman plays her perfectly. Ever since we met Amber, when she was a troubled teen who’d had a screwed up life, you can’t help but root for her. And she turned it around. I don’t know about y’all, but I really thought she was going to succeed.

Should she have applied to more schools? Was it because of her bad grades before she moved to Berkeley? We know she had awesome test scores, so the double-rejection was surprising. When Amber got the devastating news from Carly, I honestly started to analyze the situation like it was real life. Stupid Berkeley! How could they not see how fabulous my beloved Amber is?

For a moment, I was worried Amber was going to completely revert into her old bad girl self. And that would have felt like a cop out, for her to just give up and act like she doesn’t even care. We know she’s come too far to not care. So she got stoned and blasted music in Julia’s boss’s car, but as soon as she realized what she’d done, she felt awful about it. She slipped, but she didn’t revert.

I loved getting the chance to see Julia and Amber interact this week. Parenthood has such a large cast, and it’s always interesting to see a new dynamic emerge. There were a couple beautiful moments here, like when Amber expressed to Julia how impressed she was – everyone always talks about Adam’s career, but Julia has it going on too. And then again, in the car, when Julia told Amber she should talk to Sarah, and that it would be OK. The characters had a great chemistry, and they also had the two most saddening plot points this week.

Amber hasn’t told Sarah yet, because she didn’t want to rain on the play parade. Can you blame her? They have such a great relationship, and we’ve always seen how Amber doesn’t want her mom to sell herself short or give up on her dreams. I don’t know what will be in store for Amber now, but I really hope things turn around. 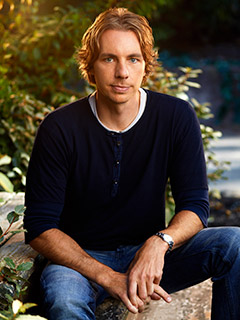 Crosby and Jasmine’s storyline seemed to wrap up a little this week, and I have to say, I like where it went.

Crosby tried to use Jabbar’s class project to stir up happy memories and convince Jasmine to take him back. It was a valiant effort, but I wouldn’t have bought it if it had worked. Perhaps Jasmine, Crosby and Jabbar do have a few great memories, but how many could there really be? They were not together that long.

The thing is, everything about Crosby and Jasmine’s relationship revolves around Jabbar. As sweet as Crosby’s story about how he and Jasmine met was, it was still a hookup. It wasn’t a relationship, and they don’t have the right foundation for a marriage. I’m sure Crosby does love Jasmine, and Jasmine loves Crosby, but that’s not enough to build a marriage on. The thing is, even if Jasmine did forgive Crosby – which she understandably can’t – the problems in their relationship went deeper than his brief infidelity. They’ve yet to acknowledge that, and I would have been annoyed had Jasmine said “OK, I’ll give you a second chance.” Furthermore, I would not have believed that Jasmine could forgive him that quickly. I’m much happier with the outcome that Jasmine thinks she needs to move on.

Because they’re a family no matter what. this means there are still a lot of interesting places this storyline can go. As Jabbar’s school project indicated, Jasmine and Crosby are going to have to interact a lot, no matter what. They need to tell Jabbar the truth, that Crosby is not moving back home. They need to figure out how to co-parent. What happens if Jasmine starts dating someone? How will Crosby react to that? There’s a lot that can be done with these characters while they’re broken up, and even if they stay broken up, and I’m looking forward to seeing where the show goes. 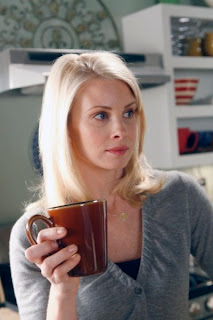 Meanwhile, Adam and Kristina got a rare, uplifting storyline this week. After receiving a mysterious phone call from Max’s school, they were worried he was getting kicked out of another school again. But it was just the opposite – Max is a smart kid, as we’ve all be able to tell, and he’s too smart for the school he’s at. He’s beyond the curriculum and the teachers suggested that Adam and Kristina look into placing him in a mainstream school again.

I think this is a great way to continue to build on Max’s storyline. His social skills have come a long way since we met him in season one, and it makes sense that he would outgrow his school. He’s very bright and curious and academically superior to a lot of kids his age. But there will always be struggles, and I think Max attending a mainstream school could provide a lot of interesting challenges as the series progresses.

Adam and Kristina reacted appropriately – Adam was overjoyed and wanted to move forward immediately, Kristina was scared and wanted to stay in the safe, comfortable school. She didn’t want to see Max get hurt.

At the beginning of the episode, I thought the scene where Kristina discovered Gaby was working for her friend was bizarre and out of place. Kristina and Gaby had already talked, it had seemed like Kristina had come to terms with what happened, and I didn’t think it needed to be played out any further. But it was worth it for the final scene with Gaby, where Kristina discussed moving Max into a mainstream school with her. As much as Kristina was angry over what happened with Crosby, she always trusted Gaby’s judgment when it came to what’s best for Max. I was happy she got to talk it over with Gaby and come to realize that not moving Max to a school that would challenge him intellectually could hold him back. 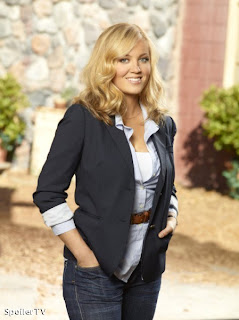 Finally, Julia and Joel got some real material to work with. I’ve always really liked this couple, probably more so than most Parenthood fans. But they have often been relegated to the “Kids Say The Darndest Things!” and “Isn’t Parenting Hard?” storylines. We’ve known that Julia’s been trying to get pregnant for a while, and I always thought the drama was going to come from Joel second-guessing that decision. But this is much better, albeit much more heartbreaking.

Since she was having any luck getting knocked up, Julia decided that she and Joel should both get some tests done. After a very awkward speakerphone debacle with Amber in the room (why does anyone EVER answer on speakerphone?) and a hilarious attempt (if you can even call it an attempt) at phone sex, Joel found out that his swimmers can swim. Also? Sydney repeatedly asking “Swim? Are we getting a fish?” was adorable.

But as is always the case, good news for one spouse means a greater chance of bad news for the other. And Julia found out that she has uterine scarring that will make it very difficult for her to become pregnant. Almost impossible. Honestly, this scene was devastating. Julia wanted to have another baby so badly, and even though there are other options, to have the choice of getting pregnant taken away from you at such a young age would be awful in a way that I cannot possibly comprehend. You’ve really got to hand it to Erika Christensen here, because I thought she acted phenomenally in the scene, with a quiet sadness that just killed me. That said, I’m glad Julia and Joel are going to get a meatier storyline – it was definitely their turn.

All in all, another stellar episode of Parenthood. As I said at the beginning of the review, I’ll be crushed if this show doesn’t return for a third season. I’m confident that it will, but with only three episodes left in the second season I wish they’d go ahead and do it already. Perhaps it’s because The Good Wife steals too many of the viewers, but I wish this show would get more attention. It deserves it.

What did you think of “Taking the Leap”? Which storyline hurt your heart the most?