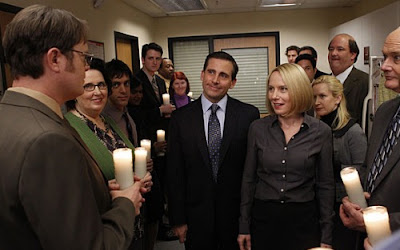 Even though none of this was much of a surprise, I still loved The Office last night.

I’d read an interview with Steve Carell where he said that he didn’t want Michael’s exit from Dunder Mifflin to be a big deal, and I think this really hit the mark. With the return of Holly, we all knew Michael would probably run off and live happily ever after with her. As horrible as Michael Scott can be, he can also be very sweet at times and I wanted him to have his happy ending with Holly.

It all went down so naturally. Michael decided to propose and called Holly’s father to ask permission. Holly spoke to her parents and realized that her father wasn’t doing so well. Her aging parents would just keep passing the phone back to one another, never having an actual conversation. So she knew what she had to do – she had to go back to Colorado to be with them.

The only thing that felt a teensy bit off in the episode was when Holly tried to propose to Michael. In the break room. Obviously, she was going to ask him to move to Colorado with her. But she knows Michael. Wouldn’t she know that he’d want to propose? I loved how Michael just shut it down, though, and walked away.

I loved how involved everyone from the office was in the proposal. Thankfully, Pam put a stop to Michael’s first attempt, which was to write “Will you marry me?” in fire in the parking lot. Like, near cars and stuff. So she gathered Jim, Oscar and Ryan for a brainstorming session. I loved when Michael thought they were going to try and talk him out of proposing, and they all told him how perfect Holly is for him. It was sweet to see everyone encourage Michael and lend a hand, after everything they’ve put up with over the years. 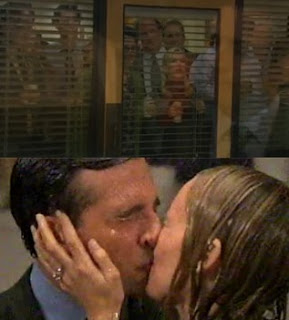 The final proposal was incredibly sweet, and I liked how it was sort of a throwback to Jim and Pam’s proposal. Michael had scoffed that Jim proposed at a gas station in bad weather, but the two things were very similar. It was a place that meant something to them, and it was wet. Michael took Holly on a tour of all the things in the office that meant something in their relationship, and then led her into a room filled with the whole gang, all holding candles. Various people asked Holly to marry them, and Michael’s commentary as Holly replied “no” to each was hilarious. Then he led her into a room filled with candles and got down on one knee…with a massive, massive ring because he thought the guideline was three years salary. Holly said yes, and the sprinklers went off. Hilarious and perfect!

Obviously the proposal was the main event, but the garage sale that was taking place that way delivered a lot of laughs, too. We saw Michael exercise his awful bargaining skills. We saw Kevin “Dallas” Darryl and Andy in a board game. We saw Jim trick Dwight into trading his telescope (which he’d traded up to from a thumbtack) for a package of magic jumping beans – sorry, legumes. The whole thing was just hilarious – I especially loved Andy and Darryl putting on Southern accents and making up rules to the game of Dallas.

So now it is official – Michael Scott is leaving. It wasn’t a shock to viewers, but it was a shock to everyone at Dunder Mifflin when Michael announced it as they all congratulated him and Holly. Even though I’m still a little bummed that Michael Scott is leaving us, I’m looking forward to seeing how everyone will react. And, we have Will Ferrel’s guest spot to look forward to in the next episode!

What did you think of “Garage Sale”? Totally perfect? And as always, check out the quotes and highlights: