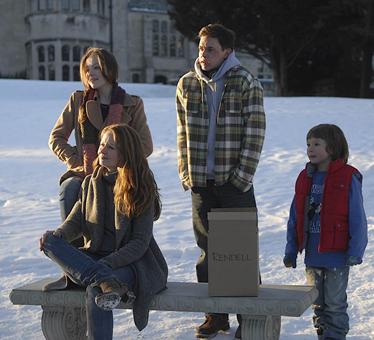 For the unfamiliar, Locke & Key comes from the son of one of the greatest horrormeisters Stephen King. Joe Hill, highly regarded in his own right having published Heart-Shaped Box

, veered into comics territory with Locke & Key. Now it will get the small-screen treatment as a debuting series on Fox this fall.

The comic revolves around Nina Locke (Otto) and her three children, Tyler, Kinsey (Bolger), and Bode who, after the brutal murder of Nina’s husband Rendell Locke, return to Keyhouse, his old family home in Massachusetts. There, they are pestered by an evil entity named DODGE that’s determined to hold the family hostage one way or another until it gets what it wants.

Skitch Commentary: Joe Hill is one of my favorite writers (20th Century Ghosts

is required reading), and Locke & Key has been great (though the trades seem to keep ending abruptly, which can get a little annoying). It should make an excellent TV series, and I am definitely looking forward to it. The show is being produced by Steven Spielberg, along with Alex Kurtzman and Roberto Orci. The tandem of Kurtzman and Orci are coming off the freshman hit Hawaii Five-0 relaunch that I really like.