So, on one hand DC co-publisher Dan Didio finally explicitly confirms that several DC titles were cancelled because of the upcoming Flashpoint tie-ins.

[Dan Didio:] “There’s a lot of changes in the lineup, and a lot of books were cancelled because we had minis coming into tie into ‘Flashpoint,’ and we didn’t want to overextend the line,” Didio said. 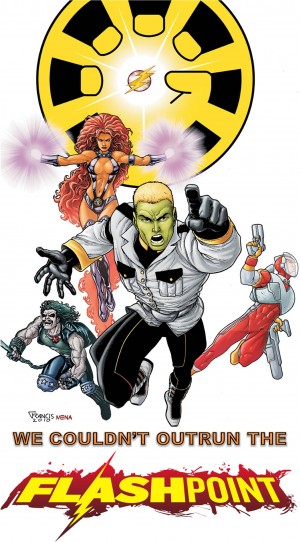 He noted that they were committed to continuing with the ongoings still on the schedule as long as the fans supported them at the comic shop.

The books that were cancelled were: R.E.B.E.L.S., Batman and the Outsiders, Freedom Fighters, Doom Patrol, and JSA: All Stars. With the exception of Outsiders, I read the other four. Also, DC is cancelling Flash with issue #12, but even a casual fan knows a Flash title will be back after the Flash-centric Flashpoint event and probably with a Flash: Speed Force companion book with other speedsters (despite DC’s shoddy treatment of Wally West thus far).

On the other hand, DC Chief Creative Officer and go-to writer Geoff Johns indicates that all the tie-ins came about due to the creativity of the collabrators. However, the main Flashpoint book he writes is accessible while the tie-ins flesh out how some characters got to where they got.

[Geoff] Johns: A lot of it was ideas they had about exploring the world beyond what I could tell in the pages of Flashpoint. My mini-series really centers on a core group of characters in this world, and a lot of the other ones come in and out. And then there were so many glimpses of other characters that could be explored, and there was an opportunity to look at what changed them and why. And I think that was what was enticing to so many people.

The tie-ins aren’t just, like, “look, so-and-so is this way.” It’s exploring “how did they get there, and why?” That’s the idea that drove a lot of the people who are involved. What would happen to make a hero in our universe go this far?

So, the tie-ins aren’t integral to the main Flashpoint narrative. That’s the double-edged sword of an accessible main event book in tough economic times.

After Over 22 Consecutive Years In Various Creative & Executive Roles With Marvel, Joe Quesada Makes His Exit!