Welcome back, Amazing Race fans! After a week without a new episode, I’d almost forgotten where we’d left off in TAR. The teams picked things back up in India and stayed there throughout the leg. That worked for me, since India always provides a lot of challenges for teams. And I wanted a good episode this week, since Sunday was my birthday. And really, what better way to cap off a weekend of festivities than with some great TV?

Flight Time Is Not So Easy

All the teams had to travel to Varanasi, India for this leg of the race. Most of the teams booked a flight that would land at 10:30 a.m., but the cowboys made a blunder and ended up on an 11:30 a.m. flight instead. I know some people are huge cowboys fans, but I’ve always found them to be an overrated team. They tend to make mistakes, and this was one of them. Jet said when someone looks him straight in the eye and tells him something, he believes it. Apparently whether it’s “This is the earliest flight” or “I just can’t quit you”, this cowboy will take your words as the truth. Big mistake, buddy. There are a lot of stupid people in the world. And some liars too. There are a lot of reasons to question what people tell you.

The way teams spent their downtime at the airport was telling. Two parent/child teams remain, and they couldn’t have different approaches. Gary and Mallory want to be the first parent/child team to ever win, and they took the opportunity to do a little research about the city they were traveling to. Mallory continued to be delightfully adorable as she marveled over how excited she was to visit a holy city. Where did this girl come from? Why is she so positively angelic? Ron and Christina went to – what else? – EAT. Because Ron is always hungry. They chowed down and talked about how great it is to spend time together before Christina gets married.

The cowboys didn’t figure out that all the other teams had booked an earlier flight until it was too late, so they started the leg off with a pretty substantial disadvantage. 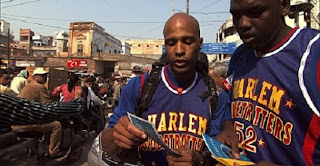 Once in Varanasi, teams faced various problems. The noise and crowds are getting to Zev, who has very sensitive ears. (Further proving her status as an angel, Mallory lent him some earplugs.) Kent whined that a cab driver hit him in the head with the car trunk door. Big Easy noted that “When you push the gas, the horn blows in India. In the states if you drive like this, you’ll have a helicopter and three or four police behind you,” but also convinced his driver to speed past almost all the other teams by cheering like they were at the Olympics. “Represent yourself! Represent your country!” The driver didn’t seem to acknowledge the cheering with any sort of emotion, but he did get the ‘Trotters to the Roadblock pretty darn fast.

For the Roadblock, one team member had to look through the crowd for some colorfully dressed, tiny, spiritual men, using only photographs to identify them. Each man would give them a piece of paper with some words on them, and once they had all the words they’d have to assemble a sentence for one last colorfully dressed, tiny, spiritual man. Justin put it best when he said “The holy men, they looked like an anorexic Santa Claus.”

A lot of the teams made quick work of the task. Jen finished first, after briefly working with Big Easy but mostly handling things on her own. Big Easy ended up teaming up with Justin, and they finished quickly. Kent basically forced himself on Gary and promised that if they could work together, Kent would show Gary where the final spot was, which he’d already found. “I won’t screw you!” he promised. Of course, as soon as he’d followed Gary from place to place picking up clues, he bolted and left Gary on his own, not following through on his promise. It was a pretty crappy move, not unlike what happened to the Globetrotters in their original season. I hate when people do this, because it’s so cheap and dirty. Just work by yourself and you won’t have to screw someone in the end. Don’t make those promises, and then you won’t have to break them. I appreciate a team who gets themselves to the end by looking out for themselves. People who finagle their way into front row seats on the airplane, or score a better flight and keep that info from the other teams. But people who go out of their way to lie? Lame. Go on Survivor if that’s your deal.

Gary finished pretty quickly on his own, which left only Cord and Ron at the task. Ron had a huge head start, but it had been a major mistake for him to do that task. He’s too easily distracted, too scatterbrained, too easily confused. He’s good for detailed tasks like the tea, but not for wandering around a busy street looking for clues. Cord ended up finishing the task before Ron despite the later flight, which wasn’t good for Ron and Christina.

For the Detour, teams had to choose between “Feed the Fire” and “Feed the Buffalo”. It was a hard choice. For all-male teams, “Feed the Buffalo” was a good choice because it involved delivering a bale of hay to an address. There’s always the chance you can get lost, but if you’re strong you can get it done quickly. Bales of hay can be deceptively heavy, though, so for some teams it wouldn’t have been a wise choice. The other task wasn’t as physically strenuous and it was only in one location, but it involved manure. And I can imagine in a hot Indian city, that did not smell good at all.

Justin and Zev and the Globetrotters both went for the hay, and they did well. Except for a brief moment when cows tried to eat their deliveries, there didn’t seem to be any glitches. When it came time to catch a cab the ‘Trotters overtook Justin and Zev, and they managed to pull out a first place finish. From worst to first! They had a couple of rough legs, but I still think Flight Time and Big Easy are one of about four teams (along with Justin and Zev, Gary and Mallory and Kisha and Jen) who I can see winning this race. Justin and Zev then came in second. 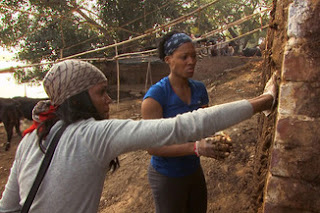 Kisha and Jen were the first team to go for the manure, and they struggled with it. They gagged a lot, and the gross situation made them bicker a little. The thing about these sisters, though, is that even when they bicker they’re kind of funny. You never feel like they hate each other, they just both tell it like it is. They squished up that poo like a couple of champs and made it to the pit stop in third place.

Poor Mallory, she’s been on The Amazing Race twice and both times she’s had to deal with manure. And while wearing the same outfit, too! She and Gary raced through the challenge, though, and finished around the same time as Kent and Vyxsin. I have to say, I’m growing tired of the goths. Kent’s crybaby ways are really grating my nerves. I mean, come on – carry your own backpack!

Kent and Vyxsin had some transportation issues after leaving the Detour, which resulted in Vyxsin jumping into the river. Not a wise choice. I sure hope she got all her shots before she left! I loved Kent scolding her like she was a child. “Don’t go in the water, are you insane?” and “Get out of that water!” and “You gotta get a grip, sis.” It was pretty gross.

Vyxsin’s impromptu swim gave Gary and Mallory the chance to take the lead, so they arrived at the pit stop in fourth place. I was glad they managed to come out ahead of the goths after Kent totally screwed Gary at the Roadblock. 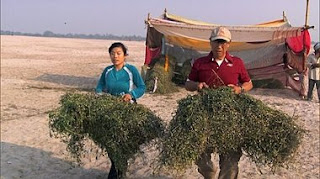 Meanwhile, both the cowboys and Ron and Christina decided to go for the hay challenge. This was the second mistake Ron and Christina made. (The first was the decision to have Ron do the Roadblock rather than Christina.) They’re pretty methodical, and I think they could have finished the manure challenge more easily. Either way, though, I think they were too far behind to have a prayer. Jet and Cord finished the hay challenge in a jiffy and even beat the goths to the pit stop, coming in fifth. At this point, I didn’t really care which team went home. My four favorite teams all landed in the top four, so after that it’s all gravy. The fact was, Ron took forever on the Roadblock and they just didn’t have the opportunity to catch up. Kent and Vyxsin came in sixth place and the hungry father and his loving daughter were sent home.

What did you think of the episode? Will you miss Ron and his constant cravings for food? Do you think his relationship with Christina improved this time, or will he go back to being overly critical and difficult in 3…2…1…now? Who do you think the frontrunners in the race are now?