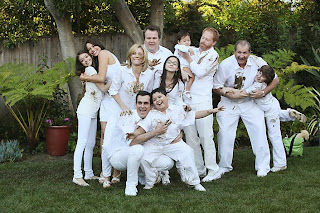 Modern Family is at its best when all three families are interacting in some way, and I think last night’s “Someone to Watch Over Lily” was one of those classic episodes. Every character was utilized in the best way possible, yet the episode didn’t feel overcrowded or forced.

The premise of the episode was that Mitch and Cam were trying to decide who should become Lily’s legal guardian should (god forbid) something ever happen to Mitch and Cam (god forbid). Since Cam’s family lives in Missouri and have frozen cows and crazy, gun-loving aunts to contend with, the race was between Jay and Gloria and Claire and Phil.

Jay and Gloria were the obvious choice, since Gloria fawns over Lily so much. The way she reacted when Mitch asked her if she’d consider being the guardian was so, so hilarious. “I can’t wait!” It takes a certain comedic finesse to be able to hope for a tragedy yet come off as sweet rather than malicious. 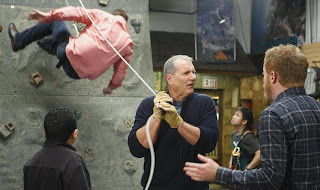 The problem was, Cam wasn’t sold on Jay as a father figure. He and Mitch left Lily with Gloria while they accompanied Jay and Manny to the sporting goods store, where Jay bullied Manny into trying to climb a rock wall. Then, to make matters worse, when Cam tried to show Manny how to climb the wall, Jay dropped him. Oh, and Gloria got Lily’s ears pierced, which I thought Mitch and Cam way overreacted to.

With all that, though, they still came up spelling like roses compared to Phil and Claire. With three kids their household is just too crazy to take in Lily! The scene where Mitch and Cam dropped in and a frying pan was on fire, Haley was screaming, Alex had been locked in the garage looking for rat traps and Luke was about to try and learn to juggle knives was hilarious. 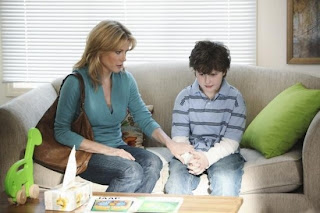 More was going on in the Dunphy household than several reasons to call Children’s Aid, though. Claire made a super-secret appointment for Luke with a child psychiatrist, and Phil found out. Claire was worried about Luke’s lack of focus and, as it awkwardly was revealed, the possibility that he could grow up to be just like Phil. Did they both miss the part where the psychiatrist said Luke was above-average, though?

Since Phil and Claire had traveled in separate cars and were fighting, they failed to realize that they’d left Luke in the parking lot. All day. Strike two against the Dunphys as guardians! Oh, and their daughters? Yeah, arrested. I loved the Haley/Alex storyline. After Alex bailed on her cello lesson, she had to tag along with Haley and her friend…to vandalize the locker of a girl who’d done Haley wrong. Not only were there a lot of laughs, but there was a really sweet moment between the sisters when Haley got Alex to admit that she hates playing the cello. Unfortunately they got busted for the shaving cream thing, and going to pick up both your daughters from jail was one more reason to not let Phil and Claire raise Lily.

Manny was the one to convince Cam that Jay could be a great dad, though. He explained to Cam how after the climbing incident, Jay had gotten to the bottom of why Manny really didn’t want to go on his school trip. Jay handled the situation with such care and love, it was touching without being overly mushy – which is a balance this show tends to strike very well. Cam announced that Gloria and Jay would be Lily’s guardians (god forbid!) and Claire was too busy locating her own children to take umbrage.

I really loved this episode – I think it’s one of the best ones this season – and it had lots of funny lines and moments. Here’s some highlights: