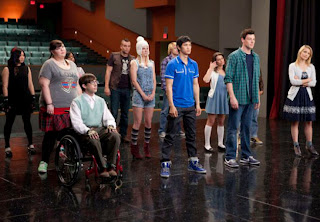 They were born this way-hey! Glee rocked Lady Gaga’s anthem during their 90 minute episode on Tuesday night, appropriately titled “Born This Way” and I was all kinds of in love with it. Seriously. If I wasn’t writing a review, I’d be watching it again right now.

There was so, so much to love. Awesome Santana moments. Lots of Will and Emma action. Amazing clothes that I will review in detail on You Know You Love Fashion this week. Kurt’s triumphant, top-hatted return to McKinley High. Lots of Barbra Streisand. And “Born This Way”. I soaked up every minute of the wacky, adorable, fun, inspiring, delightful episode in, yes, pure glee.

A word about “Born This Way”, as a song. Yes, it is reminiscent of “Express Yourself”? And I could not care less, mmmk? It’s more than twenty years later, it’s the kind of anthem for people ostracized by society that Madonna’s tune was for women back in the day, and it’s incredibly upbeat and catchy. So don’t bother coming ’round here with your hate, because I’ve got nothing but love for it. 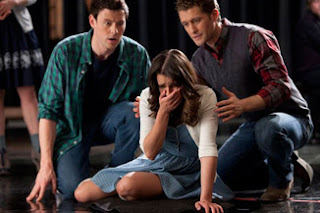 We started things off with a dance lesson, and Finn accidentally knocking Rachel to the ground. While we’ve all probably wished Rachel would end up with a bloody nose at some point, she’s been pretty likable lately so I felt bad for her. Maybe it’s because I’ve always had a bit of a phobia about breaking my nose.

The doctor confirmed that her schnoz was broken and suggested she take the opportunity to make some cosmetic readjustments. It could help her voice! It could help her be pretty, like Finn’s girlfriend! She’s 16, so it’s OK! So Rachel contemplated the decision, much to the disappointment of her fellow glee clubbers.

Well, not to everyone’s disappointment. Santana seemed to be all for it, which shouldn’t be a surprise since we know she’s had her, uh, assets enhanced already. Santana also took the opportunity to point out what features everyone else should get fixed, which was equal parts mean and funny. At this point it seems Santana has pretty much taken over from Sue Sylvester, and I think I’m OK with that.

Will was struck with inspiration when he went to talk to Emma about the kids’ problems, but realized that he could use the Gospel of Gaga to help the glee kids and Emma, who seemed to now be spending about 90% of her day sanitizing fruit. So let’s talk about Emma.

I loved that Emma put “Ginger” on her ANTM-style shirt, which was meant to declare an attribute that you are insecure about, rather than “OCD” as Will had intended. First of all, I totally get that she wouldn’t want to reveal personal information in front of a bunch of teenagers, even if her OCD is just as obvious as her hair color. Second of all, I am fascinated by the weird hatred for “gingers” that some people have. There’s a thing called “Kick a Ginger Day”! That’s horrible! And once, I was artificially redheaded on that day and lived in fear for 24 hours!

But here’s what I really love: That Emma was not magically cured by Will Schuester. He tried by attempting to make her eat unwashed fruit – if people who insist on washing dirt and pesticide covered fruit are OCD, then hand me a bottle of pills – and had that actually cured her, I would be all kinds of annoyed. Instead Emma sought counseling for her OCD (which, I believe, she’d done before) and it was suggested that she could benefit from some anti-anxiety medication. Because even though we live in a society that tends to over-medicate, there are also legitimate reasons to take pharmaceutical drugs to help with mental illnesses. They are real, and there’s nothing to be ashamed of. I’m looking at you, Tom Loony Tunes Cruise. So I thought Glee handled the Emma situation really well, and kudos to them. Plus, I’m pleased to get lots of Emma screen time and the promise that she’s on the path to being healthy enough to sustain a romantic relationship with Will. Zoloft might be part of the cure for Emma’s OCD, but Emma Pillsbury is definitely the cure for Will Schuester’s occasional bouts of creepiness and douchiness.

The Return of Kurt

You had to know Kurt would make it back to McKinley at some point this season – it was only a matter of when and how. There was no way – no way, I say! – that New Directions was going to NYC without him. And I’d bet my new Anthropologie shoes  a pair of shoes that I am mildly affectionate of a whole dollar that Blaine will be transferring soon too. Blaine is such a popular character that I think Ryan Murphy and co. will want to keep him around as more than just Kurt’s boyfriend, so it’s a pretty safe bet. I’m just not much of a gambler.

So how did Kurt manage to return to McKinley, home to  Über-bully Karofsky? Well, you can thank Santana for that. The plan was, I will admit, a little questionable. Santana is still very much in the closet, and bummed that Brittany won’t dump Artie in her favor. And she wants to be prom queen, which has something to do with wanting to stay in the closet. And, I think, she also kind of wanted Kurt back. He’s awesome, she must know that. So her plan came together when she noticed Karofsky checking out Sam’s butt – what with the confrontation Karofsky had with Kurt and Blaine last week, it wasn’t hard for her to figure out. So she blackmailed Karofsky into taking part in her plan.

Santana coached Karofsky to declare himself a changed man. He wouldn’t bully anyone, especially Kurt anymore, and he’d don a red beret with Santana to form an anti-bullying Guardian Angels type group. Oh, and they’d also fallen in love. Kurt would feel safe to come back, and everyone would be so appreciative of the couple that they’d be voted prom king and queen.

So after a conference and a private talk with Kurt and Karofsky, Kurt decided to return to McKinley. I have to say, I was impressed with how the whole thing was handled. Kurt’s dad was appropriately wary and angry, and Kurt was appropriately suspicious. He made Karofsky agree to educate himself and help start of a chapter of PFLAG, which stands for Parents, Famliies, and Friends of Lesbians and Gays, which I assume is a real thing. I liked how the conversation between Kurt and Karofsky went down. I didn’t want Kurt to pressure Karofsky to come out of the closet, because in a way that’s it’s own kind of bullying. He’s not sure he’s gay, it’s a tough thing to figure out, and no one should have to do that before they’re ready.

Kurt celebrated his return to McKinley with a fantastic (though lengthy, thank god for those extra 30 minutes!) Barbra Streisand number, “As If We Never Said Goodbye”, which I just loved. It was beautiful, and it also reminded us all what a fan-freakin’-tastic singer Chris Colfer is. The Warblers mourned Kurt’s departure and said goodbye by serenading him on the McKinley campus with “Somewhere Only We Know”. I’d listened to this song well in advance of the episode and love it. I love it so much that I joyfully ignored the fact that a poor Ohio school had a piano just sitting outside in the quad. Because you know what? That’s Glee. 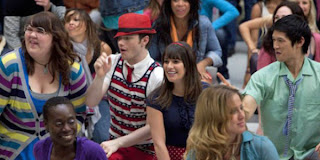 Back to noses and the race for prom queen. Quinn really shone this week, as she battled Lauren for the role of prom queen and acted as a model for Rachel’s new nose. I loved Rachel and Quinn’s duet of “Unpretty/I Feel Pretty”, and I thought the accompanying scenes were really well done. And in the end, Rachel decided not to have her nose shaved down to look like Quinn’s. This was obvious, since we all knew Lea Michele wasn’t about to go get a nose job for the sake of Glee, but the storyline was still really nicely executed.

You know who did have her nose shaved down? Quinn. Yes, Lauren did some digging on her competition and found out that during middle school Quinn Fabray had gone by her first name, Lucy and had been chubby with acne, glasses and a big nose. So what did she do? Oh, just put posters of Quinn all over the school. I’ve never been a big Lauren fan (I blame her clothes) but she really lost me on this one. No one deserves that. It was cruel, even if it did result in every pudgy, pimply-faced girl in school starting to idolize Quinn even more.

I kind of wish they’d just let Quinn be pretty. Because guess what? Some people are born that way – Dianna Agron was. I think that could have been just as interesting of a storyline – that Quinn has struggled in life (she had a teenage pregnancy last year, for goodness sakes!) despite her beauty. That looks aren’t everything. Anyway, that is a minor complaint – the plot was fine, I just sort of wish it had gone in a different direction. Also, I’m still mad at Lauren, but at least she apologized.

Baby, I Was Born This Way

I think my favorite moment was when Brittany gave Santana a T-shirt that said “Lebanese” rather than “Lesbian”. (Also, loved the connection to the Gaga song, because the lyrics go “You’re black, white beige, chola descent, you’re Lebanese, you’re Orient”. This is probably because I am of Lebanese heritage and like to consider it a personal shout-out.) Brittany told Santana that she didn’t love herself nearly as much as Brittany loves her, so it was nice to see that Santana at least did wear the “Lebanese” shirt rather than the “Bitch” one she’d gotten made, even if she didn’t participate in the musical number. It was a shame, since I think Naya Rivera’s voice is best suited to the song, but it would’ve been too big a leap for her character.

What did you think of the episode? As you know, I loved it. I thought it hit all the right points, made great use of the extra time, and I’ll be downloading all the songs on iTunes. Now, check out these highlights, featuring a number of great barbs courtesy of Santana: