Uber-scribe and DC Chief Creative Officer Geoff Johns’ Flash opus mega event is upon the comicdom. FLASHPOINT is here, but do we understand how we got here and what may be needed to get us back to “normal”… if that is even feasible? 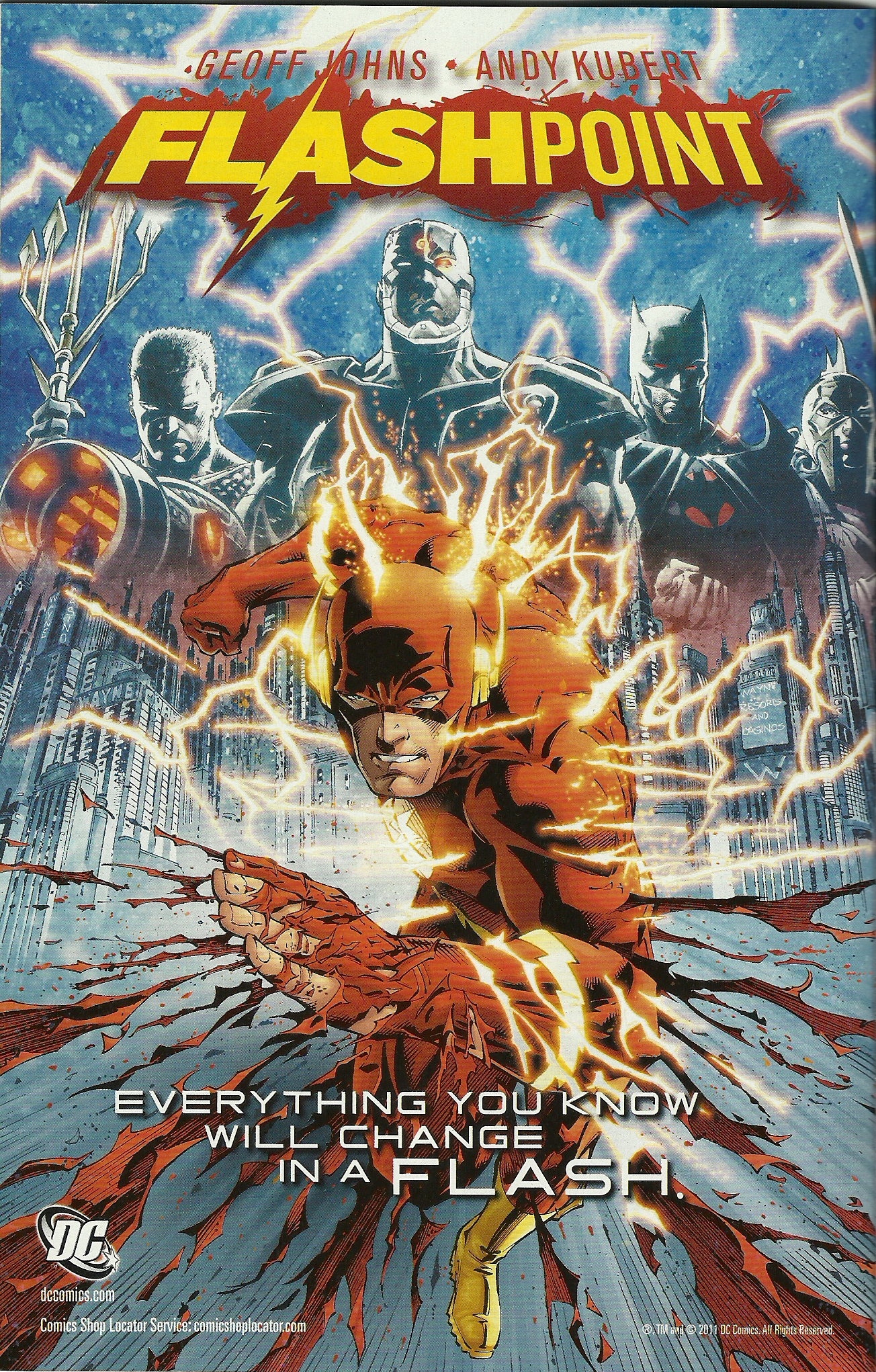 While I don’t have a PHD in physics, I was able to pull together some additional puzzle pieces laid out by Geoff Johns in Flash #12 and Flashpoint #1 plus those unveiled by comics legend Dan Jurgens in Booster Gold #44.

These clues build on the puzzle pieces that these two creators have already unveiled that we covered in our first two puzzle updates, namely introducing the current physics cocktail behind the existence of Flashpoint Earth. Namely that an enigmatic temporal disruption of the early 21rst Century caused time fissures leading to the formation of time paradoxes through which “New Time” was caused. Yes, paradoxes is pluralized which could refer to actual people or events in the DCU or perhaps both.

In addition, Geoff Johns added “anomaly” to the Flashpoint lexicon in Flash #11 and hinting originally that it could be Bart Allen / Kid Flash.

(Although outside of the Flash title, some readers have speculated on Wonder Woman being the anomaly due to her timeline challenges in her current title.) 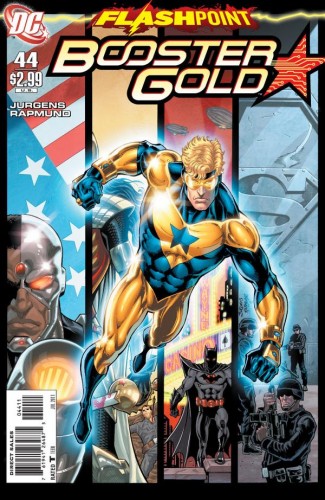 We speculated that this new “anomaly” reference, coupled with Kid Flash’s absence from a Flashpoint #1 “Flash Family” pic, indicated that Kid Flash was a key part of the Flashpoint equation. That and Bart’s previous aging and de-aging in his own short-lived titled of Flash: The Fastest Man Alive would prove important.

We also learned through the reveal of the “World of Flashpoint” global map that a “Time Anomaly” is actually localized near Central City, the home of Barry Allen, the Flash. That would seeingly indicate that someone is the anomaly not an event. It may also indicate that the Reverse Flash / Zoom is NOT the anomaly since he can travel at the speed of thought around the globe and isn’t a stationary or localized character. 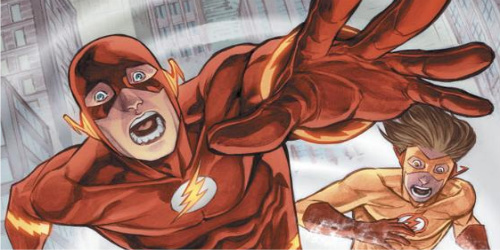 He hasn’t been seen prominently IN a comic book in heroic form in a while (although he has adorned the covers of recent Flash issues and was present in civvies for an “intervention” for Barry recently). We have talked about Wally’s whereabouts in the past.

So, with all that said, before we reveal recent Flashpoint puzzle pieces from DC, lets go to dictionary.com to define some of the key terms leading up to Flashpoint that at their surface may seem too similar and potentially confusing.

Flashpoint definition: “a critical point or stage at which something or someone suddenly causes or creates some significant action”.

Anomaly definition: “a deviation from the common rule, type, arrangement, or form… AND…someone or something anomalous.”

Fissure definition: “a narrow opening produced by cleavage or separation of parts.”

In the definition of “fissure”, the word “narrow” is the key part I think. Another potential indication of a person or people being the cause of all these problems in the DCU?

The first three pages below have Hot Pursuit, an alternate Earth’s Barry Allen, revealing that the problem here, that causes the Flashpoint event, is an “anomaly… a floating paradox riding the timeline…” that negatively impacts the “historical equation”. At first, he thinks its Kid Flash which makes sense since he is time-displaced and teased as being “lost” during Flashpoint.

We see on the second page that whomever the anomaly is, they will cause “temporal tragedies… all because the past, present and future collide.”. This appears to be because whomever the anomaly is, he/she “does not belong here”. So, is the anomaly someone that is dead that has come back to life? Someone from the future living in modern day? Someone from an alternate Earth? Whatever or whomever it is, the statement would infer that if the anomaly is removed during Flashpoint the DCU can go back, somewhat, to how it was before. However, it won’t be exactly the same timeline as before for reasons I’ll explain shortly. 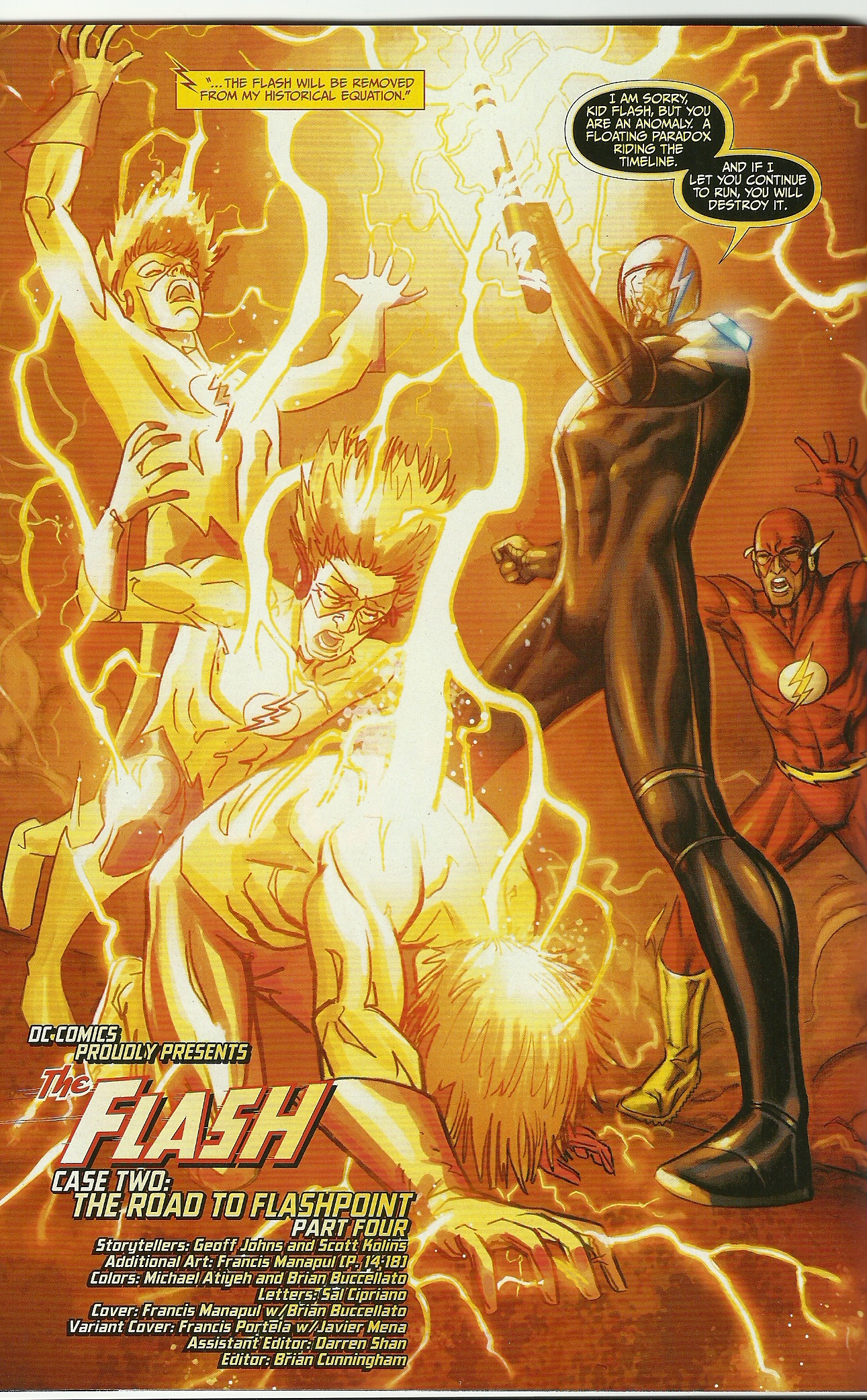 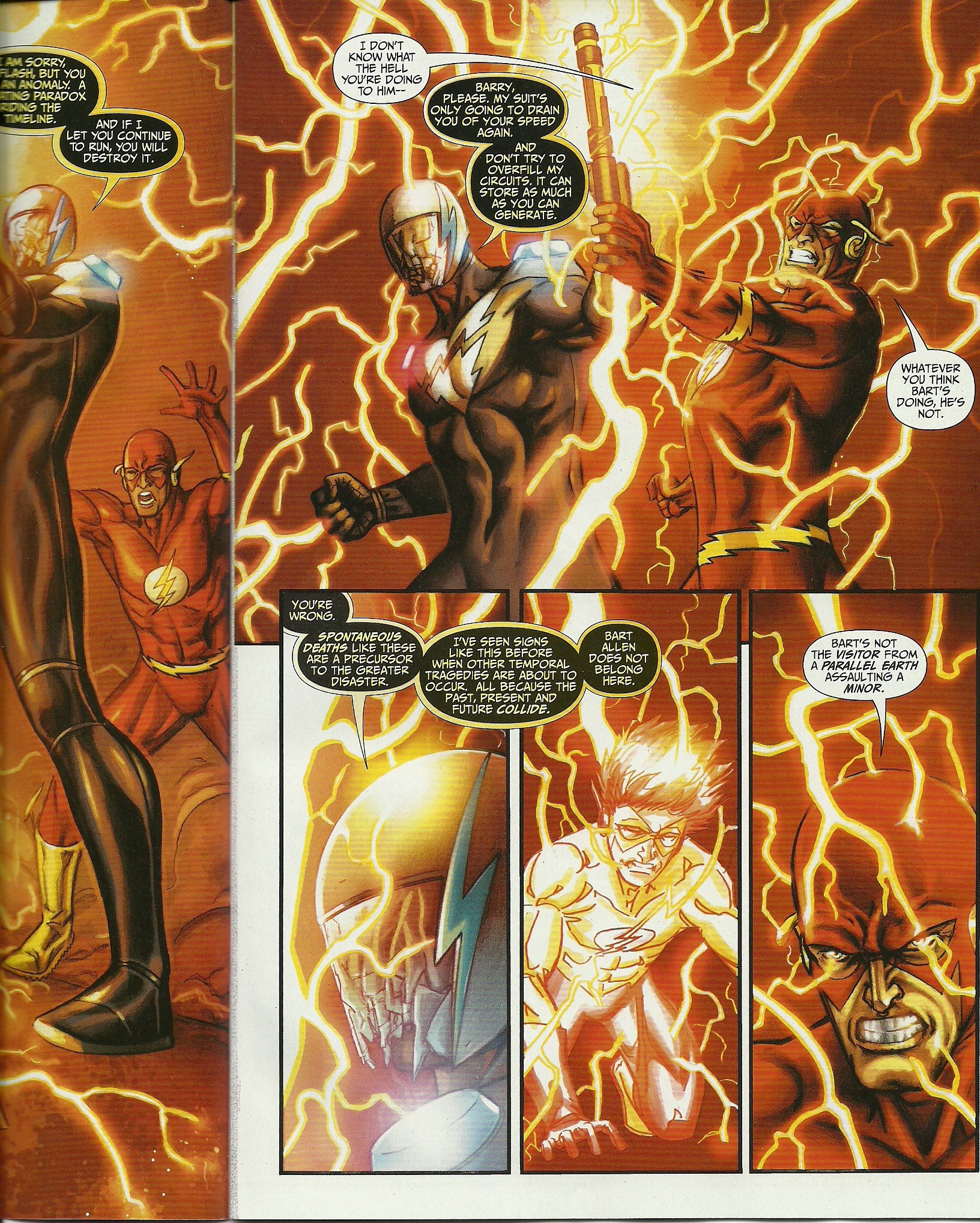 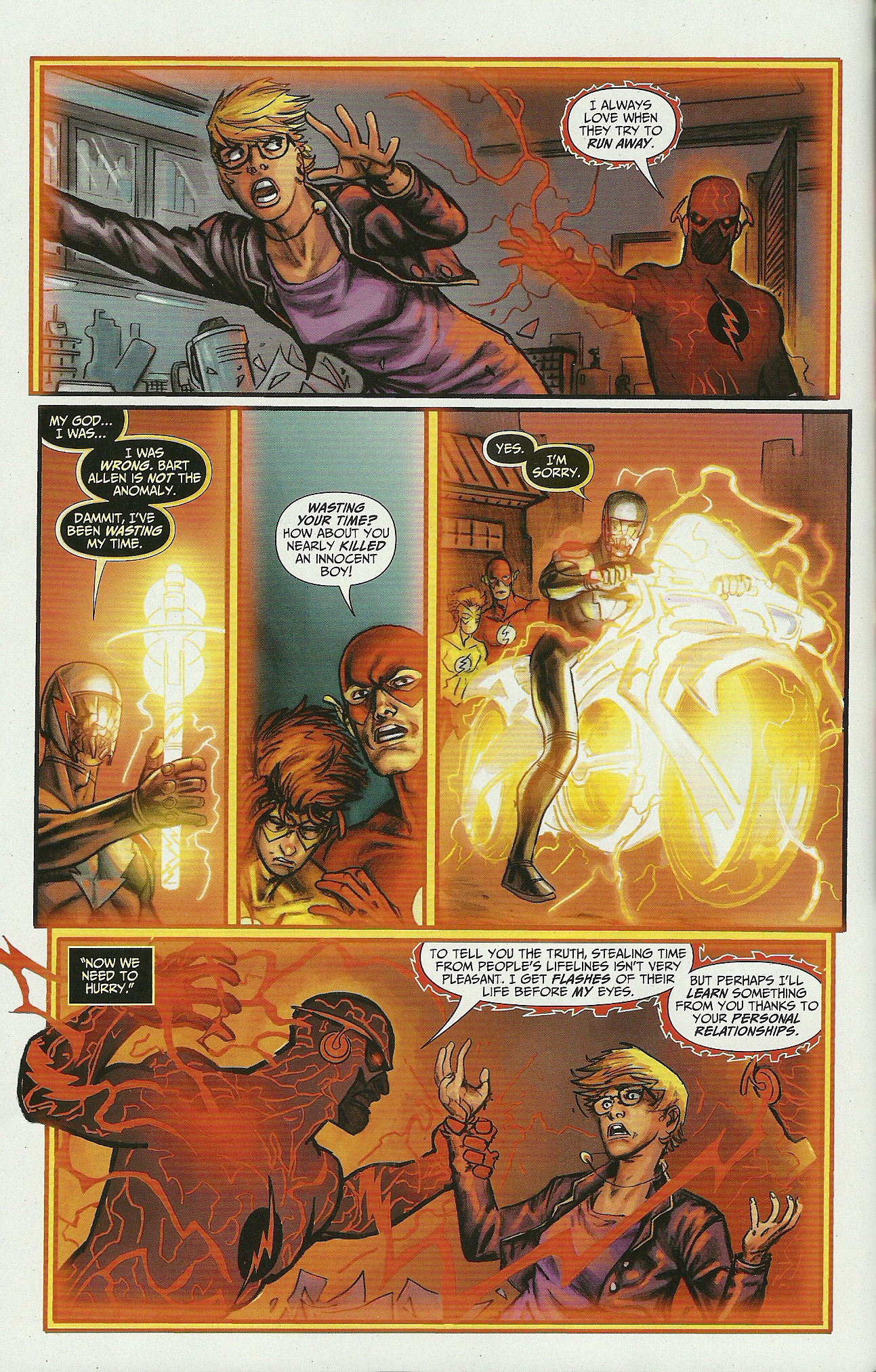 On the next three pages the plot thickens.

Bart Allen’s aging and de-aging is actually the catalyst for Zoom expanding his mind and realizing that time and speed force are essentially the same thing. Bart Allen, in his previous short-lived role as Flash in his own series, seemingly “pioneered the aging process and the paradox existence protocol…. unknowingly”. Ok, that is starting to make sense and tie in some of the confusing elements of Bart’s time as an older Flash.

The last two pages focus on Barry’s mom on one hand and Zoom (presumably the Reverse Flash and not Barry in the Zoom costume a la the first Flashpoint teaser in Flash #1) conjuring a bolt of lightning that seemingly causes the Flashpoint on the other hand. The storm is brewing in Central City, as can be seen at the cemetary where Barry is visting with his mom’s grave. Does the lightning strike Barry’s mom’s grave? Is SHE the anomaly? Hmmm. 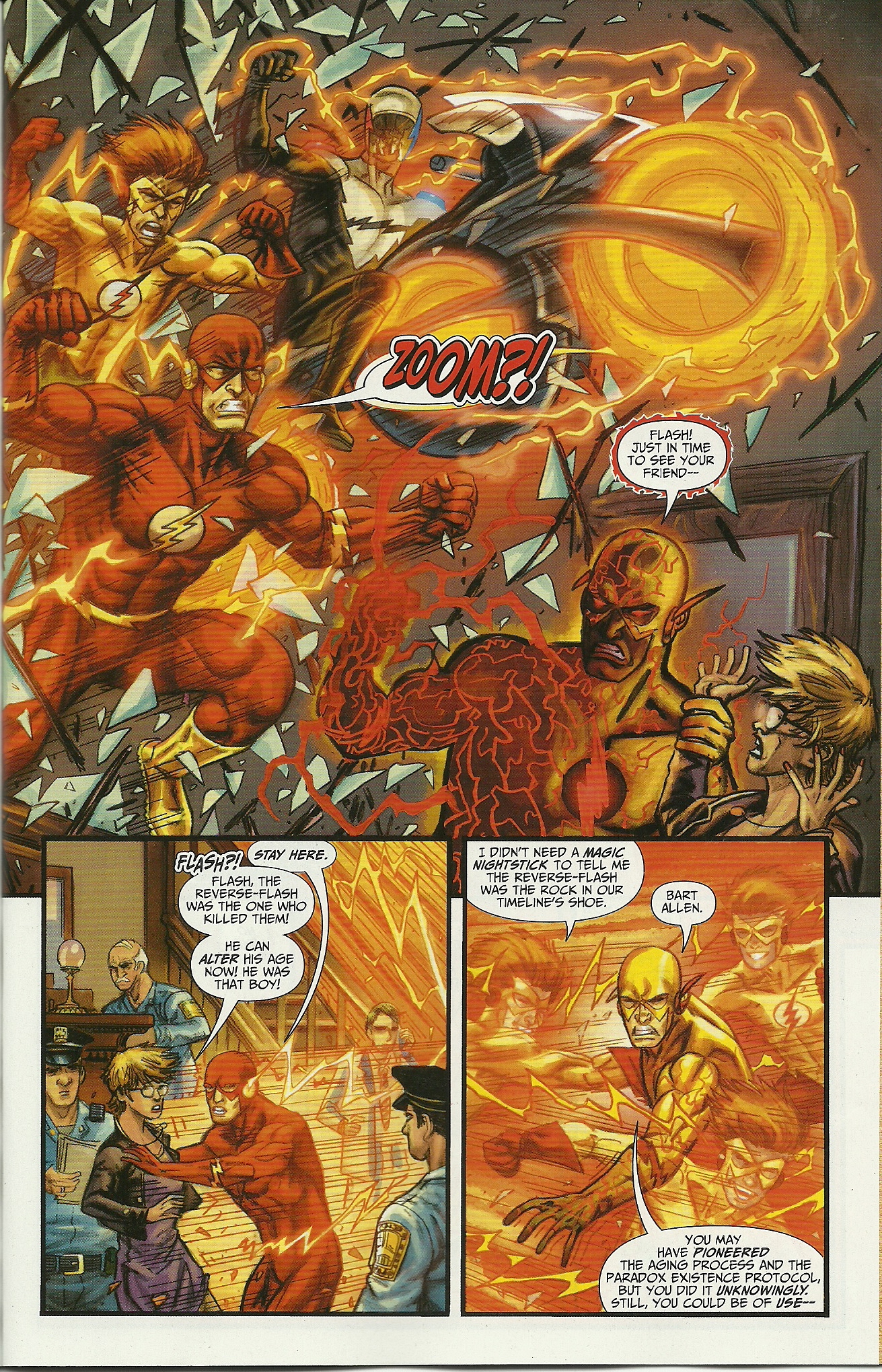 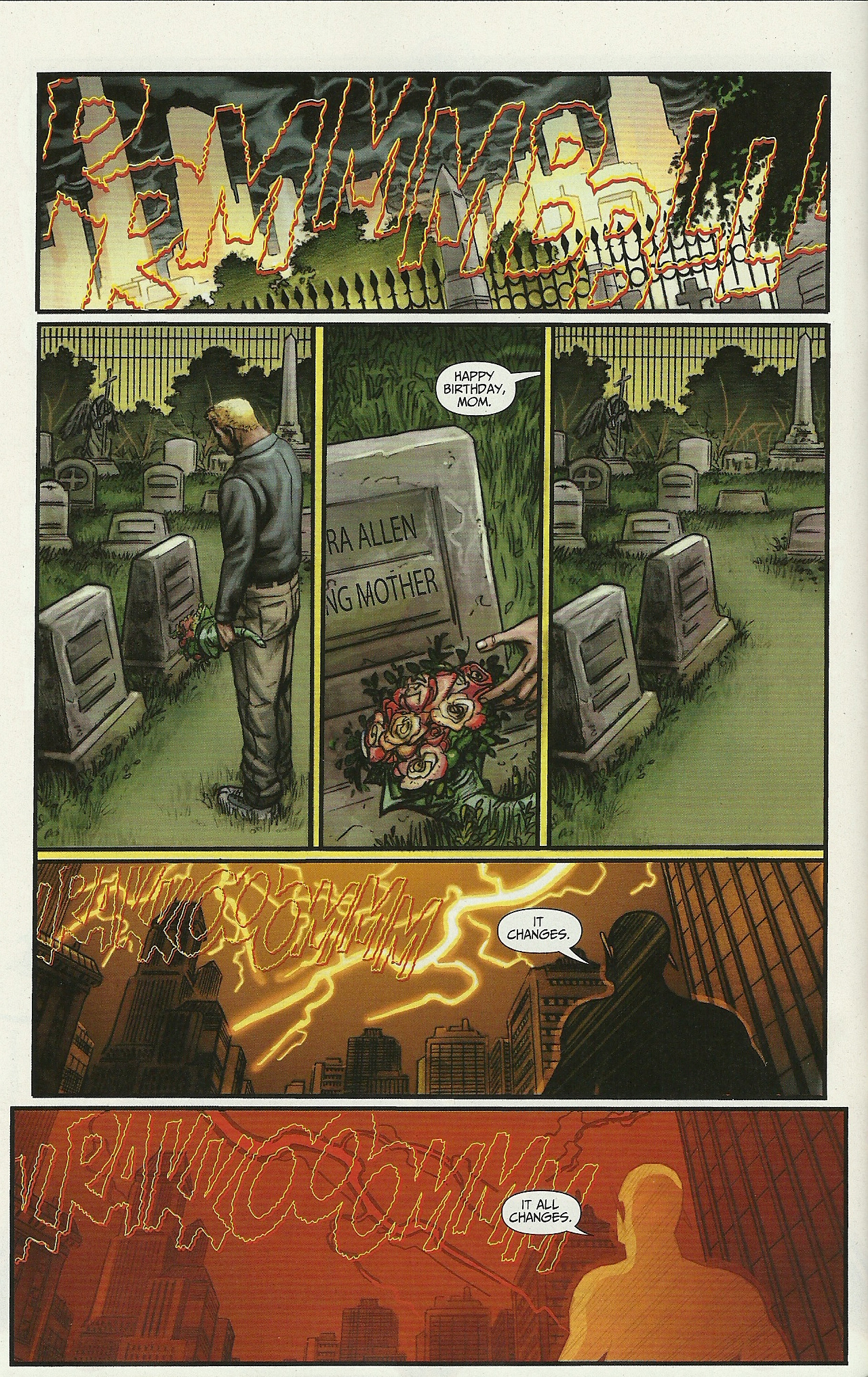 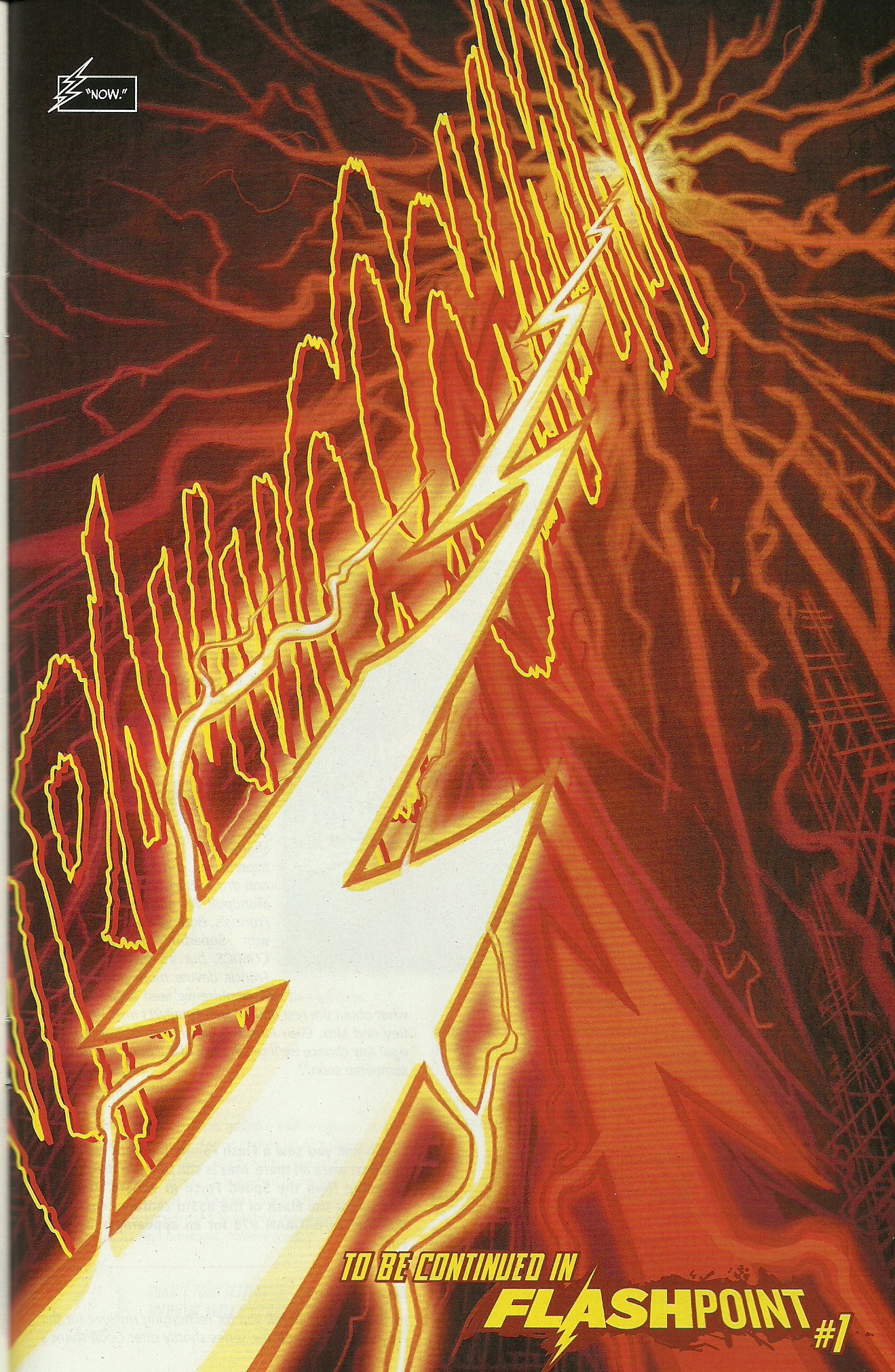 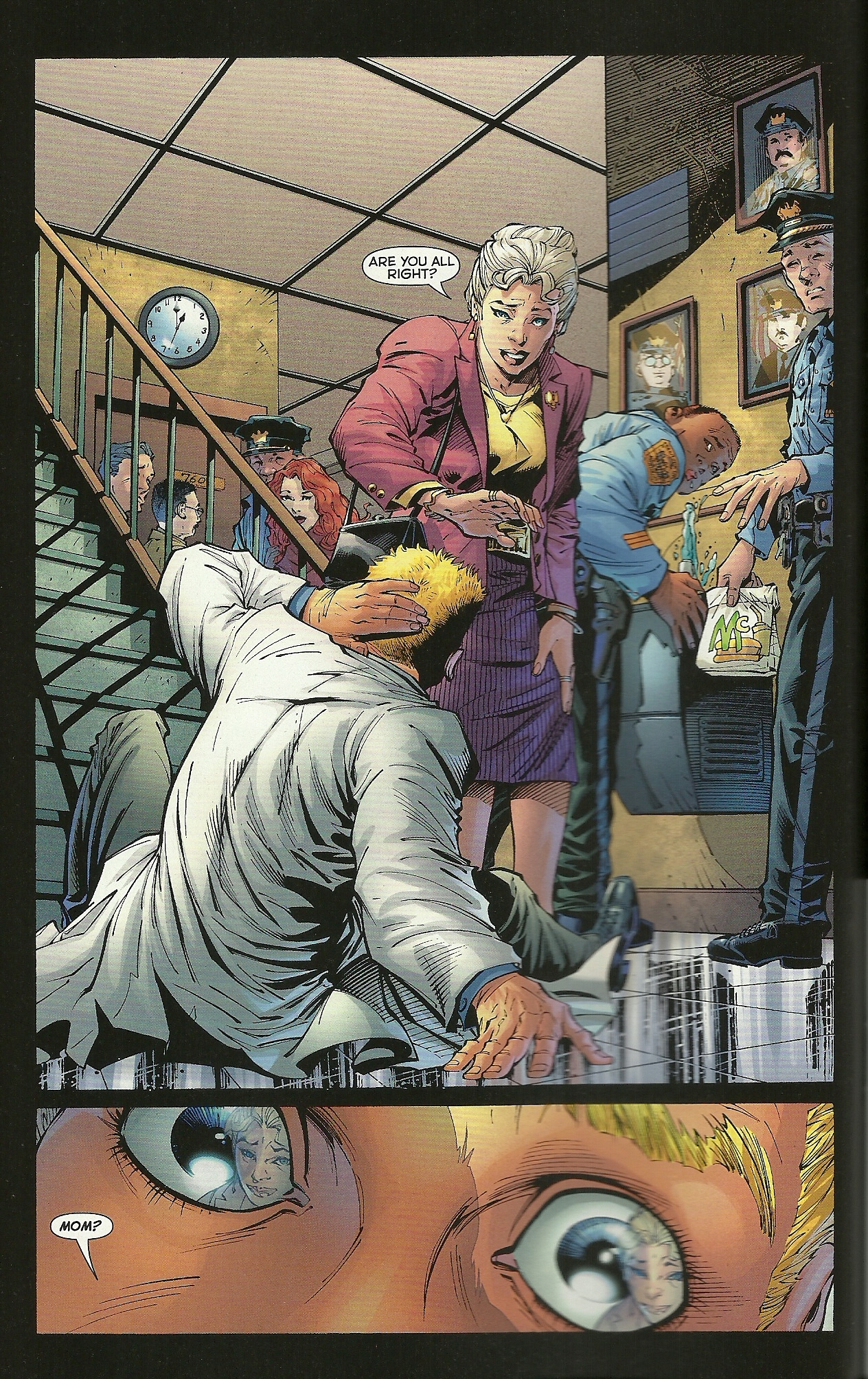 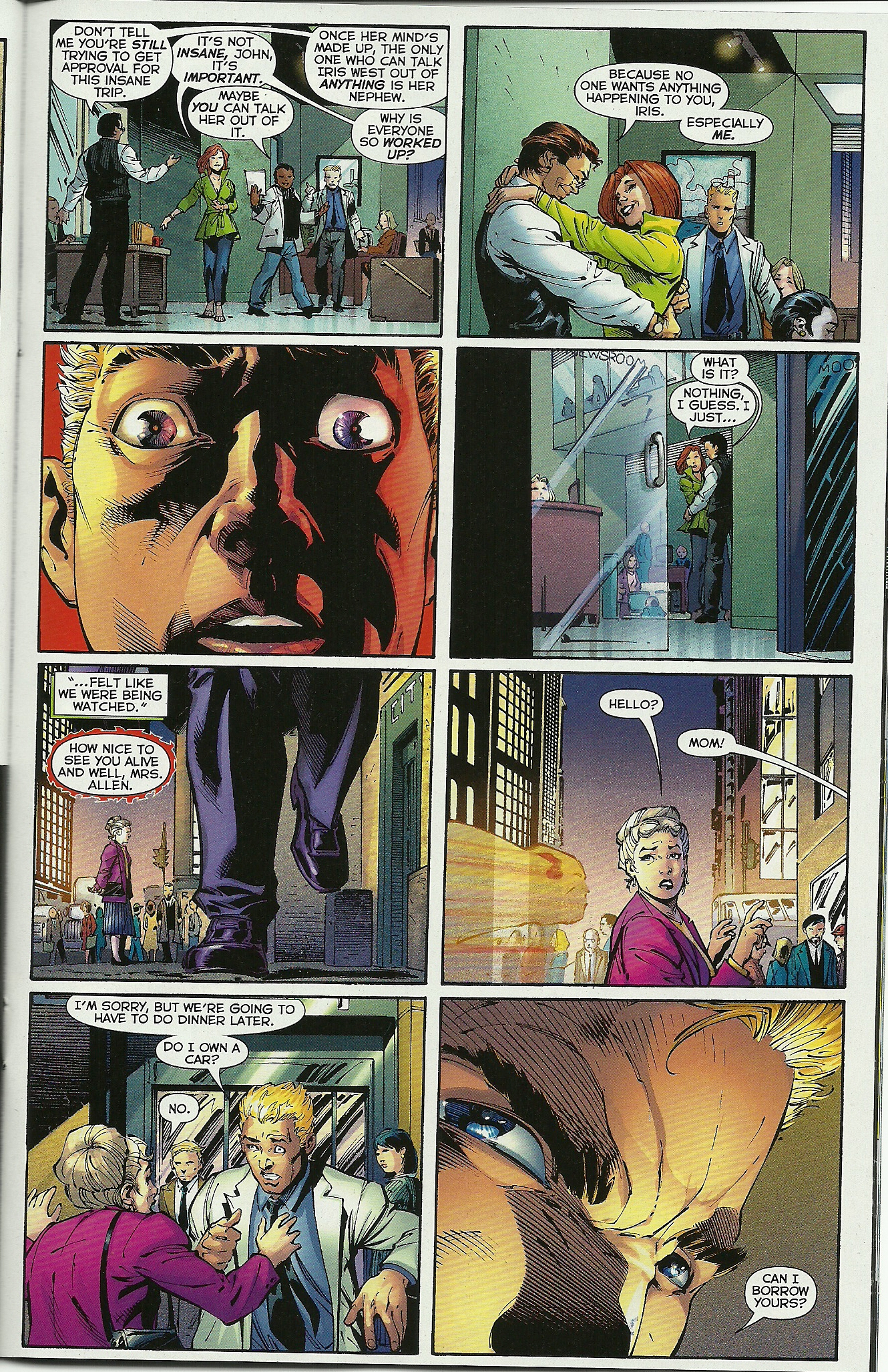 Not only is she back in the realm of the living, but he is clearly interested in her as the only time you see Zoom is in her prescence (see panels 5 and 6 on the right).

Like with Thomas Wayne being the Batman in the Flashpoint world, having lost his son Bruce and wife on that fateful night in Crime Alley, perhaps Barry’s mom is also a central figure. We know that for Bruce to return as Batman in the post-Flashpoint “new” Earth Timeline, Thomas Wayne will need to die (again).

Will Barry’s mom also need to return to the dead to undo the events of Flashpoint? Are parents sacrificing themselves for their children and the world, one of the lessons of Flashpoint?

I mentioned earlier that even if the end of Flashpoint returns to a version of the timeline we know, it won’t and can’t be the same. 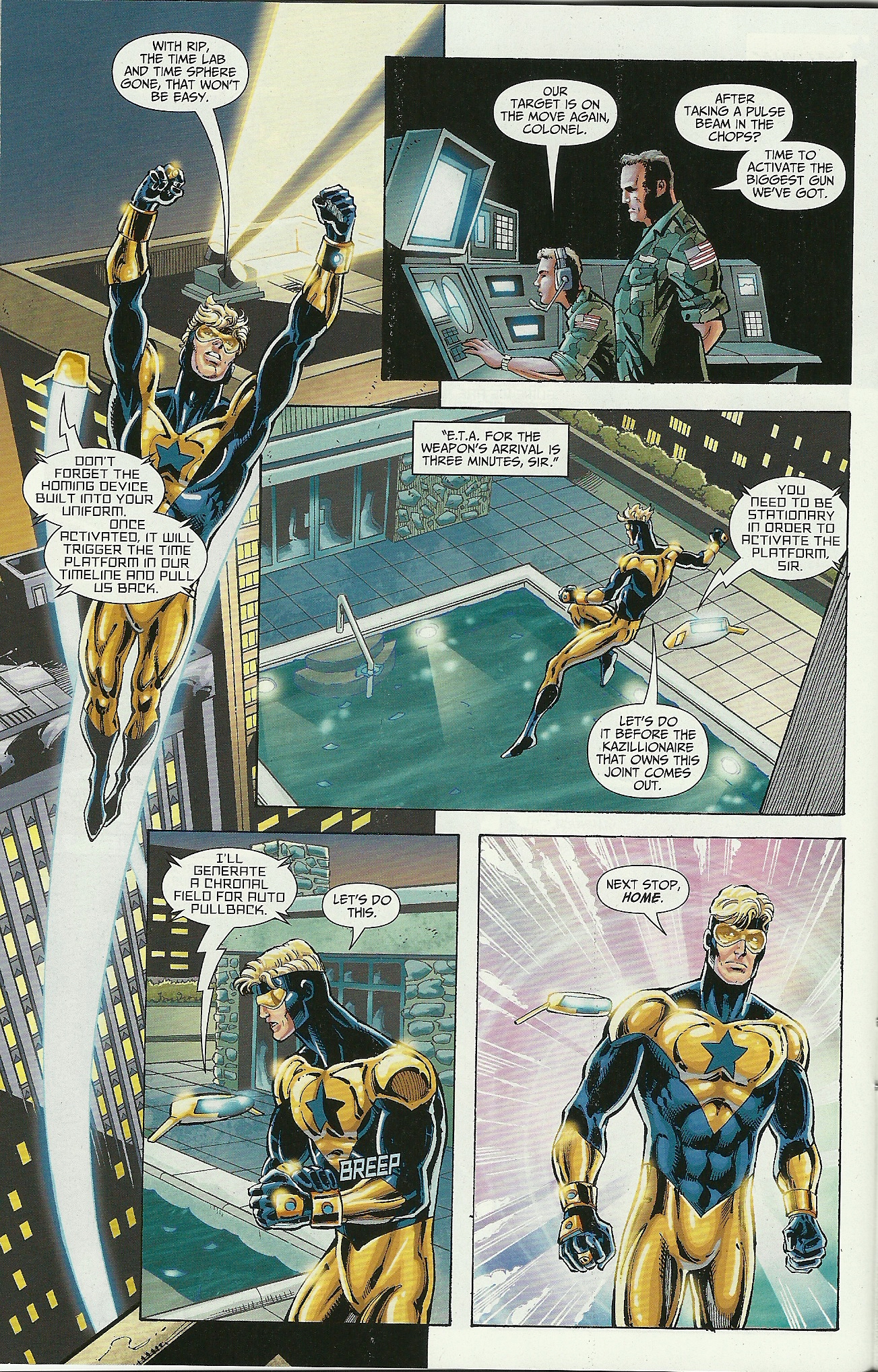 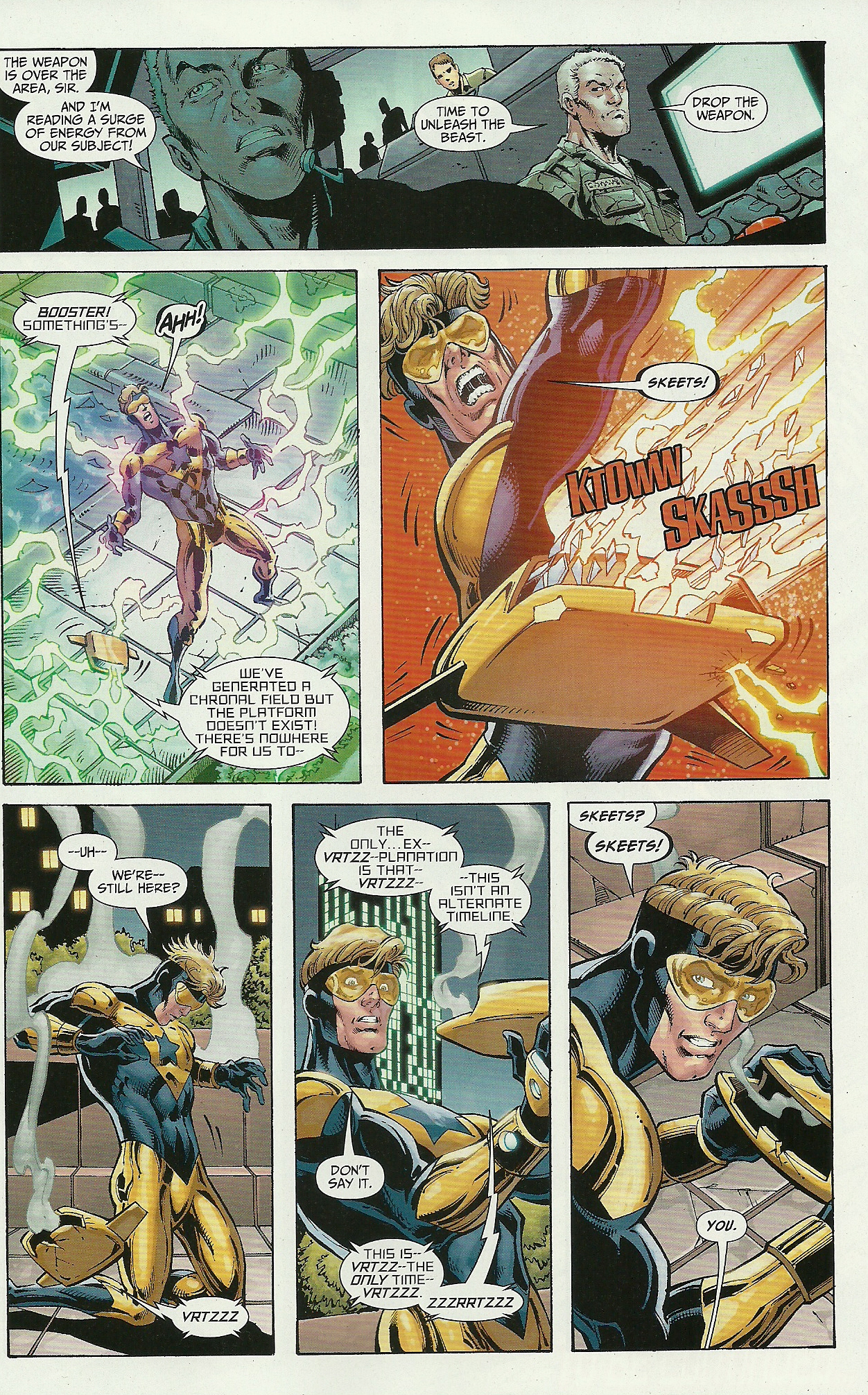 Booster Gold #44 tells us point blank that the old timeline does not exist.

The Flashpoint timeline is THE timeline. It is not an alternate one.

That means that any DC proper book you’re reading now that isn’t Booster Gold, Flashpoint, or any of the Flashpoint tie-ins potentially doesn’t exist or happen in the same way after the eventual timeline resolution at end of Flashpoint.

Geoff Johns and others have said that they will not talk about what happens after Flashpoint yet, but that the DCU will not be exactly the same as it used to be afterwards.

There remain a lot of questions about what’s next for Flashpoint.

However, we do know that despite his demise, someone will be Hot Pursuit in the Kid Flash Lost mini-series. 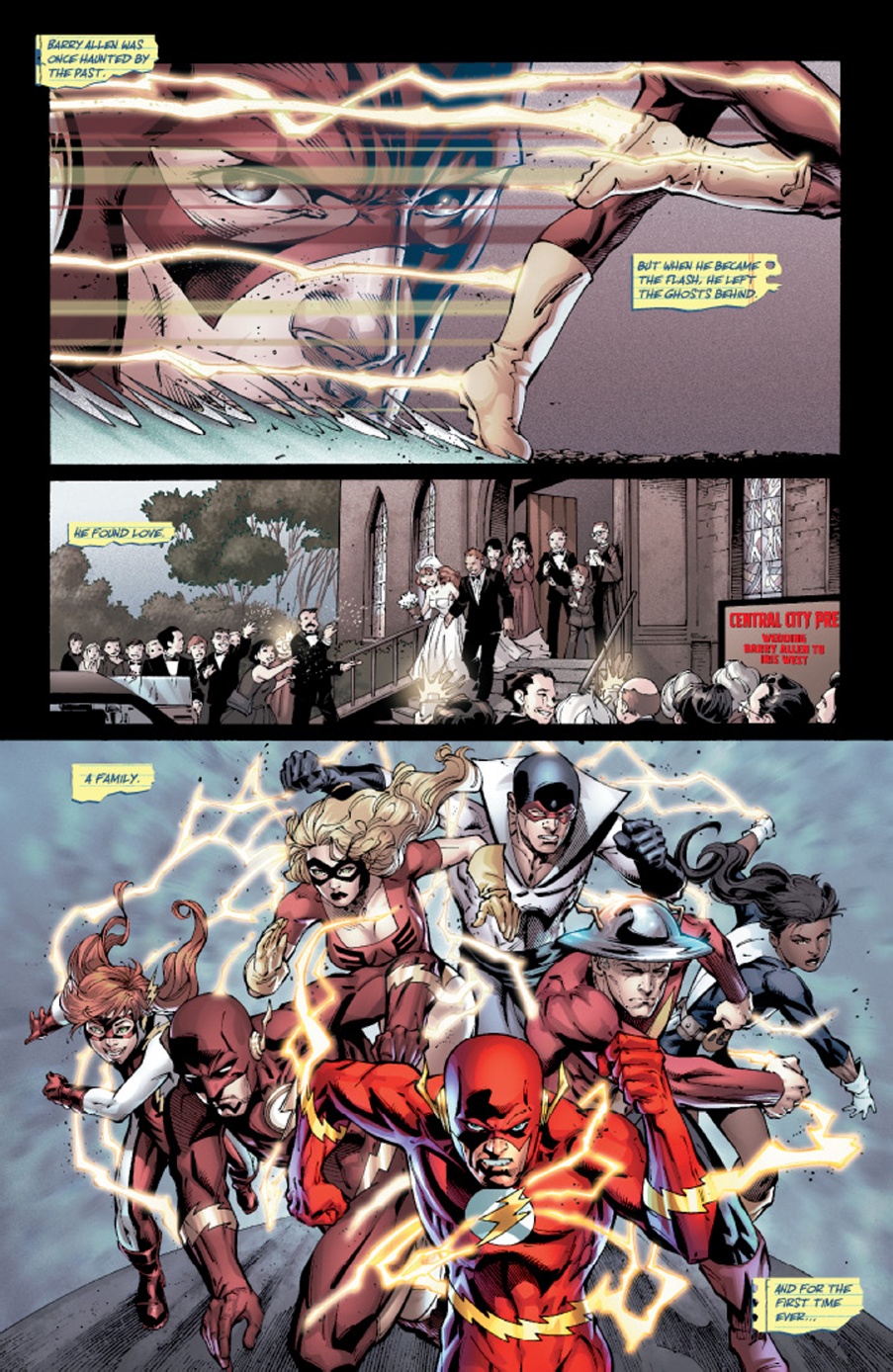 We also know, according to Geoff Johns, that four heroes remember the old DC timeline. Only three we know of for sure: Flash (Barry), Kid Flash (Bart) and Booster Gold. We do know a villain remembers too, namely the Reverse Flash. However, while the fourth hero has not been revealed, my money is on Traci Thirteen since she’s the lead in the World of Flashpoint mini-series. This also fits with DC’s mandate to elevate lesser known DC heroes through events like Flashpoint.

There is also the question of how the Legion of Super-Heroes, in DC’s 31rst Century, and Flash descendent speedster and legionnaire XS fits into all this. She was part of the major error clean-up with the FCBD Flashpoint #1 preview and we did notice a subtle tease to Flashpoint in Adventure Comics.

And, since DC has launched Batman Beyond and appears to be expanding that universe with a Superman Beyond and Justice League Beyond titles, how will Flashpoint impact this future in DC’s timeline to the 31rst Century and beyond?

And, let’s not forget the very first teaser below for Flashpoint in Flash #1. Perhaps the Reverse Flash one-shot is a Barry Allen centric one-shot and not an Eobard Thawne/proper Reverse Flash/Zoom one-shot? Or, is Barry doning the Zoom costume in a post-Flashpoint tease where Barry assumes a new identity as we speculated earlier?

Fun times ahead no doubt. What say you? Any Flashpoint clues make it into your DC comic books lately? 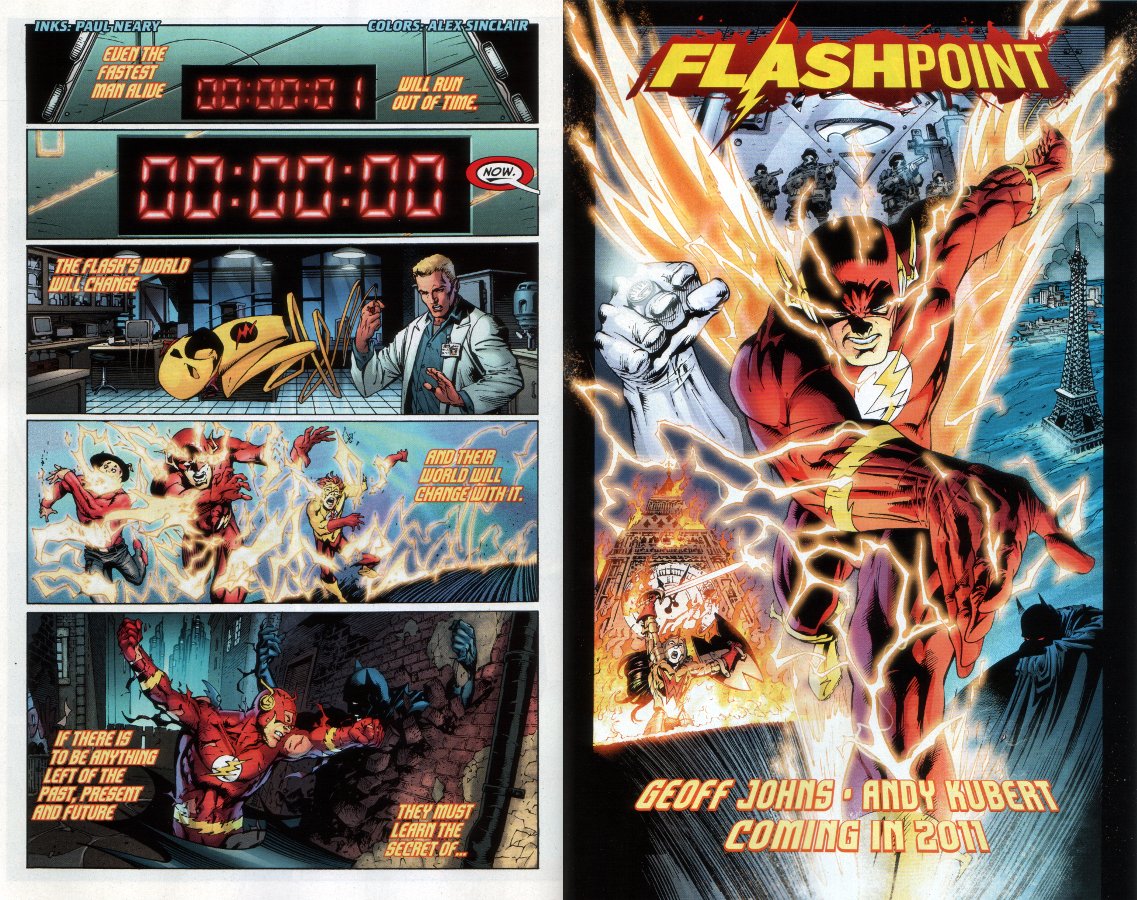