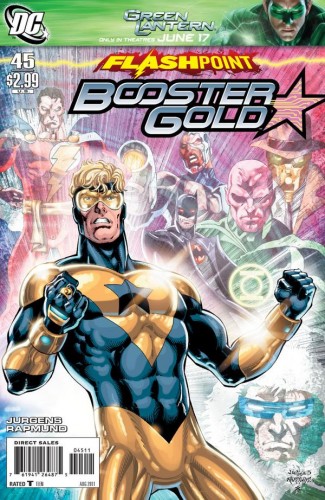 Writing and art by Dan Jurgens

It isn’t enough that he got randomly shunted into a warped timeline, that there’s no Rip Hunter to call in for back up, and that there’s no obvious way out. But then they went ahead and took away Skeets and you knew that Booster was having a bad day! Picking up immediately on last issue, it’s Booster versus Doomsday! Yes, Doomsday! Killer of Superman! And…agent of the United States? Something is rotten in the state of California, hell, in the world of New Earth, but Boost is going to have to survive to do something about it!

The primary story is, obviously, Booster’s attempt at figuring out just what he has to do to fix everything. First he has to get away from Doomsday and those hunting him, as he can’t shake the “he’s Atlantean!” problem that his simply flying around started. He picks up a passenger along the way after getting punched into her window and having to save her from the wrath of Doomsday. She’s…well, she’s kind of annoying to say the very least, at least at the start. She views herself as a hostage, he obviously sees her as someone he got out of harms way and didn’t just simply abandon. He tries to talk to her, and winds up online where he finds out the drastic nature of the changes. While Barry Allen had his counterparts memories flood his brain, Booster doesn’t get that kind of memory dump so using his suits circuitry and future tech to get all kinds of internet info is how they put a little spin on the info dump. The girl is almost too ignorant at times, but Jurgens wisely sets her up to recur in this arc, rather than just be supporting cast fodder for an issue.

Now, as for what the hell is going on with Doomsday in this book, he was found by the government years ago in that underground vault he broke free from. Finding him to be controllable with the right kind of tech, he’s a long range indestructible war machine. One piloted in this issue by General Nathaniel Adam. Yes, that’s right, the would be Captain Atom is piloting Doomsday to fight Booster. The government is rightfully paranoid, but at the same time portrayed in the same manner as most evil or paranoid governments in comics. They are convinced Booster is Atlantean because he was flying, they’ve taken no notice of his game plan of run and not attack innocents, or the fact that the only offense he’s delivered was trying to push Doomsday away long enough to save a woman in his path. They have the typical blinders you’d expect from movie characters, not that it’s a bad thing, to be honest…if the government characters are open minded, you probably have a bigger problem.

How’s the art? Well, it’s Dan Jurgens drawing Booster Gold and Doomsday for twenty pages. All that’s missing is Superman and we’d have covered all the bases for iconic Jurgens 101. He’s a veteran who more than knows how to handle an issue like this, with the action being broken down nicely and incredibly clear. On top of that, there’s a lot of good work with faces and body language, and I also have to credit the battle damage done to DD’s costume throughout the issue.

I had expected going in that Booster would be trying to fix the problems that created Flashpoint, but two issues in and he’s got problems of his own. To be honest, this is a bit more interesting than seeing Booster hop through the time stream to try and right all the wrongs that created this screwed up world, as it feels far less gimmicky. Yes, I know, Booster is a time cop who time travels and fixes things, it’s his gimmick, but I’m far more interested in the goings on of the current World of Flashpoint than to what changes in the time stream were enacted to cause it. I’m also curious as to just who this girl is, and what’s going to happen in the wake of the cliffhanger that we got left off on.

Why am I psyched for Justice League International? Because Dan Jurgens writing Booster Gold can not possibly go wrong.