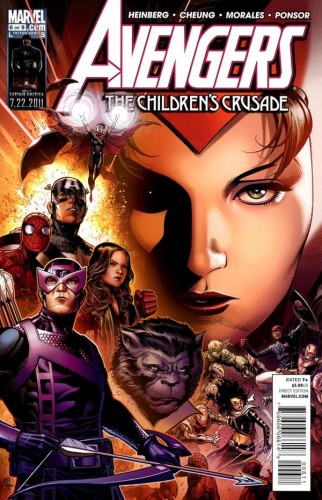 Jeez, I had forgotten this mini was even coming out before I saw it, and then I was surprised it was already to issue six. So I had completely forgot that the last issue left off with a whole mess of happenings, not the least of which was Wanda restoring her own powers after coming face to face with the recently dead version of Jack of Hearts she used as the opening salvo of Avengers Disassembled, and not the most of it is that Scott “Ant-Man” Lang is alive again. There are a lot of cameos, and the issue falls into the range of fan service for those of us who have read Disassembled, House of M, Endangered Species, New Avengers, X-Factor, and even Alias. Yes, this issue is bulky with references to stories that it expects the reader to be aware of, and to be honest, this entire mini has done that in a relatively excessive manner. It doesn’t bother me, I mean, I’ve read all of this stuff that Heinberg brings up, but it puts over the point that this is being written for the long time readers.

This issue makes the first time we’ve seen Wanda of full mind and body since before Avengers Disassembled, so long as you consider that she was still batshit nuts in Excalibur and House of M, and she was sane before Bendis took her under his wing. Heinberg wisely has her immediately fall into the guilt of her actions, because they were relatively heroic by super hero going bad standards and Wanda was always a pretty nice character, but he thankfully doesn’t spend the entire issue focusing on it. After all, he needs pages for Hawkeye to show up and mention how he had sex with Wanda back in New Avengers just after Civil War. Let’s talk about the cameos; Hawkeye, Jessica Jones, and Beast are all around for the majority of the issue which leads to some good character pairings, and a great scene with Hawkeye and Hawkeye (Kate Bishop) that makes two characters with the exact same name fighting side by side feel like the most natural thing in the world. There’s also some great stuff with Scott Lang early on in the issue, which stands out to me as I was a Scott Lang fan for years who wasn’t happy to see him get killed off…and then became a bigger fan of Eric O’Grady, but Scott’s seeing Jessica Jones (who was Scott’s ex before she married Luke…and whom he broke up with because Luke got her pregnant), and finding out his daughter has powers? Great stuff. Then, to top it off, Wanda finally getting talked down answers the frequently assumed answered question of “Is she really Wiccan and Speed’s mom”, and the payoff is nice for what it is.

Heinberg continues to excel at the character moments, and thankfully he spent the vast majority of the issue working with those. The fight scene was incredibly brief, though the dialogue that carried it was great. The second half of the issue moves its focus to whether or not they can fix the things Wanda has done, now that she has the potential to maybe do something about them. This raises the question of how to undo M-Day, and whether or not she would have the right to just give all mutants their powers back. The end result is finding one former mutant who is willing, and for that they call in X-Factor. When I said before that this issue is filled with references, I wasn’t kidding, X-Factor shows up to give us a complete rundown of Quicksilver’s usage of the Terrigan Crystals during Son of M and in the early issues of X-Factor. Either someone gave him bullet points, or Heinberg is a hugely loyal reader with an encyclopedic knowledge base (in which case he gets my utmost respect as I felt he did a great job with embracing continuity), but this issue tackles the counterpoints as well as the questions and makes for a really fun story.

Jim Cheung is always a blast to see art from, and that in turn always makes me wish he could fit to a regular schedule. The massive delays on this book are killing it, and since I can’t fully figure out just how the hell it fits into continuity anymore and have quit trying, I’m going to blame that on him. This is what I call a Marvel problem, to be honest, and that isn’t to say that other companies don’t do it too, but Marvel has been promoting this book for YEARS! YEARS! There have been six issues since September of 2010, as well as a special bonus one shot tie-in issue with awesome Alan Davis art to ease some of the pressure on readers. The book has been coming out about every two months, but how much lead time did Cheung have? Do Secret Warriors covers take that much out of him? He’s a phenomenal artist, and I would love to see more of his art, but he doesn’t seem to have a ton of regular projects, so why can’t he knock a nine issue mini out in short order?

I went from forgetting about this series, to remembering that it was annoying me, to enjoying this issue to a ridiculous degree. Heinberg gets away from his “Wiccan and the Young Avengers” version of the team that has dominated this series thus far, and lets some of the other characters get moments in. Not the least of which is the cameo heroes who don’t come across as forced, and who all remain pretty in character. The end of the issue isn’t so much a shocker as it is a big open ended question of just what is to come, and it’s very possible that my rant about Cheung being late is completely off base. There’s a possibility that this story fits in after Steve becomes Captain America again, but at the same time, my gut tells me that it could also be used as a way to blow off delays that shifted other stories around. We’re set to get another big fight next issue as another group of characters comes looking for their pound of flesh from the Scarlet Witch, and it’s one I definitely want to see.

To be completely candid though, there are only two real things I care about coming out of this mini; what happens to Wanda, and what happens to the mutants. As much as I love the Young Avengers as a concept, I have no idea what Marvel has planned for the group, but after the several year hiatus between volume one and this, I don’t exactly have faith in a new Young Avengers ongoing series launching in the aftermath of this. I’d totally buy it if it were to come out, but I just don’t expect it, which actually makes the entire series a little bittersweet…and possibly explains why the title doesn’t say “Young Avengers”.

DC Comics & Batman: Urban Legends #14 Spoilers & Review: Who & Why Are The NEW Birds Of Prey?! Demythify!