Review: Daredevil: The Man Without Fear #1: By Mark Waid and Paolo Rivera 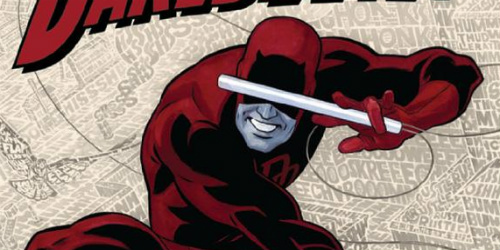 I don’t just mean Matt Murdock, I mean the Daredevil I’ve waited almost a decade for. There’s a line from the the back up story contained in this first issue that I’d like to open with:

“I know I’ve been acting a little uncharacteristically? Since I returned, Foggy. But here’s what I need you to appreciate, okay? It has been a miserable last few years. And every time I thought I’d finally hit bottom, God somehow found me a bigger shovel.”

Brian Michael Bendis took us back to the days of Frank Miller’s Hell’s Kitchen, a gritty, hopeless area of New York where one man walked the line to stand up to the bullies who lorded over it’s inhabitants. Bendis took Matt Murdock to heights we never thought Daredevil would tread, and then pushed him lower than we ever thought a devil could go. It was damn good storytelling, and a defining piece of Daredevil history.

Ed Brubaker took the reins of Bendis’ dirty noir vision and pulled Matt Murdock and his supporting cast even further down, testing his limits. He brought back the Hand. It was a solid arc, and I enjoyed every issue. I couldn’t believe Brubaker was doing what he was doing to my favorite Marvel hero.

Andy Diggle came after, and further ratcheted the dial on grim anti-hero noir and balanced it with more of Daredevil’s ninja-lore. It is here Daredevil, for all his stubborn, New York perseverence, faltered.

When I look back at the past decade, I find I have a strong attachment to every writer, every artist, who has contributed to Daredevil. I enjoy every arc, every interpretation, and eagerly buy every issue. But despite being my favorite Marvel hero, something was wrong, and I realize it only when I look back on the years.

Daredevil never came up for air. He soaked up the dark, Wagnerian torment that made him look so perfect, perched on a church steeple in the pouring rain. I have no doubt that Frank Miller’s Daredevil run and Daredevil: The Man Without Fear were heavy influences on all the teams that tackled the book. Yet, there’s a quote from Miller himself, in The Dark Knight Returns 10th Anniversary collection, where Miller notes that for all his Daredevil enthusiasm, his editor, Jo Duffy, would often tell him over the years: “That’s a Batman idea”.

I believe Mark Waid felt this way, too. Waid realizes that Daredevil is The Man Without Fear. This is a Daredevil I’ve loved since Ann Nocenti’s days. To borrow from Waid’s pitch:

“…he’s the only Marvel hero who lives totally in the moment. He doesn’t worry about what happens next, nor does he allow himself to be haunted unendingly by his past. He’s been through enough agony to have confidence that nothing will break him and (more importantly), that no pain lasts forever.”

Waid nails it, for this reader. Waid and Paolo Rivera make sure the Daredevil smiles early and often, and it was that classic Daredevil grin in the opening battle where I knew this book was going to bring back the Daredevil we’ve missed for nearly ten years. Ever the swashbuckler, he even steals a kiss from a bride.

We open with Daredevil “admiring” beauty, every facet of it. Smells, sounds, textures, even appreciation for what he can’t experience but knows is there. This is a man who revels in life. He’s crashing a wedding because he believes there will be a hit ordered. He’s correct, and Rivera and Waid choreographed one of the better fight scenes I’ve seen all year. I said it. I enjoyed this fight scene more than the big events. Thank you, Waid and Rivera (Paolo on pencils, Joe on Inks).

As Daredevil has been outed as Matt Murdock previously, Murdock narrates how he’s tried to put the cat back in the bag and simply move forward with his life, denying it is so. It’s not a clean fix, nor a magic fix. It doesn’t even work. The press and city don’t believe it. It costs him a court case. The Assistant DA even asks him to just come clean. He won’t.

But when he’s given a tip involving the court case he was excused from, Daredevil suits up, and is waylaid by…

The script is perfect. Waid, as ever, is a super hero’s writer. He knows how to balance the man and the hero. He knows how to make it seem as if the hero won’t survive. He’s a perfect fit for lightening Daredevil‘s mood. The supporting cast is given as much attention as Murdock, even the coffee vendor has depth. If I have one complaint, it’s that the tease of a cliffhanger could have used just one more page of action, and I only say that because the opening was so good.

Paolo Rivera’s pencils are to Waid’s story what Alex Maleev was to Bendis’ Daredevil: a perfect match. To fit Waid’s uplifting direction, the linework is clean, panel layouts move the story effectively and with minimal effort, and the “radar sense” looks awesome and is just new and different enough.

Javier Rodriguez rounds out the art duties with the ever important colors, and once again, is a fantastic fit for the entire team. This looks like a Marvel Super Hero comic, with popping colors, a vibrant New York City, and a brightly clad hero. Even the dark scenes aren’t awash in shadows, just darker tones, and it compliments not only the art, but the very feel of the world and character Waid is committed to.

There’s a backup story, also penned by Waid, with art by Marcos Martin and Muntsa Vicenete. The story is a reminder from Waid that this is Daredevil’s own brand new day. An optimistic and lively Matt Murdock invites his best friend and partner on an errand of import, and while Foggy groans and whines, Matt points out every little beautiful thing in life. This short story hits home for me, as their oddysey through New York City reminds me of my own walks through Toronto: savoring the sounds of the city, from the traffic to the subway musicians. A pretty girl and her fragrant shampoo, the food. The very essence of life that so many people take for granted.

Matt Murdock, who has been through so much, wants to live. Daredevil has always inspired me, and as I get older, he continues to.

I hope Waid’s run eclipses his other projects, because this is the super hero and role model I’ve been looking for on the comic rack lately, and he’s right now, he’s in my favorite Marvel hero. Waid and Rivera have managed to pay homage to Miller, Nocenti, Bendis, Romita, Quesada, Smith, and all the other people who have poured their soul into this title, this character, and still managed to put their own spin on it.