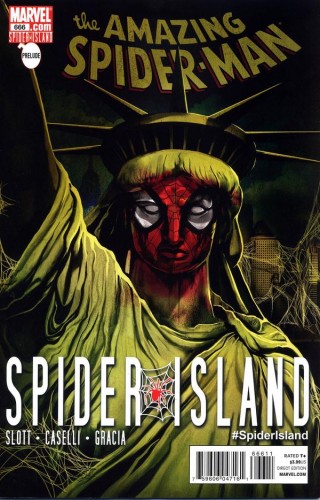 Amazing Spider-Man#666
Spider Island Prologue: The One and Only
Written by Dan Slott
Art by Stefano Caselli and Marte Gracia

It’s finally here! Marvel’s big summer event! Spider Island! Forget those hammers, this is where the real action and Marvel magic is.

Spider-Man. Once the underdog New York superhero, now a big shot Avenger (times two), a member of the Future Foundation (Fantastic Four in case you’re out of the loop. Once a put upon photographer and teacher, now a super-scientist at Horizon Labs. He still has the hot girlfriend, he still has his old Aunt May, he still has his amazing friends. But Spider-Man just isn’t the little wall crawling wallflower he used to be.

Spider-Scribe Dan Slott’s no fool, though. Slott knows that when Peter Parker, the Spectactular Spider-Man, is succeeding at life, there is no better time to slap him back down. And that’s what Spider Island looks to do. Here it is, the feel good event of the summer.

The opening of Spider Island is amazing. This double sized issue allows anyone, anyone at all, to pick up the story, be drawn into Spider-Man’s current status quo, settle into it’s web of intrigue, and then be prepared for the ride. Right off, the issue succeeds by being a perfect jumping on point. I’ve reviewed enough of Marvel’s .1 initiative to know what a good and a bad jumping on point is, and this issue is perfect. Out of loop? You’re all caught up with this one issue, ready for the event. And it never feels forced or unneccessary. In fact, it’s a very neccessary mood setter even for the most hardened Spidey fanatic (guilty).

We open with The Spectacular Spider-Man swinging through New York taking out petty thugs. Spider-Man loves his job, and the people love Spider-Man. The victims thank him, the police appreciate him. Mayor and nemesis J. Jonah Jameson even has falling approval numbers because of his anti-Spider-Man stance. Spidey helps out Spider-Girl, Firestar, and Gravity against an old foe in an embarrisingly easy takedown.

We blitz through a day at Peter Parker’s office life before being thrown into a Future Foundation situation, and immediately hightailing it with Ben Grimm towards the Avengers’ poker game. This is Spider-Man’s life now, this is his day.

So of course his girlfriend has to ruin it with the “We need to talk” phone call. And if one woman trouble isn’t enough, Julia Carpenter (formerly the second Spider-Woman, now the psychic Madame Webb) shows up to let Parker know that a great trial is coming his way. A trial he might have to kill to get out of.

Peter Parker, on the sunny side of the street, and as usual that means he’s about to get caught in a thunderstorm without an umbrella.

Of course, these things don’t just happen. He’s not some cosmic joke, he’s always suffering at someone’s expense. And so ties in his old foe, The Jackal.

Yeah. This is classic Spider-Man here. Dan Slott knows what he’s doing. I’ve reread the issue five times, it stands up on it’s own, but I’m dying for the next chapter, here.

Dan Slott’s story has done the impossible, and not only taken the convoluted continutity life of the current Marvel Spider-Man, embraced it and thrown it back into history and the massive supporting cast (Jonah’s here. So is regular Betty. And Flash, who is now Venom. Aunt May, but she’s shipping up to Boston. That’s just a taste). The dialogue is clever, the captions are helpful, and you never feel lost in all the continuity being refereced from the recent Spider happenings. The script moves along briskly, but doesn’t read as fast paced as some other snappy Marvel writers. You feel like you’re getting your money’s worth of story.

A good script means nothing without the visuals to sell it and draw you in, and that’s where Stefano Caselli and Marte Gracia come in. Caselli is as iconic a Spider-Man artist as Mark Bagley or Mike Weiringo; not only does this feel like a super hero comic, or a Marvel super hero book, it looks like Spider-Man. It’s distinctly Spider-Man, in the kinetic energy, the city, the hangdog expression on Parker’s face.

Caselli covers a massive, distinct cast, with Dragon Man, a kung fu fight, and spider monsters all in one breakneck pace. And he’s pefectly at ease with it. Caselli’s costumes look like costumes on the people who he draws as people. It’s a surprisingly rare thing to be able to do in comics, look around.

And Marte Gracia’s colors just cement Caselli’s linework and Slott’s intents. It’s subtle, but midway through the issue there’s a gentle shift in tone, and at first glance, it’s obviously the night and day cycle. But it isn’t. The colors suddenly go from this bright, super hero world of awesome, to a sudden coldness. I like to think it’s intentional, because Gracia particularly flavors Jackal’s scenes with a stark menace. In any event, the colors here pop and add life to the world and characters. It feels like the Marvel I grew up with. It feels like Spider-Man.

Spider Island sounds absurd in concept, but it’s just ridiculous enough in that Mighty Marvel Manner, where you do a double take, but then just roll with it because it’s so…Marvel. This issue is a fantastic starting point for the event, and if you haven’t tried Spider-Man recently, this is where you’d do it. It’s a love letter to all things past and present and future with Spider-Man. From what I’ve seen of the event, it’s only going to get better. This issue isn’t just great, it’s fun.

Seriously. And isn’t fun something we want from our comics?

Thank you Dan Slott, Stefan Caselli, Marte Gracia, and the rest of the Marvel crew for putting your blood and sweat into this story.I was leery at first when it was announced, but I’m ready to dive in and swing along, just because of the amount of respect and dedication I’ve seen in this issue alone. Not that ASM was suffering before or anything.