Etrigan has always been a favorite character of mine.  So when I heard Paul Cornell was writing this book, it definitely was one of the Relaunch books I was most excited about.

Summary (contains spoilers): Demon Knights starts out with a prologue set in Ye Olde Camelot. Actually, the last day of Camelot to be exact. As Arthur is taken to Avalon by ship, a bearded knight of the Round Table is left behind with Excalibur and orders to  turn the sword over to the Lady Of the Lake. Madame Xanadu leaps off the ship to try and recover Excalibur, and is stopped by a voice that says, “This must happen! It always will! You cannot change it!”

Meanwhile, Merlin is chatting with his summoned demon, Etrigan. A young man named Jason of Norwich enters, telling Merlin he must flee. Merlin realizes what needs to be done (a destiny that will take centuries to come to fruition) and bonds Etrigan to Jason of Norwich, who is revealed to be Jason Blood.

The story moves forward to the Dark Ages. A caption tells us that “The Horde of the questing queen marches north.” We see the queen has just sacked a city, and tells them to bring forth the youngest of the village. Her wizard Mordru turns the young man into a demonic creature. 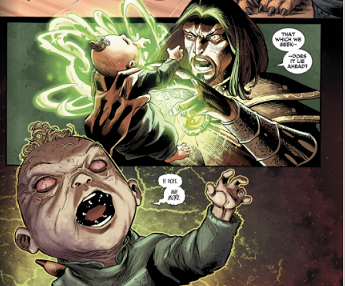 The Queen and Mordru are looking for something and the demonic child tells them they are heading the right way to find it. Demon children…even better than Google. Before the demon baby can say more, it explodes.  Their search will lead them through the small town of Little Spring.

Meanwhile, a rather foul mouthed Xanadu and Jason Blood are also heading towards Little Spring. They are disguised as pilgrims, which Xanadu says will never work. Vandal Savage wants to be let into an inn, they refuse him so he smashes his way in. We find out that Xanadu and Blood had encountered him almost a century before, so they decide to join him for a pint.

In the inn are a female calling herself the Shining Knight, a foreigner who deals in mechanisms, and what seems to be an Amazonian named Exoristos. It’s sort of like the Star Wars Cantina meets Medieval Times. I do have to say, these two pages might just be some of my favorite pages I’ve ever read in a comic: 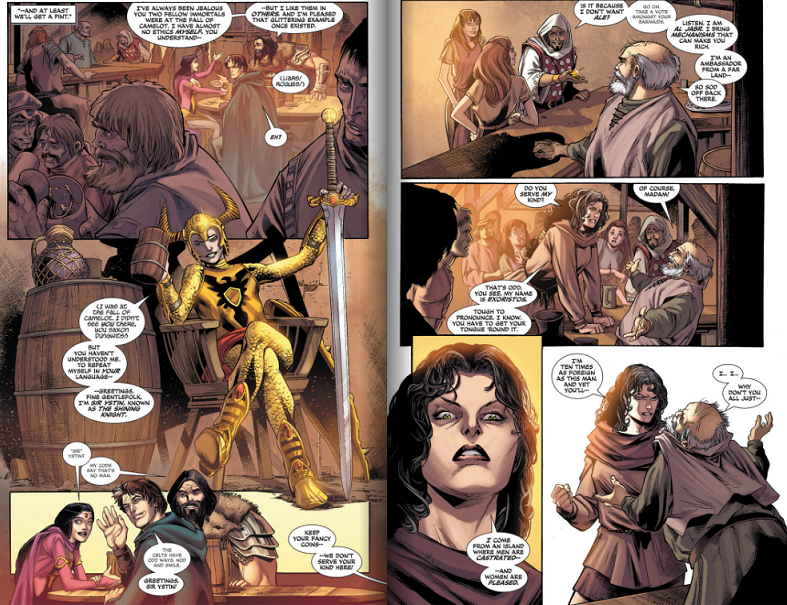 The Outriders of the Queen’s Horde arrive in town. Jason unleashes Etrigan, and we find out that Xanadu and Etrigan are bumping uglies…in Etrigan’s case REAL ugly. The rest of the motley crew joins in the fight. Sensing magic at work, the queen and Mordru send dragons to even the odds.

Review I had planned to do this review in rhyming couplets, but I was disappointed to see that Etrigan didn’t speak that way in this comic. So I will give a little doggerel later, but you will be spared for the most part. But Cornell still managed to give great characterization for Blood and Etrigan. Actually, all the characters got a lot of characterization, especially considering how much was going on throughout the entire book.

At times this book is dark and disturbing, and rapidly shifted tone back to humor. I actually laughed out loud twice in this book. I don’t often expect to find this much humor in comics that feature exploding demonic babies. Well, other than Arsenic Lullabies…

I also love the characters Paul Cornell picked for the book.  Shining Knight was great in Grant Morrison’s Seven Soldiers. Mordru is one of my favorite villains. LLTL! Vandal Savage was very entertaining. I even liked Xanadu’s olde English cursing.

Demon Knights is pretty much wall to wall action. Every moment of the book is packed with energy. I was surprised by how quickly I read through it, but I didn’t feel at all disappointed or ripped off. I just wanted the next issue in my hands as soon as possible. It really felt like a quest book in the vein of Conan or Sojourn, two books I have always had a great affinity towards.

One thing I did find amusing was that everyone in the beginning of the book was wearing hooded cloaks. I was gonna complain that it would be impossible to find “Mystery Woman” but then she pops up blatantly as we switch to the dark ages.

Diogenes Neves really found a great art style that works in this book. All the characters looked so distinctive. In most comics, the characters have flashy costumes, but Neves managed to nail down a more subdued by just as effective way of giving each character a very unique style and appearance.

And as promised, bad rhyming couplets:

As a Legion fan, my heart leapt in joy.
When Mordru transformed that boy.
That wicked wizard is most mean.
And is nailing the hot, dark queen.

Vandal Savage was most unexpected.
The Shining Knight was in gold protected.
Xanadu, Etrigan, and an Amazonian bitch.
Round out our cast of characters quite rich.

Where this quest leads, I know not.
But I am glad I gave this book a shot.
Cornell and Neves are team without match.
Demon Knights deserves your hard earned scratch.

Final Score: 9.5 – I love a good quest comic, and this one was exceptional. Loved the cast, loved the art, loved the story. Demon Knights might be my favorite relaunch book so far.