Spoiler Warnings: What Former Justice Leaguer And Super-Scientist Is Now An Agent of S.H.A.D.E.?

Lots of us have been wondering where some of our favorite heroes have ended up now that the DCU has been rebuilt from the ground up. Are you a Ray Palmer fan dissapointed that Ryan Choi shall be the league’s resident mighty-mite?

Never fear! Ray Palmer made a surprise appearance this week as S.H.A.D.E.’s resident scientist liaison to the United Nations, making him a part of Frankenstein’s supporting cast. 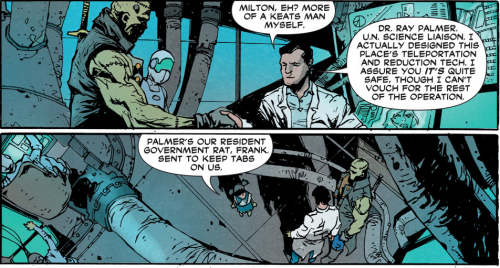 Why Palmer you ask? Well, it just so happen’s that S.H.A.D.E.’s new HQ is a miniaturized city that can only be accessed by a combination teleportation/miniaturization ray designed by, you guessed it, the venerable Doctor Palmer.