So, with the hullaballoo about the Deathstroke and Suicide Squad debut issues as part of the DC Comics Relaunch New 52 initiative, I thought I’d give these books the special spotlight. I am a long-time fan of both afterall. Here’s my take on both books.

Deathstroke #1: Kyle Higgins takes the helm of Deathstroke, DC’s pre-eminent mercenary, alongside Joe Bennett on pencils and iconic inker Art Thibert. This is a darker take on the character as Slade Wilson, and his Deathstroke’s alter ego, opens the book mid-assassination attempt. He is described as a scary bada$$ meta-human mercenary and through various displays it would appear that he is A LOT stronger and agile than he was pre-Flashpoint. Slade also carries himself like he is THE man throughout the title. The Deathstroke pitch seems to be “a one-man mission-impossible completing jobs by any means necessary” (I’m sure Higgins wrote it up more eloquently in his proposal).

The book opens with a successful assassination of a Russian crime figure with Slade later finding himself reluctantly on a “team” of teens for his next contract (interesting based on his pre-Flashpoint Teen Titans interactions). The teaser images DC released over the last few months show that other mission: Deathstroke midair leaping from plane to plane and opening the fuselage with his enormous sword. From there the mission goes sideways and future plot points are set up. 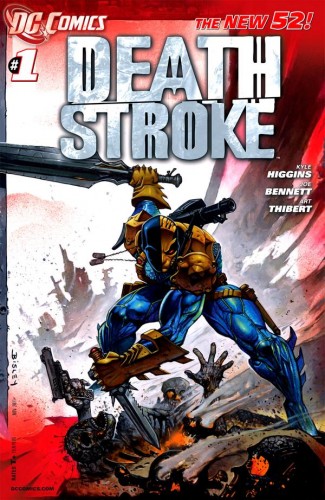 This is not your papa’s Deathstroke. It is a darker, less honorable, and perhaps a more honest take, on the life a mercenary. He’s not supposed to be likable. However, this poses a real problem creatively and from a marketing standpoint for a book that is supposed to have a compelling lead that brings readers back month after month. Higgins achieves that through the plot points he sets up that turn Slade’s world upside-down.

As an older character, there is a buzz in this new DCU that Deathstroke may be over the hill and as a result is not as feared or relied upon as he once was. This challenge is compounded by a mysterious briefcase, whose contents we don’t see, that together seem to set up a Deathstroke-against-everyone plot. Even if there is no honor or moral code evident (yet?) with the titular character (evidenced by the much debated final scenes of the book), this interpretation may work as it will set Slade up against characters that are even less likable and certainly more villainous than he is. Slade is there as a mercenary to get his pay day. His antagonists through this new series will likely have other more sinister motivations that in comparison to Deathstroke, will make him more likable, or at least the lesser evil that one can “root” for in the book.

All this is advanced by the gorgeous art team of Joe Bennett and Art Thibert. Dynamic pencils, great facial expressions, vivid backgrounds, all help the story leap off the page.

Do I like the fact that Slade does not seem to be a man of honor any longer? No. I like that he had a moral code that he stuck to, but to be fair DC has had an inconsistent portrayal of the character before and after his last ongoing series in the 1990s. He vacillated between outright villain in the early 1980s, to an honourable mercenary in the 1990s, to a villain again in the 2000s to whatever-he-is-now in the new DCU. All that said, by keeping Slade true to the non-glamorous life of real-life mercenaries, and by changing the world around him, this may be a take on a less-than-virtuous character that may resonate with readers. One man against the massive machine of villainy sets up a root-for-the-underdog mentality that appeals generally-speaking to many readers.

This book has complex, honest characterization, intriguing plots, with matching vivid art that services the story. Will I be back next month? You bet and likely longer.

Suicide Squad #1: Adam Glass takes point as writer of DC’s modern interpretation of the Suicide Squad, a work-for-amnesty black ops program where super-villains take on potentially suicidal missions on behalf of the government kept in check by the threat of death. Damned if you, damned if you don’t. Federico Dallocchio carries the pencilling load of this debut issue, but will be replaced with issue #2, which is unfortunate as his artwork really suits the book.

The book opens with our team right in thick of action. We are introduced to a shrewd yet insane Joker hanger-on Harley Quinn, fan favorite Batman villain marksman Deadshot, a new hammerhead King Shark, and a few others including a new Eli Diablo, a fire wielding priest haunted-by-tragedy this time around. 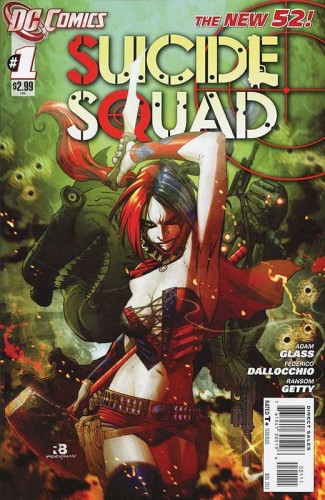 The team is being harshly tortured, and through that plot contrivance, we learn more about what makes each villain tick and what code they live by or don’t. Through flashbacks we learn how the team ended up in this unfortunate predicament.

I don’t want to spoil too much, but this is the first of DC’s New 52 that has TWO whiz-bangs to end the book. The first is a very intriguing, unexpected, and controversial end to the team’s torture episode. The second is the cliff-hanger that has the team thrown out of a plane on their way to probably the Squad’s biggest assignment literally and figuratively ever of any incarnation pre-Flashpoint. Wow. Well done!

A lot has been written by the online fan press about the prominence Harley Quinn has gotten on the cover of this debut issue and the expectation this book would be more “fun” or zany. I can understand fans of Harley who may be disappointed that this book is darker than they expected, but regardless of the cover hooks, the book IS the SUICIDE SQUAD not Harley Quinn & friends. There is gallows humor in this book, but executed sparingly.

A lot has also been made about the costume, if we can call it that, that Harley Quinn now wears. Consider it an unfortunate by-product of the massive success of the Arkham Asylum video game. The Squad’s Quinn is certainly not as trashy as the game’s version, but she is close.

And, a lot has been written… [Interlude: for a book that isn’t called Batman or Green Lantern there’s a lot of strong emotions being spilled on the internet about this book. DC must be doing something right. End Interlude] …about Amanda Waller and her slimmed down frame. In the pre-Flashpoint DCU Amanda Waller was a strong, obese black woman who could make the hard the choices and sacrifices, of herself and her team, that others including her medals-clad male counterparts couldn’t or wouldn’t. She was cold, calculating and always effective. She appears to be the same person in the New 52 except only 170 pounds lighter and maybe 10 years younger. This is an Amanda Waller at the beginning of her career. And, she seems dangerous.

So, Quinn mirrors the video game while Waller mirrors the slimmer Green Lantern movie version of the character. Plus there is a Suicide Squad video game in the works. Cross-platform synergies in the new DCU!

I would acknowledge that while this take on the team is darker than earlier versions, it does seem more contemporary and feels real. Writer Adam Glass channels his experience as producer on the sets of TV shows such as Cold Case, the Cleaner and to a lesser extent Supernatural. This interpretation of the Suicide Squad is true to the tone of the original, but in the 21rst century, and feels like something I might be watching on HBO.

I’m excited about next month as that whiz bang cliff-hanger of the team’s next mission is a definite hook. I also imagine that there is more to that assignment than meets the eye. Issue #1 was full of genre-bending surprises, why would issue #2 be any different. Do yourself a favour and pick this book up. 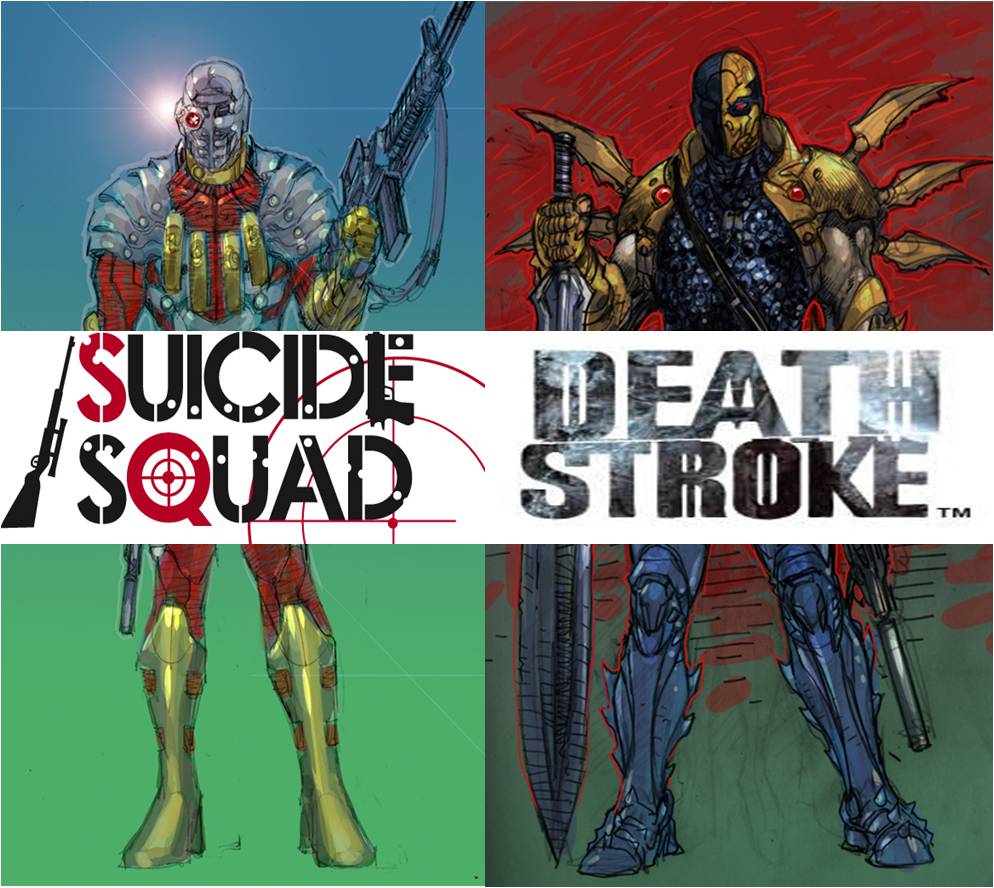