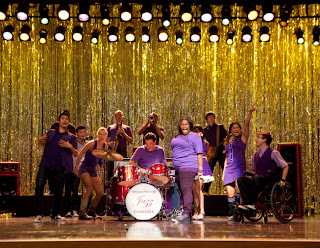 Glee returned for a third season last night, and while it may have been absent from our television screens this summer it was rarely absent from the various entertainment websites I frequent. Yes, it was a bit of a dramatic summer for Ryan Murphy and his cast, as he announced that certain characters were leaving, no they were getting a spin-off, no they hurt his feelings so now they’re not getting a spin-off, no maybe they’ll graduate but still be on the show, no I never said anything stop quoting me. Ryan Murphy also caused me to rant a little whenhe announced that Chord Overstreet wouldn’t be returning as Sam (save for the odd guest appearance) and it was later revealed that Lauren Zizes will only be a minor character this year. That part I was OK with, since I never really bought Lauren as wanting to be a part of New Directions, but I was mad that they robbed us of the chance to see Mercedes and Sam date.

So not only did Ryan Murphy have a busy summer, but the students and staff from McKinley High did, too. And Jacob Ben Israel was there to catch us up.

Rachel, Finn, Kurt and Mike are all seniors this year. I feel like Quinn should be too, but they didn’t mention that. We’ll talk about her later. Mike’s waiting for his parents to decide which Ivy League college he’ll attend, Finn just wants to have a great senior year, and Rachel and Kurt have their sights set on a competitive New York drama school.

Over the summer Mercedes dated Sam, but his dad got a job out of state and his family had to move. Now she has a new boyfriend (Tinker from Friday Night Lights!) so I’m looking forward to seeing a new side of Mercedes this year. Also kaput are Puck and Zizes, since she decided the glee club was tarnishing her cool reputation too much. Lame. New Directions also lost a third member over the summer – Quinn. She was MIA all summer and returned to school with pink hair, a terrible wardrobe, a smoking habit and an unfortunate disdain for soap. I hope Quinn recovers from this identity crisis soon, because I can’t bear to look at those clothes all year long. I also hope her tramp stamp tattoo of Ryan Seacrest is not real. 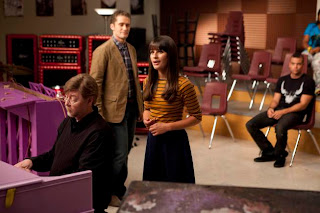 With three members gone, Schue encouraged the kids to recruit new members by staging impromptu performances with donated purple pianos (and magical full jazz bands) he’d placed around the school. Oh, Schue. Glad to see you haven’t changed. The glee club’s first performance, a rousing version of “We Got The Beat” in the cafeteria, sparked a food fight.

Only one kid was inspired to audition – Sugar, a rich student whose dad had donated the pianos. I liked her as soon as she said “I have self-diagnosed Aspergers so I can pretty much say what I want.” Unfortunately, she couldn’t sing and also didn’t seem to have Mike’s dance skills to make her an asset. Schue had to tell her she wasn’t in, and it was the first time he’d done that. Harsh!

Speaking of Schue, he and Emma are sleeping together! They’re incredibly adorable, but apparently also very chaste. It bugged me that Will brought that up in front of Sue and Higgins, but I guess he’s frustrated. I hope they work it out, because I really can’t deal with another Will and Emma breakup.

Meanwhile, Emma was helping Kurt and Rachel determine their futures. No, not with that terrifying “Me and My Hag” pamphlet. With a college recommendation! They attended a meeting of other drama school hopefuls and were faced with a harsh dose of reality – the room was filled with kids who looked and acted exactly like them, and they were incredibly talented.

If you watched The Glee Project this summer (and I did, a little) then you recognized runner-up Lindsey Pierce, who scored a two-episode appearance. I think they did a great job of finding a role suitable for her, and it really showcased her talent. That performance was great. Unfortunately, the dress they put her in was horrific. She was way cuter on the reality show! It really did her no favors.

After witnessing the competition Rachel burst into tears in the car, but Kurt helped her pull it together. After all, there may be people more experienced and talented than them, but they’re fierce! And that’s what counts, just as Tyra Banks.

Speaking of competition, the world’s cutest couple was worried about how the pressure of belonging to competing glee clubs would hurt their relationship. So Blaine transferred to McKinley! We all knew this would happen, but I was excited nonetheless. Especially because it means we get to see Blaine in awesome hipster clothes, like what he wore for his debut performance. Loved it! I’m excited to see how having Blaine around will change the dynamic of New Directions.

The glee club managed to gain a member in the first episode, but they also lost one. After Santana followed through on Sue’s orders and set fire to a purple piano, Schue kicked her out of the club. I think this was the weakest storyline in the premiere, because we’ve already seen Santana and the other Cheerios have to choose between cheerleading and singing. It gets old.

And doesn’t Sue have bigger fish to fry than having her cheerleading co-captains (Santana and Becky) commit vandalism? She’s running for office, after all! On a platform to cut all arts programs in Ohio until reading levels are up to snuff. (Because cheerleaders and football players are so smart?) I’m still on the fence about this storyline. It could be good for some laughs, or it could go way off the rails. I’m reserving judgment until I see more.

Overall though, I thought the first episode back was a good start to what will hopefully be a more focused and consistent season. I enjoyed all the musical performances – you can never go wrong with a Kurt and Rachel duet or with a song from Hairspray – and I like a lot of what’s being set up for story arcs. What did you guys think? Tell me in the comments below, and check out my other favorite quotes and moments from the episode: