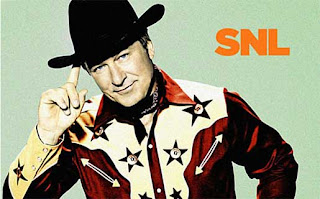 So tonight’s first episode of the season was hosted by veteran host Alec Baldwin. Way to start the show off strong. This is Alec’s 16th time hosting the show which means he officially past Steve Martin in most time hosting. To me, Alec is the king of deadpan deliver and I am a big fan of him and 30 Rock. Last season wasn’t the greatest but I haven’t written the show off yet. Not like The Office. Oh burn.

So what will Alec do on the show? He doesn’t have a recurring character but I always enjoy when the very Liberal Baldwin places a very conservative character.

Open Sketch – Republican Debates
Yup I was right, Alec is playing Rick Perry in the sketch. Even though the impressions of the republican candidates are just impressions, it still scares me to think one of these people could be president.

Monologue
Speaking of Steve Martin, here he shows up to prove Alec is not use performance enhancing drugs. And he brings a drug expert, Seth Rogan (useless cameo), to prove it. Then Steve drinks the urine sample and I wish that Alec could just host the damn show. I am not a big fan of Steve Martin, I get he is a comedy legend, but it’s just not working Steve.

Everything in this commercial considered a ‘red flag’ was so true. My favourite were, “her last boyfriend was a club promoter,” and “her pinky nail is longer than the rest.” I think there are a lot of guys who could benefit from a perfume that can help them weed out the crazy girls. There should be cologne for douche bag guys to warn girls. Oh yeah, it’s called Axe Body spray.

All My Children Wrap Up Party *Must Watch*
As All My Children concludes it’s 41 years, they have a wrap-up party where former crew members come back with dramatic/hilarious updates. All the soap opera clichés are here, twin brothers, fake deaths, comas, medical conditions, amnesia. I loved, “Or was I pushed?” I now officially think Paul Brittan is adorable. However I am coming to this conclusion while he it wearing coke bottle glasses, a red wig and using a ridiculous German accent. What does that say of me?

Eye on Buffalo – Camera Delay
I always find the time delay in reporting is funny but this sketch went on too long.

Weekend Update
Seth is back and looking dapper as ever. Here are the highlights of Update.

Tony Bennet aka Alec comes in singing songs about how great life is. I have seen Alec do this impression of Tony before and he always portrays him as a very positive slightly racist man. This time Tony shows up shilling poise pads. Gross.

Here are also some of the best jokes:
On trying enlist gay people by visiting gay community centres: “Gay community centres? Oh, gyms. You mean gyms.”
On Facebook’s new timeline application: “Come at me faster other people’s sonograms.”
On Ted Haggart signing up for an episode for Wife Swap: “He signed up for the show before he found out he had to swap his wife with another wife.”

Who’s on top?
A game show trying to correctly guess if two celebrities were to… or let’s say…. have a special snuggle, who would be on top? This was funny but so over the top. When they bring up Timon and Pumba my childhood is crushed a little. But it’s true they would take turns because, it is the circle of life. My favourite part was listing the order of the cast of Entourage.

Top Gun DVD – Lost Auditions *Must Watch*
HA HA! I was dying during this. So many impressions and all so good. My favourite was Bobbi’s impression of Natalie from the Facts of Life. Also I loved Bill Hader’s Harvey Firestein who is constantly questioning how this moive isn’t gay. “This last line of the movie is, ‘You can ride my tail anytime,’ guys?!”

Just Ignore Her
Who here remembers fake crying or whimpering to get their parents attention? I did plenty of times and they also ignored me every time. I liked this sketch because it reminds me how stubborn both kids and parents can be. But poor Vanessa Bayer got a whole pot of tapioca on her head.

Dying Wish *A moderate must watch*
I was going to give this a bad review until Bobby Monyahan’s soldier says, “Please tell your mother she’s so fat she doesn’t have a lazy eye she has a rib eye.” Those jokes never get old.

So Alec was a solid host as usual. I was surprised that so many sketches didn’t touch on many events that happened in the summer. Come on, there was so much that happened.
On another note I was happy to see that the cast has not changed and the newbies got a second chance. A lot of the cast members, like Kristen and Jason, have had a lot of success with movies lately and could probably leave the show but I think they should give it one more season.