This week Mike Noyes continues his look at filmmakers who operated outside the mainstream.

This week I will discuss the Las Vegas auteur Neil Breen (who looks, but doesn’t sound, like a young Garry Shandling), writer, producer, director and star of Double Down (2005). 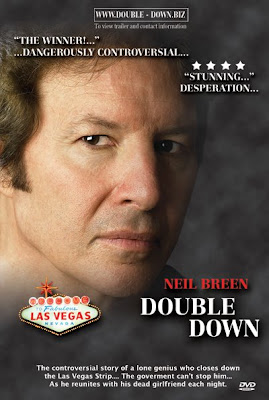 Sadly, I’ve been able to find very little information on Mr. Breen, this goes to show how “outside” he is. According to boingboing.net Breen was a Las Vegas real estate agent who decided to make movies instead. A classic Outsider Filmmaker move!

On to the movie! Double Down follows the adventures of Covert Agent Aaron Brand, the self-proclaimed most badass covert agent on the planet. He “lives between this world and the other” and is “a mercenary for any nation who wants to control another.” He started out as an agent for the Secret Strategic Support Branch of the Defense Intelligence Agency and became the best agent they ever had. He developed a way to control any computer or satellite the government had with his laptop. But his technological prowess scared the government so that killed his fiancé. So he became a mercenary since he controlled access to the National Geospatial Intelligence Agency. He controls access to “anything and everything.” He’s even received Bio-electro Medical Implants to assist him in his attacks.

In fact, he’s so badass, one time the CIA tried to follow him by plane, but he took control of the plane and crashed it. So now orders are not to follow or track him anymore. But I don’t see how he could be hard to track down, as he always seems to be sitting out in the desert next to his car just outside Vegas with his laptops and cell phones. However, he does have a force shield that he invented that makes him and his car invisible to the naked eye and anyone who gets to close to the shield will die instantly. I could list his entire resume of badassness, but I don’t want to make this article that long. You’ll just have to watch the film to get the rest of it.

His current mission: His orders from “another country” are to shut down The Strip in Las Vegas for two months. He never explains why, but I guess those kinds of things just aren’t important.

But before he can get on with his mission, he needs to tells us all about his dead fiancé and has flashbacks to when they were little kids, they met when they were seven. Along with these flashbacks Aaron also constantly sees dead people like his fiancé and parents as well as himself as a kid. In fact its 23 minutes into the film before he even steps foot in Vegas, not that he stays there very long. It’s nearly 30 minutes in before the first actually lines of dialogue are spoken that aren’t just Aaron’s voice over. I’d say easily over half the film is voice over. There is actually very little dialogue from the few other characters that appear.

Beyond fighting the system, Aaron is also fighting deep depression from the death of his fiancé. At one point he meets some stranger in the desert who slips and cracks his head open on a rock and dies. Then while having dinner with some… friends?… he learns their daughter has just been diagnosed with brain cancer. I guess all of this is too overwhelming for him because he spends a bulk of the film in the desert being upset about all this stuff, he also shouts to the sky and runs through the desert yelling. But all this also makes him begin to question where he really wants to go through with this mission.

This film does for running around the desert what Birdemic does for driving and parking. Okay, so I’ve talked tons about what this movie is about, which really isn’t much of anything. So how well is it made?

The acting is pretty terrible. Brand isn’t the worst I’ve seen, but he won’t be winning any awards any time soon. What sells his acting is you can tell how much he cares about this character and this film. What he lacks in talent he makes up for in passion. However, everyone else in the film is pretty terrible, but like I said earlier, that have very little dialogue. I’m not sure if he did actually casting for the film or if he just got a bunch of friends to be in his film.

And this is HIS film. Along with the major credits listed above the end credits sight him as being musical director, editor, production designer, production manager, casting, locations and catering. I also love that for the categories of Lighting and Make-Up and Hair they simply say “None.”

Breen gives Ed Wood a run for his money for stock footage use. Seriously, I can’t remember the last time I saw this much stock footage in a film that wasn’t a B horror or sci fi film from the 50’s.

As for the footage shot by Breen, it’s done pretty poorly. There is at least one moment that I spotted the camera and tripod reflected in a scene. Also, in a rare moment when two characters are actually talking and Breen has to cut from one to the other, the shots are so poorly framed that it looks like both characters are starring off into space instead of actually talking to one another.

On top of that, many of the dialogue exchanges are shot at slightly low angles so that the only background behind the actors is the blue sky allowing no kind of setting to be established. Especially when stock footage is used to set the location. I have a theory about this film. Throughout the film Aaron sees his dead wife and parents and has other visions. So he’s obviously crazy. Also, he keeps talking about these diversionary attacks around the world that he is setting off, but we never actually see any of them. All we see is him sitting in the desert typing on his computers that appear to be turned off.

So my theory is this. Aaron Brand is crazy. He’s not really a covert agent. He’s some depressed dude who never recovered from the love of his life dying. So if he really is just crazy and not an agent and the whole film is really just in his head, then the film is kind of amazing. It’s still poorly made and hard to sit through, but if that layer is added it at least makes it something to think about. However, if it really is just as it’s spelled out with no underlying ideas, then man is this one seriously bad film.

Double Down is a classic outsider film. You can tell that Neil Breen made this film pretty much by himself and while he spent very little on it he certainly put his whole heart into it. The story doesn’t make much sense at times, but if you are a lover of low budget cinema than you’re sure to find something to enjoy in this film.

I’m looking forward to seeing his second film I Am Here Now which looks like some kind of crazy sci-fi film where Breen plays an alien. Production value looks a little higher and it appears to be chalk full of social and political commentary.

You can watch the trailer for it here.

He is also currently in production on his third film.

Tags: From The Inside