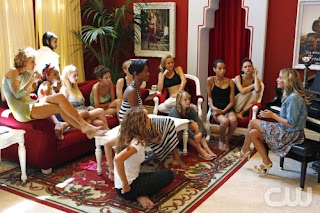 Ding-dong! Guess what, ANTM fans? Kristin Cavallari has stopped by to share some of her wisdom. How helpful. Let’s review the lessons the models received:

Oh, speaking of hateful people, the girls are all going to be interviewed by Mario Lopez! Gee, I hope none of them express any less than pleasant opinions about D-List reality stars. Quick, say you really like Brad Womack’s tattoos!

The girls were split up into two teams, and the winning team would be safe from elimination that week. First, Lisa was an obvious weak link. Man, that girl is obnoxious. The second team came across as much more professional. Allison came across the best, I thought – she seems actually intelligent and creative, like someone in the fashion industry should be. Team 2 won, which was no surprise. And then, my girl Allison was singled out as the best, scoring her own individual interview on Extra. Yay! She’s definitely my favorite.

After the challenge, there was an uncomfortable situation on the bus as Angelea angrily expressed her feelings about the critique I got. It was kind of hard to follow, to be honest. She’d been very professional during the interview and was told to have more personality. It seemed like Angelea automatically equated that with being a “hood rat” (I’m guessing because that was her persona on her previous cycle) and she talked about working in a bank and knowing how to conduct herself. Was she mad because she thought people wanted her to act like a hood rat? Or was she saying that’s what she would give if the producers wanted the “real” her? I was so confused.

Shave your legs tonight, whatever it is!

The clue for the photo shoot was “What long legs you have”, which the girls assumed meant either spiders or giraffes. Yeah, they’re definitely models. It actually meant a photo shoot with stilts. The girls were paired up, with one from the winning challenge team and one from the losing team.

Some of the girls definitely struggled during the shoot. Bianca immediately freaked out because she has a fear of heights (among many other things). Dominique could only give one face. Camille was probably the worst of all, since she was worried that her transgendered partner Isis would overshadow her, a “real” woman, in the photo. Seriously, she said that. It was disgusting. Alexandria made sure to draw attention to every move she made by yelling out in pain. She’s like a toddler intentionally falling off her chair during dinner and then crying for attention. jumping off the top step and then Yes, dear, we all see you. Lovely. Now eat your peas.

Can we first talk about Andre Leon Talley’s chapeau this week? Divine, yes? And Tyra looked OK too.

Alexandria and Shannon: OK, this was a hot picture. I hate to say it because I don’t care for either girl, but they looked good.

Allison and Angelea: Oh, Angelea. She addressed Nigel before they showed the photo, but it was so far removed from the outburst she had in the bus. This girl still confuses me. On another note, I loved Allison’s dress at panel. Anyway, the photo was good. Allison looked better than Angelea, but considering their performances during the shoot she was lucky Allison didn’t outshine her more.

Dominique and Kayla: Dominique carried this one, that’s for sure. It was just an OK photo.
Isis and Camille: This was the worst photo, I thought. Neither girl looked like a model, and Isis looked downright bland – and if there’s anything Isis isn’t, it’s bland.
Laura and Bre: This shot, however, was fantastic. I loved their poses more than anyone else’s.
Lisa and Bianca: Despite Bianca’s fear, she managed to get a good shot – it actually looked like the girls had worked well together.

Good photos, weren’t they? The stilts were so cool that almost everyone delivered a good photo. Alexandria, Angelea, Dominique, Isis, Laura and Lisa were up for elimination, and of all the girls I thought Isis delivered the weakest shot. I didn’t want to see Isis go, but I didn’t know who would deserve to be eliminated instead of her.

First, Tyra called the safe girls, giving best photo to Allison. (I hope she’s not peaking too soon!) Next she called Bianca, Shannon, Bre, Kayla and Camille. (She was obviously the weakest of the safe group.) Next, Tyra called Alexandria, giving her best photo from the unsafe group. Next were Lisa, Laura (I thought she was the best from this group) and Dominique.

So that left Angelea and Isis, and rightly so – they had the two weakest photos from their group. I really thought Angelea delivered a better photo than Isis, and that’s what it came down to – Isis was sent packing. Did you guys watch the episode? Do you think Tyra and the rest of the panel made the right decision? Let me know!