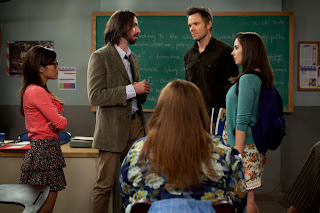 In “Geography of Global Conflict”, Annie was faced with a nemesis and they competed to have the best Model United Nations at Greendale. The episode guest starred Martin Starr, who I love, as Professor Cligoris (made sure I typed that one right…) who taught both Annie and her Asian doppelganger in Poli Sci. This girl was named Annie Kim, dressed like Annie with the addition of huge hipster glasses, and was also a manic perfectionist. After Annie mentioned starting a Model UN, Other Annie beat her to the punch – so they made it a tournament.

It was freakin’ hilarious, too. Troy represented the European country of Georgia with a Southern accent, Shirley kept offering up all of China’s money, Abed was fixated on the other Model UN occurring on “Earth 2”, and Pierce kept referring to Jeff, who was representing Uruguay, as “you’re a gay”. In the home stretch the gang was distracted by a horrifying stench, and Annie threw the most epic adult temper tantrum of all time.

The episode also highlighted the somewhat creepy nature of Jeff and Annie’s relationship, from Other Annie asking “I’m sorry, I don’t understand the nature of your relationship – is he your father or your lover?” and then Jeff scolding Annie after her tantrum with “You’re acting like a school girl and not in a hot way!”Jeff admitted that he plays up the whole “kiddo” act to cover up his actual feelings for her, but it can’t work now that she’s becoming a mature, confident woman. Does this mean Jeff and Annie will actually date this year? Part of me is really excited for that, and part of me is worried it would kill the group dynamic.

Meanwhile, I thought Britta and Chang’s subplot was silly, but entertaining. Britta took up protesting the Model UN at Greendale after she felt jealous that an old protesting friend of hers was in jail while she was choosing a major and a life path. It happened to coincide perfectly with Chang’s new gig as security guard, which turned out to be less exciting than he’d anticipated. And it was all done to Lionel Richie’s “Hello” – don’t ask me why, but it was funny.

Overall, I thought this was a really strong episode of Community. It was fun to see Annie return to the crazed, ultra-competitive, desperate to please Little Miss Perfect she was introduced to us as in season one, because there will always be some of that in her. But it was also good to see that as a character, Annie has somewhat matured past that and gotten it under control. I also thought all the other characters were pitch-perfect in their supporting roles in this episode, especially Pierce. His inappropriate comments were some of the highlights of the episode. Speaking of which…