Wow! After a somewhat lackluster premiere, The Amazing Race returned last night with an episode that turned things upside-down, shuffled the leader board and kept me on the edge of my seat.

A few factors played into the surprising results, which saw last week’s last-place team Bill and Cathi surge ahead to the middle of the pack while two seemingly strong, in-it-to-win-it type teams were eliminated. There was an equalizing flight, Bill and Cathi rocked their Speed Bump, and a tricky little sign caused most of the teams to have to double back on the Detour.

The teams were all instructed to find a flight to Jakarta, Indonesia, which put everyone on a level playing ground. This was a tough pill to swallow for teams who had a lead on the previous leg, since they also learned they were facing a double elimination at the end of the leg. However, this was good news for Bill and Cathi, who’d previously had little going for them other than a great attitude. Seriously, so positive – Cathi told Bill “Great job ripping” when he opened the first clue. They’re downright saintly compared to siblings Justin and Jennifer, who managed to fight over the leg’s easiest task – waiting in the airport. “Do you want to make that phone call or do you want to wait on that train?” Jennifer asked, and Justin responded “I want to be a better team than we are right now.” …Not one of the options. How about you just sit and make small talk like all the other teams?

Once at their destination in Indonesia, the Road Block required one team member to repel down into a cave, go spelunking, retrieve a couple artifacts, and climb back up using a giant ladder. It looked awesome, I’d totally do it. None of the teams were crippled by fear – in fact, most marveled about how gorgeous and cool it was. And luckily for Bill and Cathi, they arrived first at the Road Block so by the time they’d completed their Speed Bump (unraveling a long cord) they hadn’t fallen very far behind at all. In fact, thanks to Bill’s killer upper body strength (that’s what happens when you live on a farm!) he raced up the ladder at lightning speed.

If I had to guess, I’d say the parking challenge seemed easier to complete. But no one seemed to face any real struggles with either challenge – those came at the orphanage.

The teams knew they were to donate their earnings from the Detour to the orphanage, but once they arrived there was also a sign instructing them to hand over ALL their cash. Very few teams noticed this sign.

Ernie and Cindy, who’d finished first in the first leg, also arrived first at the orphanage – but they missed the sign and that mistake cost them a second consecutive first place finish. Bill and Cathi and Team Twin arrived next and also headed off to the pit stop without fully completing the task. 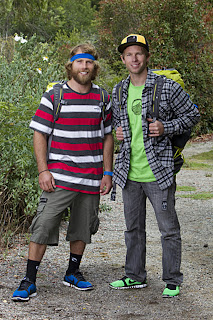 Believe it or not, the first team to spot the sign and correctly complete the Detour were the stoner-type snowboarders, Andy and Tommy. Only two other teams also saw the sign and handed over all their money – sailing father and son Laurence and Zac, and showgirls Kaylani and Lisa. Really, not at all what I would have predicted. The three teams were rewarded for their attention to detail – as everyone else was told to double back, they were checked in first, second and third.

Cindy did not take the news that they’d made a mistake well at all. Not at all. Sorry girl, but with high-strung emotions like that, you have no business being on the race. You can’t run fast if you’re too busy sobbing hysterically over having made a mistake. Not good. Still, they managed to keep their lead over the other screw-up teams and land in fourth place.

One by one, the teams returned to the orphanage, handed over their moolah, and hurried back to the pit stop. It was really a shame for Bill and Cathi, because they lost some ground to other teams in the process. Twins Liz and Marie overtook them for the fifth place spot, followed by Jeremy and Sandy in sixth and then Bill and Cathi in seventh. The extra stress of having to double back sparked more bickering between Justin and Jennifer, but they still managed to come in eighth. 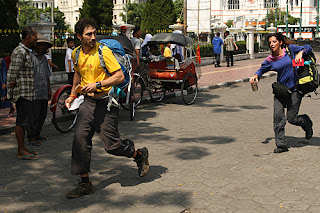 That left three likable (or at least partially likable – I’m looking at you, Jenna) teams battling it out for the one final safe spot. Amani and Marcus were lagging behind, as were Ron and Bill. And since Jenna had forgotten (accidentally, Ethan!) a clue back at the Roadblock challenge, they’d fallen behind as well. I wasn’t happy to see any of these teams go home, especially with bickerers like Justin and Jennifer still in play. Amani and Marcus seem fun and focused, though, so I was happy to see them stride up to Phil in time to grab that ninth place position. 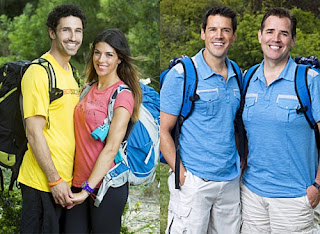 You had to feel bad for the two eliminated teams, though. It was very shocking to see a strong team like Ethan and Jenna, who’d placed fourth in the first leg, go home to early. And on a charity task! That’s Ethan’s whole life! Ron and Bill hadn’t shown themselves to be as strong contenders, placing eighth last week, but they seemed nice and very supportive of each other, so it was still a shame to see them go.
I’m glad the show is starting to pick up, and this episode really proved that there are no obvious frontrunners yet – but I’ve got my eye on the snowboarders and the father and son sailing duo. What did you think of the episode? Were you surprised to see two million dollar winning Survivors go so soon?