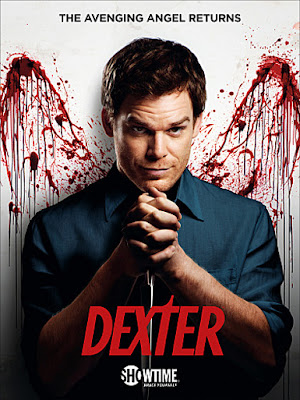 Even though the last season of Dexter was not my favorite (I think the show likely peaked with Trinity), it’s still a show that I pretty much love no matter what. I’d re-watch season five of Dexter over the first season of Boardwalk Empire (I’ll have a post on the first couple episodes of season two for that soon) or pretty much any other show in a heartbeat. But I think we can almost all agree that the season was not a highlight of the series.

The season six premiere, however, seems very promising. From an exhilarating opening, to Dexter’s own character development, internal struggles and concerns for his son, to the office politics, to a REALLY gross murder, it had everything I want in an episode of my favorite serial killer show.

So, what went on since we last saw Dexter at his son’s first birthday party? Well, Harrison is a bit older, about to enter preschool, and still very very cute. Dexter’s been handling his “dark passenger” rather well, with the help of Batista’s hot sister as a nanny. Deb and Quinn have gotten veeeery serious. And, both LaGuerta and Batista (now divorced) have gotten promotions – LaGuerta’s under less than ethically pristine circumstances, of course. Now, as for the storylines introduced in this episode? I really dug them.

Most Likely To Be A Prolific Serial Killer?

Dexter has a knack for being able to inject humor into what is otherwise a very dark show, and I found the high school reunion storyline very amusing. (“I have no idea what ‘Hammer time’ is…or how it differs from regular time,” and the dance that followed, were highlights.) Dexter was there to track down an old classmate who’d killed his wife – a girl who’d been one of the few people to be nice to Dexter in high school – but upon arriving at the reunion he realized he’d suddenly become popular. Of course – as Harry pointed out, it was the perfect storm of likability. He’s good looking now, has a flashy job, and got major pity points for recently going through a very publicized personal tragedy. Everyone wanted a piece of Dexter Morgan, and it was fun to see him try to enjoy it rather than completely retreat in discomfort. He managed to still make his kill and score some private time with a hot blond.

Most Likely To Become A Priest?

Meanwhile, Dexter took Harrison for a pre-school interview at a private Catholic school Batista had recommended. Deb was surprised when Dexter said he didn’t believe in anything, but neither of them were raised with much religion. That got Dexter thinking about what he wants for Harrison, and he decided to go ahead with the Catholic school, scary crucifixes and all. I’m really interested to see where this will go, and how Harrison’s education might tie into the other religious storylines that have been and will be introduced this season.

Most Likely To Make Me Throw Up 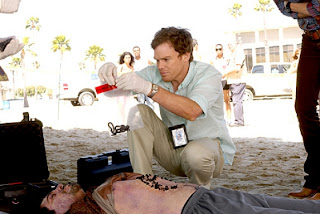 Speaking of religious, how creepy was Colin Hanks as a religious fanatic murderer with an even creepier father? The only thing weirder was their kill, which involved cutting a man open with a rusty knife, removing his intestines, and sewing him back up…with SNAKES inside. Ew! It was so, so gross. I both hated and loved it.

These two guys clearly have some disgusting, disturbed plans, so I’m very excited to see how that arc will play out.

Most or Least Likely To Live Happily Ever After?

Quinn was about to propose to Deb! I knew it. Of course, things did not go smoothly – this is, after all, Deborah Morgan. Girl can never catch a break. Just as Quinn was rehearsing his dull simple proposal in the men’s room, a Kevlar-wearing gunman came in and shot up the restaurant. Deb tried to take him out by herself, but Quinn emerged from the restroom just in time to give her a much-needed hand. The episode left us hanging, but I can’t wait to see what happens.

I found the episode immensely entertaining – it flew by so fast, I was shocked when it was over. That’s good TV. What about you guys? Are you still watching Dexter? Do you have high hopes for this season? I don’t know if it will ever be as good as season four, but I felt like this episode really returned to the show’s dark but somewhat comedic roots.