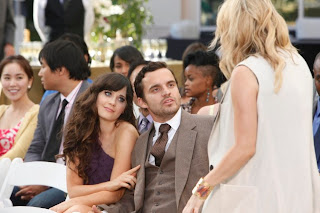 OK, I officially feel like this show is coming into its own.

The first two episodes of New Girl really dealt with Jess’s transition out of a relationship and into her new living arrangements, and rightly so. The show had to establish characters, and that’s not easy when one of them has to be swapped out after the pilot thanks to Happy Endings. But this third episode felt like a fun sitcom episode, not an early-stages setting-the-tone type episode.

Most of the episode took place at a wedding of the guys’ friends, with Jess attending as Nick’s date. Her entire purpose was to look as hot as possible and “suppress the Jess” as much as possible so that she could make Nick’s ex jealous and keep him out of trouble. We’d already established that Nick took the breakup hard, and clearly he hadn’t moved on from that relationship yet.

Of course, it was hard to reign in Jess at the wedding. She started out strong, being all touchy-feely with Nick in front of his ex, but got a little out of control when she threatened Schmidt’s crush with a knife…although if Schmidt hadn’t painted Jess as a crazy person, the poor girl wouldn’t have been so freaked out.

There were a lot of Jess Quirks that worked in this episode, like her DIY Spanx (girls bike shorts) and her personalized chicken dance (pecking instead of clapping, because it’s more realistic). Only a couple things fell flat for me – the hillbilly teeth were pretty dumb.

I also felt like this episode helped establish Winston as a likable character. He was concerned about not having any exciting life updates for acquaintances at the wedding (been there, done that), got into a hilariously uncomfortable dance-off with a rival usher who was about 12 years old, and came to comfort Jess after Nick and Schmidt were jerks to her.

What I really liked about this episode was that Jess seemed more self-confident than she did post-breakup. She came to the wedding to help her roommate out, but when he was mean and unappreciative she decided to just go have fun. She was the one giving the pep talk, she wasn’t the one crying in the photo booth. I’ve felt from the beginning like Nick and Jess are being set up for a will-they-or-won’t-they romance, and now that he’s officially moved on from his ex it seems inevitable. If the show goes there, hopefully they find a way to do it in a charming way (I’m too young for Sam and Diane, but might I throw out Lorelai and Luke The Early Years as an example?) rather than a tired, predictable way.

New Girl has already been picked up for a full season, so the show will have plenty of time to really find the right groove and fine tune that line between Jess being funny and Jess being over the top annoying. Will you watch?