Funniest episode of Community so far this season? I know that’s not saying a whole lot since there have only been three episodes, but I really enjoyed “Competitive Ecology”. It was funny, kind of poignant, and just the right amount of wacky.

I loved how the episode really highlighted the fact that the study group really only ever hangs out with each other. There are a lot of reasons for this – Annie probably didn’t have any friends in high school and Troy left all his behind when he decided to give up football and attend a community college. Shirley is a single mom and probably didn’t have time for friends. Britta is a drifter (her only friends are in prison for protesting) and, let’s face it, rather unlikable. Jeff’s superficial friends didn’t care about him once he wasn’t a fancy lawyer anymore. Abed is a computer. And Pierce is Pierce.

So no one really has any friends outside Greendale, and since this is a show about the community college we’d never see them even if they did. And within Greendale, they’ve created this airtight, occasionally toxic and occasionally heartwarming clique. They don’t like outsiders, which is why they freaked out when they were assigned strangers for lab partners in Omar Little’s class. They went to the prof and convinced him to let them buddy up – but since there was an odd number, Pierce was stuck with a stranger named Todd. The horror!

Everyone immediately paired up the way you’d expect – Jeff with Annie, Abed with Troy, Britta with Shirley and Pierce as the odd one out – but the partnerships weren’t as harmonious as they’d expected. Annie was annoyed at having to carry Jeff, who was too interested in his phone to pay attention to her. Britta quickly tired after seeing photo after photo of Shirley’s new baby. Troy and Abed realized that now that they’re roommates they spend way too much time together. And worst of all, Pierce was stuck with that incredibly pleasant guy named Todd!

Most of the episode took place in the study room, where the gang became embroiled in a huge fight about who should be with who, who was most popular, and who should be saddled with Todd (no offense). And poor Todd was stuck there for it all, along with his turtle. This was a bold episode, because pretty much every main character came across as a total jerk, but it was so funny that I didn’t care. Everyone was at their worst, but since we’ve come to care so much about these characters I didn’t end up liking them any less at the end of it all. 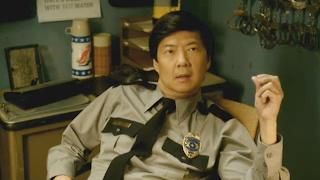 The only downside of this episode for me was the B-story, which is mostly because I’ve just never been a big Chang fan. It was funny enough, but I loved the main storyline so much that every time we cut to Chang and his grandiose fantasies about his security guard gig, I sighed impatiently waiting for the study group to reappear.

The end result that the “mean clique”, as they’d be called in prison, must work together all year and accept a grade that’s the average of all seven marks, was a great way to cap things off. And in the end, the gang went back to normal – ignoring their internal issues and projecting their problems onto the outside, foreign world. I mean, who didn’t hate Todd, am I right?

What did you guys think of the episode? Got any favorite quotes? Here are a few of mine: