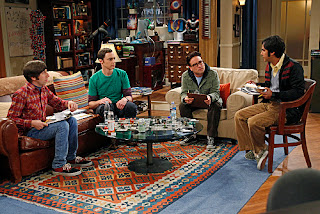 Um, shouldn’t Raj have learned sign language long ago? It seems like dating a deaf woman is an obvious solution for his problem, but relying on someone as careless as Howard to interpret was definitely not a wise move.

After realizing that Raj was feeling more and more like a third wheel as Howard and Bernadette start planning for their wedding, Penny decided it would be a good idea to set him up with a girl – and she had the perfect fit, a deaf girl from her spin class. Awesome, right? Well, it was at first until everyone figured out that not only is Raj’s family much richer than they realized, but his new gal pal Emily was just using him for his wealth. Bummer.

Penny tried to intervene but to no avail, and Raj wouldn’t listen to common sense. The poor guy was too in love – he sure falls quick and hard, doesn’t he? It wasn’t until his parents threatened to cut him off if he didn’t dump the girl and he chose “love” over money that she bailed. Poor Raj.

Meanwhile, Sheldon’s decision to make all trivial decisions using Dungeons & Dragons dice turned out to be, well, a terrible decision. Probably because things like whether to use the washroom are not so trivial after all. It wasn’t a great storyline, but Sheldon’s bizarre idiosyncrasies never fail entirely to bring laughs.

Overall I thought it was a decent episode – it won’t go down in the books as an all-time favorite, but it was nice to see Raj take full advantage of his screen time. What did you guys think? And of course, here are some of my favorite quotes from “The Wiggly Finger Catalyst”: