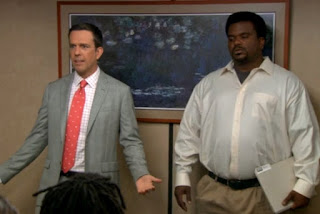 Darryl’s long been one of my favorite characters on The Office, so I really enjoyed seeing him front and center on last night’s episode, “Lotto”. The Office has had a lot to prove this season, and while I don’t think the first few episodes have been anywhere near the level the show was at its best, they’re not the worst the show has ever seen either. I can stick with this show as long as it remains, you know, good enough.

So what happened to Darryl? Well, when he got his fancy new gig up in the office, he stopped playing the lotto pool with his friends down in the warehouse. And they won. Playing his birthday. And they all quit.

It was such a good plot device because of course this would send Darryl into a depressed, sulky tailspin. Who wouldn’t feel like crap after that? He lost all will to do his job, which included hiring a completely new warehouse staff. Eventually, Andy found some leadership skills buried deep inside and dropped a truth bomb on Darryl – yeah, at one point he was being considered for the manager gig, but he dropped the ball. He didn’t take management classes, he stopped trying, and they passed him over for a promotion. He had no one to blame but himself for his current position in life. I’m interested to see if Darryl will realize he can’t become complacent if he wants to advance his career and how that will change his behavior.

Meanwhile Erin, Kevin, Jim and Dwight were spending the day down in the warehouse trying to keep the shipments going. This wasn’t the greatest B-plot ever, but I liked seeing how no one could really figure out how to efficiently do the job, whether they were stupid (Kevin), ditzy (Erin), ambitious (Dwight) or usually logical (Jim). And on top of all of that, we got fun glimpses into what everyone else would do if they’d been the ones to win the lotto – I loved the differences between Jim and Pam’s fantasies the most.

Overall, I thought it was another decent episode. The Office is not my favorite comedy on TV anymore, but seeing shows like 2 Broke Girls and Whitney get full season pickups reminds me that it’s still one I want to watch. Now, check out a few of my favorite quotes from the episode: