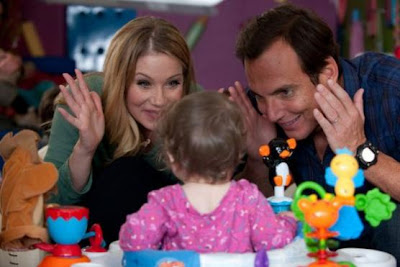 I think Up All Night is finally figuring out what to do with Ava.

I’ve been a big fan of this new comedy from the start, but have also acknowledged that Maya Rudolph’s character can at times come off as an SNL caricature that doesn’t fit in with the rest of the show – or even at best, a funny lady who doesn’t fit in with the rest of the show. The point is, it’s been hard for the writers to figure out how to gel Reagan’s two worlds together – her work life with Ava, and her home life with Chris and the baby. This is a show about new parents, so Home Life Reagan has always gotten the stronger material.

In this week’s episode, “Mr. Bob’s Toddler Kaleidoscope”, Ava is toned down but still funny, and fits into Reagan’s life in just the right way.

After dealing with a bitchy stay-at-home mom at Amy’s new baby class (By the way, can pop culture please stop reinforcing the idea that working moms and stay-at-home moms are mortal enemies? It’s not helping anyone. I’m looking at you, I Don’t Know How She Does It.) Reagan is trying super hard to balance everything – work, marriage, motherhood and friendship. It’s a tough juggling act. (Or so I assume – I don’t have kids. But I imagine it’s really similar to trying to juggle work, blogging and eating cheese at fancy wine bars. Right?)

I’m glad that Up All Night has shown us the depth of Ava and Reagan’s friendship because it saves the show from falling into a Selfish Boss cliche. Ava isn’t upset because Reagan’s not working as hard now as she did before the baby, she feels abandoned because they can’t hang out as much as they did before the baby. She’s bummed when Reagan bails after one drink on girl’s night because it was something they always did, every year. As the show continues and further establishes this friendship, we’ll start to see why Ava is having a hard time with all the changes in Reagan’s life. But there is one thing I think the show needs to do – we know that Ava needs Reagan now, but I’d like to see why Reagan needs Ava. Their bit with “Stefano” the bartender was a nice glimpse into their friendship, but I’d like to see more. So far the relationship has been a bit one-sided, and Reagan seems too cool and self-assured to be in that kind of friendship. I’d like to see just a little more give-and-take.

Chris and Reagan’s own storyline wasn’t the best we’ve seen from them, but it worked well enough. I loved how Chris took the baby class soooo seriously – this is obviously a guy who, while being a great stay-at-home dad, is used to getting out of the house a bit more and is putting extreme effort into whatever he comes across. Here’s what else I liked: