Did we know Jay made all his money by making closets? That’s what he does? Really? Frankly, I had no idea and I’m a little shocked. I expected something flashier, like…I don’t know, whatever it is flashy businessmen sell. Hedges? Hedge funds? Gold? I dunno. Moving on.

I’ve read several less-than-enthusiastic reviews of last night’s episode of Modern Family, but all I know is that I laughed out loud a bunch of times during “Hit and Run”. Maybe it was because it was the end of the night and I was more than a little sleepy, nearing that state where everything makes me laugh. But I’m standing by my analysis – it was a funny episode. 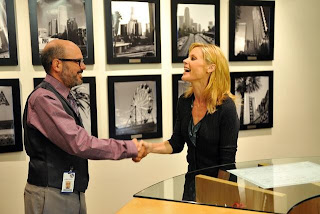 I like Claire having a nemesis. I think this is fun, especially because for some reason I’ve always found David Cross hilarious in an incredibly dislikable way. I loved to hate him on Arrested Development. So the idea of Claire running against this arrogant, smarmy guy as an underdog is something I’m looking forward to.

Meanwhile, watching Phil try to hold down the fort while Claire pursues this city council position is a great way to provide a lot of laughs. Phil is a great dad, but he’s also a total goofball. He accidentally drugged his daughter, accidentally punched his son in the face, but when it came to Haley he was quick to implement the correct punishment after it was revealed that she’d lost $900 trying to buy fake IDs for her and her friends. Phil might screw up every now and again, but he can handle things for Claire.

Meanwhile, Mitch and Cam delivered so many hilarious moments this week. I cracked up when it was revealed that, after Cam chastised a father for bringing his kids to a violent movie, they realized they were in the wrong theatre and the family was actually there to see the Muppet movie. And New Lily almost won my heart when she overheard them telling the story and asked “You saw the Muppet movie without me?” With Cam already overdosing on aggressive for the day, the hit and run accident Mitch and Cam experienced after the movie further highlighted their differences and caused an argument between the two – Mitch wanted to follow the rules and call the cops while Cam wanted to chase him down. Even if it was on foot, waving his arms and squealing.

Jay faced his own problems when he couldn’t sell a douchey condo developer (Neil Schweibber from Freaks and Geeks! Or, you know, Samm Levine.) on his closets – they weren’t “wow!” enough or something. Gloria was dying to give him advice, but Jay wouldn’t listen. In fact, no one would listen even though Gloria was sure she had the answers to everyone’s problems. Jay ended up taking his frustrations out on the guy who stole Haley’s $900 as he, Phil, Mitch and Cam all charged over to his house to get the cash back. They all had something to prove, and it was Mitch who ended up actually tackling the kid to the ground as he tried to escape.

Gloria got what she wanted, too – she helped Claire overcome her fear of losing the election and she used her…ahem…assets to help Jay secure his closet deal. While this may not have been the best episode of Modern Family I’ve ever seen, I burst out into laughter enough times to prove that even a mediocre episode of this sitcom packs more punch than a lot of other shows I watch. There were tons of funny quotes and moments from the show, so my list is long: