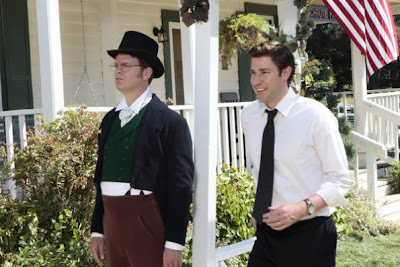 Last night’s episode of The Office gave us some insight into the character of Andrew Bernard, and while it wasn’t the funniest episode I’ve ever seen, I think the character certainly benefited from the backstory.

Andy’s always been desperate to please, and now we know why – his parents. After his parents threw a garden party for his younger, favored brother (played by Josh Groban), Andy decided to throw one of his own in order to impress both his parents and his new boss, Robert California.

The party was held at Schrute Farms, and Jim managed to mess with Dwight by sneakily selling him a made up book on throwing garden parties, filled with lots of ridiculous customs. For me, Jim’s pranks were the highlight of the episode. Meanwhile, Andy’s inferiority complex was in full swing as he tried to get his snooty dad to sing with him, but was once again brushed aside in favor of his little brother. Poor guy.

Andy wasn’t the only one setting out to impress at the party – everyone wanted to look good in front of the big boss, which seriously undermined poor Andy’s role as branch manager. They made toast after toast in Robert’s honor (Gabe was particularly desperate to stand out) until Robert himself made a toast proclaiming himself and Andy as useless management. Exactly what you want your hard to impress parents to hear about your new gig. Even the clothes everyone wore to the party were great, especially Kelly’s royal wedding style outfit and matching hat.

Pam and Angela’s pregnancy battle continued as it was revealed they were both planning on naming their sons Phillip. Pam in honor of her deceased grandfather, Angela in honor of…her cat.

The worst part for poor Andy came when his dad told him that he’d never be proud of Andy and this job and, thanks to CeCe’s baby monitor, everyone heard the painful conversation. But the end result, where everyone from the office hung out drinking beer and barbecuing burgers, was hopefully an important step for Andy – that even if he hasn’t been accepted by his dad, he has been by his new employees.

Like I said, the episode wasn’t my favorite but the pranks Jim pulled on Dwight and a few other moments kept it from being a dud. Here’s what else I liked: