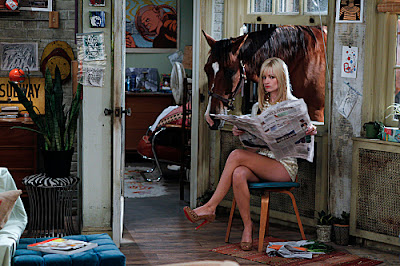 OK guys, I watched five episodes. I said I’d do it, and I did it. (Take that, high school teacher who said “Jill lacks self-discipline” on my recommendation for co-cop class!) (Sidenote: Co-op was a class where instead of going to school, you got to do an internship. I did it for two years, because who wouldn’t rather be making people coffee at an office instead of sitting in calculus?)

But back to the point – five episodes of 2 Broke Girls have passed, which was exactly how many episodes I said I’d give it before I would start to cut my losses and do something else after How I Met Your Mother, like read. Magazines. About TV. Anyway, what else I do isn’t important.

The thing is, I’m not entirely sure I want to break up with these two broke girls. The show has a lot of problems – that hasn’t changed. But I definitely have laughed more during the past couple episodes than I did during the first three. As Max and Caroline become closer as friends, the show gets stronger. They were even nice to Han this week.

This episode saw the girls make some cash by throwing an overpriced party for hipsters. A “90s Horse Party”, where everyone would dance ironically to 90s tunes and get a pony ride for a cool $100. The profits went to paying off Max’s debts, including a student loan from when she went to college and majored in art. (See, character development!)

Despite some improvements, I’m still not in love with this show. So I’ll compromise – I probably won’t review this show every week anymore, but I’ll keep watching it and check in on it once in a while. That way I can do other things, like read magazines about TV, while I watch it.

What do you guys think? Are you still watching this show? Do you see any potential in it?