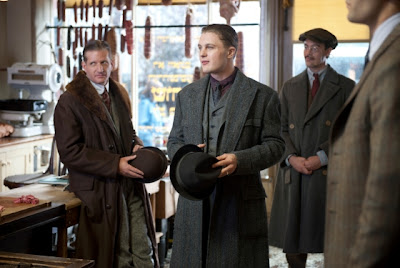 Why is it so hard for me to recap this show every week? Oh yeah, I remember – because there are too many characters and I find the storylines to be all over the place. But as always, there are still some storylines that keep me interested in the show.

Margaret is becoming a more fully developed and, frankly, less likable character this season – but in an interesting way. What’s up with her and those maids? One minute they’re BFFs, the next she’s like the ice queen. She was shocked when Nucky gave her an extra $2 for all the maids because she’d been expecting to cut their pay, and was even more shocked when the maids looked disappointed with the bonus since Nucky had come home drunk one night and promised them all a permanent raise. Whoops! “It’s a special kind of fool who relies on the promise of a drunkard,” Margaret scolded them, probably talking to herself. I thought that Margaret was sort of coming on board with Nucky’s less than ethical ways, but this week she seemed more uptight again – she was less than thrilled to find out that a loophole Nucky had found to help with his election fraud case involved transporting prostitutes across State lines. Listen lady, this is the lifestyle you signed up for! Margaret later asked Nucky for $100 for clothes for the children, but really stashed it away in a secret envelope of money. What’s that for?

Speaking of Nucky, it will be interesting to see what happens when he and Jimmy clash in Philadelphia. Just as Nucky struck up a deal to import booze using Philly ports (but losing 40% of the profits), Jimmy has made an agreement with a Jewish butcher/mobster in Philly to distribute his booze. It was a good scene that really highlighted how Jimmy has come into his own – which is more important now than ever since the Commodore is out of commission thanks to Jimmy’s mom’s boobs. 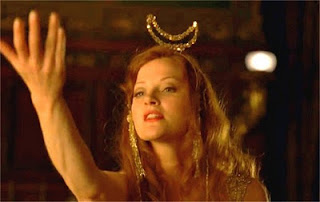 OK, can we talk about Jimmy’s mom for a minute? That is one crazy lady. One minute she’s doing a striptease for the Commodore so provocative that it gives him a stroke, and the next she’s beating the crap out of the guy after spoon-feeding him some pablum. Obviously, Gillian was treated very badly in the past. But she sure does seem conflicted.

Speaking of conflicted, let’s move onto Chalky White. I’m glad he’s getting more screen time this season because I think Michael K. Williams is a fantastic actor, and I’m also really intrigued by this new side to Atlantic City we’re seeing. There’s a lot of pressure on Chalky from members of the black community, and he’s also struggling at home. He’s like an outsider in his own home, sitting at the dinner family with his cultured and educated family and his daughter’s cultured and educated suitor.

OK, here’s a question for you readers – did we know that Agent Van Alden was palling around with guys who make bootleg booze? Admittedly, I haven’t always paid the best attention to his storylines, so I was a bit confused when one of his underlings told a coworker he’d followed Van Alden to the distillery, which had yet to be shut down. They went out there, but had the unfortunate timing of arriving right when the bomb Nucky had commissioned that Irish kid for exploded. 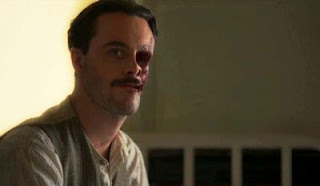 My favorite scene this week was definitely the one between Angela and Richard Harrow. Angela has always been a largely underused character on Boardwalk, and even here she was really just a vehicle to allow Harrow to shine. He told a heartbreaking story about his postwar experience and, in the intimate moment, took off his mask so Angela could pain the real Richard Harrow. I really hope this relationship turns into something – not necessarily something romantic, but Angela now has a much better understanding of Richard than Jimmy does.

My problem with Boardwalk Empire continues to be that too much is going on, and it’s not always clear what the stakes are. It’s like a chess game, but you can’t always tell why pieces are moving the way that they do. I’m forever left feeling as though I just don’t enjoy this show as much as other people do.