Well hello there again, America’s Next Top Model viewers! Are y’all “ready for mass destruction”? Because the models sure are! The challenge this week saw the girls break up into two groups, join up with a couple of actual NFL players, and then run around in skimpy outfits “playing football” and striking a pose for a photographer. Because that happens.

The girls were jock itching to win the challenge. “I have to win this one, especially because I’m a lesbian and we all have to win at sports.” Wow. Great example you’re setting there, Kayla. Way to challenge stereotypes and open people’s minds. Lisa was also very competitive – which bothered Bianca, who considers her to be a ball of fire without a flame. So…like…air? When it was all over the Blue Team won the challenge, which was Bianca’s, not Lisa’s.

OK, the photo challenge was actually a little cool. Angelea seemed like she got some cool photos, as did Kayla and Laura. Kayla won the challenge, and she deserved it. She got some ugly jewelry and an appearance on Tyra’s website.

In the photo shoot, the girls were posing in pairs alongside successful model (and Canadian beauty!) Coco Rocha.

Bianca and Shannon ended up working through their differences and delivering a good shoot, but my favorite Allison struggled when she did the shoot with Kayla. Angelea had some serious issues at first in her shoot with Laura, and although she pulled it together I was worried her breakdown could be seen as kind of unprofessional. Bre and Alexandria were certainly loud during their shoots, and it freaked Coco Rocha out. A lot. It was embarrassing. I was kind of hoping Lisa would bomb her shoot since I don’t care for her, but she and Dominique ended up impressing Jay the most of everyone.

Following the shoot, I was pretty nervous that Allison would end up in the bottom two – unless Bre’s erratic behavior landed her there instead.

So, how did the photos turn out? Let’s discuss.

Kayla and Allison: Despite struggling in the shoot, Allison didn’t get lost in this photo – I thought all three models looked beautiful, and in fact Allison outshone Kayla. 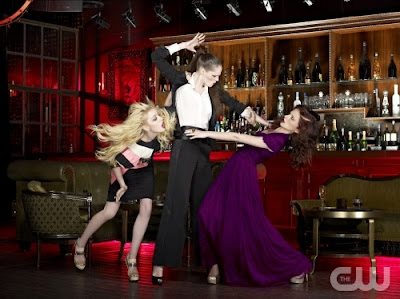 Bianca and Shannon: Can we just talk about how amazing Coco looked in this picture? Phenomenal. That’s a model. Also, Bianca looked fierce. No, literally – but in a cool way. Shannon looked average, and weak in comparison to the other two models.
Laura and Angelea: This was a great photo. Coco pointed out to the judges that Angelea had had a bit of a breakdown, but also complimented the way she pulled it together. Tyra wasn’t impressed with Laura, but I thought she looked good. Not her best, but good.
Bre and Alexandria: Again, with the Coco! That face! Those cheekbones! Alexandria looked stupid with her mouth open and Bre looked kind of like a mess – you couldn’t see her face well enough. When Coco mentioned that Bre had gone over the top with the emotion and screaming, I knew the judges wouldn’t be impressed.
Lisa and Dominque: Damn. It was a really good picture. Dominique stole the show – her face looked gorgeous. Lisa’s photo was good, but I find her so one-dimensional and tacky. I’m just not a fan.

As the judges deliberated, I really wasn’t sure who’d be in the bottom two. I thought Bre would be there for sure, but Shannon, Laura, Alexandria? I also wasn’t sure who’d get best photo – either Lisa or Dominique, I thought, and I would have given it to Dominique (with Allison in second). 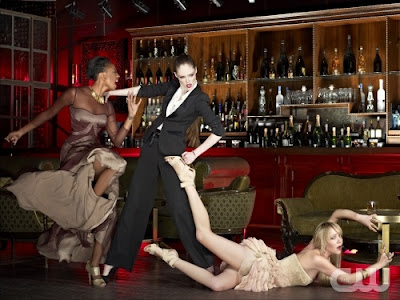 I was right – Tyra called Dominique first. Well deserved, and she did look rad at panel in those pants. Next was Lisa (ugh), followed by Bianca, Angelea, Allison (finally!), Kayla, Shannon and Laura – thank god, she looked way too cute in that dress to be left in the bottom two. That put Bre and Alexandria in the bottom two, which meant they had one hell of a bad photo. I think Bre has a lot more potential than Alexandria, since I think Alexandria routinely photographs old. Even though I didn’t like how Bre acted during the shoot, I thought she deserved a second chance. Tyra went the other way, though, and kept Alexandria in the competition.

What did you guys think? Did Tyra and the other judges make the right decision? And which of these girls do you think could ever come close to holding a candle to Coco?