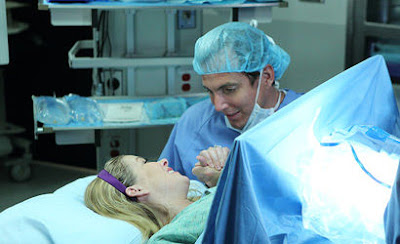 I’m glad that Up All Night decided to save the episode about Reagan giving birth for a few episodes in, because it was much more fun witnessing this now that we know the characters a little. This episode wouldn’t have been a great pilot because it’s not particularly representative of the show as a whole, but now that I’ve come to know these characters I thought it was really funny and well done.

We flashed back to about a year ago, with Reagan heavily pregnant and in denial about how much she sweats. She had a detailed birth plan for the arrival of Amy, which included a special iPod playlist, a headband and a female doctor. I think what made this material so funny was how realistic it all was – I’d care about my hair getting frizzy or pooping in front of a hot male doctor, too. (I don’t plan on having kids for a little while, but I’m already compiling a list of rules for when I give birth. They include: No photos until I’ve cleaned up, as much drugs as possible, don’t hand me the baby until you’ve cleaned all that gunk off of it, and if I can sleep through the whole thing a la Peggy Olsen in season one of Mad Men, then let’s do it that way.)

I loved how Reagan was determined to really rock the birthing process. We know now that she’s really competitive and wants to do everything (be an awesome mom, be awesome at her job), so you had to laugh when she said they told her labor would take five hours “but I’m gonna do it in two.”

Meanwhile, Ava was used perfectly in this episode as we saw her try her best to rise to the occasion for Reagan. From cutting poor Missy’s hair into the world’s ugliest style to shouting out random childbirth related words in the hospital to delivering (seriously, no pun intended there) the best headband she could find, she hit the right chord of hilariously self-involved diva and reluctantly supportive friend.

I also liked that the show steered clear of those typical labor scenes where the woman screams at the man for getting her into this situation. There was nothing but love between Reagan and Chris. He was there to support her, and to remind her that there’s nothing wrong with having an epidural, or having a C-section since the baby’s head is too big. I think Up All Night managed to pull off so many “isn’t childbirth disgusting?” jokes because the sweet, loving material Reagan and Chris had balanced it out.

Also, I am apparently too young to have gotten the joke when Reagan sang a song called “Lightning Crashes”, but my boyfriend quite enjoyed it. And then groaned when I said “What? Who’s Live? Is that a boy band?” It’s not. And I was only eight years old when that song came out.