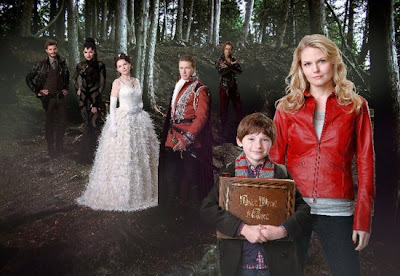 I can’t believe I just ripped off an Avril Lavigne song for a blog post title. I can’t stand her. But it fit well, so here we are.

I DVR’d ABC’s new show Once Upon A Time on Sunday night and, since there’s almost nothing on on Monday nights, watched it when I got home from work yesterday. The jury’s still out on whether I like it, but it held my interest enough to earn a few more episodes. After all, this was just the pilot and this series has a lot of setting up to do. It had to establish not one but two worlds, two sets of characters, and two intersecting story arcs. That’s a lot to pull off in, and Once handled it…decently.

The show stars Ginnifer Goodwin, who I love, and Jennifer Morrison, who I’m still trying to forgive for Zoey on How I Met Your Mother. It’s no coincidence that the two look alike – technically, Ginnifer plays Jennifer’s mother.

…In a Land Far, Far Away 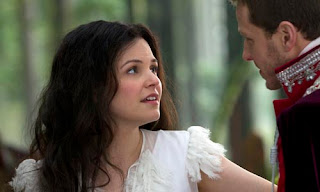 OK, let’s start with the fairy tale world. Snow White and Prince Charming meet, there’s a poisoned apple, some little people, yadda yadda yadda. They get married (her wedding was insane – what was up with that hair?) and are supposed to live happily ever after, but the evil queen interferes. She curses the fairytale land and sends everyone to live in real time – everyone but Snow White’s newborn baby, who escapes through a magic wardrobe built by Geppetto. Yes, in this fairytale land, lots of stories and characters interact. A particularly creepy Rumpelstiltskin (spell check knows that word, but not Geppetto?) also makes an appearance.

In order to help Emma escape, Prince Charming has to battle some evil dudes. When the curse hits, he’s seemingly dead (but I guess not quite…) thanks to a sword to the chest.

So that’s sort of it for our fairytale friends. They’re sent to live in Storybrooke, Maine with no recollection of their literary lives and the only hope that one day, little Emma (Snow White’s baby) will return to save them.

So, cut to the real world. A precocious young boy hops a train to Boston to track down his birth mom, a cranky young bail bondsman, Emma. (Get it?) Emma drives the kid, Henry, back to his hometown of Storeybrooke, and finds out that he thinks everyone in the town is a character from a fairytale, trapped there until Emma can save them. Naturally, since he is a precocious little moppet, he’s right.

Snow White is Henry’s real life teacher, Mary Margaret Blanchard. (My biggest problem with that character is the name – is she an exiled fairytale character or an Amish milkmaid?) And her Prince Charming? He’s a John Doe in a coma whom she visits at the hospital. The evil queen is there too, and just happen’s to be Henry’s bitchy adoptive mother. Other characters appear too, like Jiminy Cricket as Henry’s psychiatrist and Rumpelstiltkin as Mr. Gold who owns the town. Um, what? Can someone own a town? Because if so, I’m pretty sure Oprah would. So if Oprah does not own a town, no one does.

(Actually, scratch that – according to a quick Google search, you apparently can own a town. Oprah, you best get on that.) 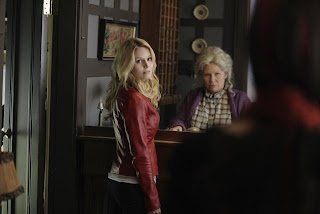 Obviously, Emma doesn’t believe anything Henry says. But a series of events keep her in town. First a wolf appears on the road, causing her to crash her car right before leaving. Next, Henry runs away again and she agrees to help find him. And then, because he’s a precocious moppet, she decides to stay in town – for a week, because that’s how long he said it would take to convince her. And naturally, as soon as she booked a room at the local B&B, the frozen-in-time town clock began to tick.

One of the problems with Once Upon A Time is that it doesn’t seem to know what it is. Is it whimsical? The people are too miserable for that. Is it dark? It’s not twisted enough in that case. I’m intrigued by this plot, but I’m not sure what to expect from the show. In the pilot, the show didn’t seem to have an ounce of a sense of humor about itself, and I think it needs that. I’d like to see Jennifer Morrison lighten up a bit as Emma, and I’m also wary about this Henry character – the enthusiastically optimistic moppet schtick could get incredibly grating if played the wrong way. I found the most delightful character to be Goodwin’s spunky version of Snow White, so I’m hoping she brings some of that color to her Storyebrooke character as well.

Did any of you guys watch Once Upon A Time? What’d y’all think?

Tags: Once Upon A Time