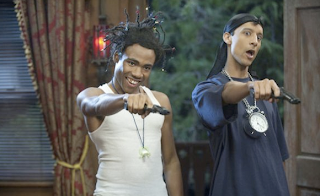 Community has really had a strong third season so far as they toned down the wacky a tad and instead have opted to explore different methods of storytelling. This may have alienated a few viewers (maybe, like, four out of the 19 people who watch Community) but for me it’s really working. I loved the Yahtzee/alternate timelines episode and I loved this scary storytelling Halloween episode almost as much. I continue to be impressed by the way Community is using these micro-stories to reveal major truths about the characters and how they interact with each other.

“Horror Fiction in Seven Spooky Steps” began when Britta confided in Jeff that the personality tests she had everyone take for her psych class revealed that one person in their group had an extreme personality disorder. I loved this – Community does a great job of simultaneously making sure we care about characters but also making them incredibly flawed. Almost everyone in the study group could have an extreme personality disorder. Jeff is a narcissist, Annie is an insane perfectionist, Britta is annoying, Pierce lacks empathy, Shirley is a religious zealot and Abed mostly functions in a fantasy world. The only person I’d have trouble believing was the crazy person is Troy, though you never know where that inferiority complex of his stems from.

Britta wanted to know which of her friends might attempt to murder everyone in their sleep, so she told a scary story in order to gauge everyone’s reactions.

Britta’s story featured her and Jeff making out in a car in the woods, and then a guy with a hook came and killed them. Abed’s criticism of the story was right on point – you didn’t care about the characters and it wasn’t scary because they didn’t make the same choices you’d make. Check and mate. (My favorite part of this story was the radio announcer saying “An escaped convict from the asylum has escaped, and he’s mental, and he’s on the loose and stuff,” and “He was last seen in the woods and has a thingy for a hand, a hook-thing where his hand should be, you know what I mean.” Britta does not have a future in writing, that’s for sure.) 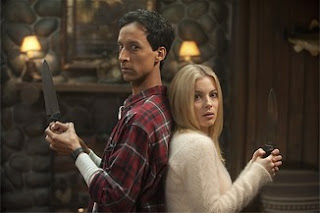 Having pointed out the key flaws in Britta’s story, Abed then told his own factually plausible story. This was probably my favorite, because Abed wanted it to be so realistic. He and Britta were in the cabin, having what Abed would consider to be a romantic time. That included getting the cabin on a discount because it’s nearby to an insane asylum (Britta finds this frugality attractive) and saying “I’m comforted by your shiny hair and facial symmetry. I just brushed my teeth so this would be the optimal time to kiss.” He turned on the radio and spent quite a while humming a tune, because no one turns on the radio right when the important announcement about a scary killer on the loose comes on. (One of the best moments of the night? Troy grooving along as Abed was humming. Amazing.) Once they heard the warning, Abed called for help on his fully charged cell phone and then he and Britta stood back to back holding knives waiting for help to arrive. They’d eventually die, but not til it had been earned! 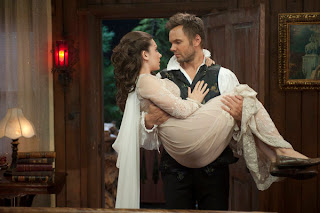 Annie went next, knowing she could one-up Britta and Abed in the horror department. She told a ridiculous tale of teaching a vampire version of Jeff to read while a bitten-up Britta lay discarded on the floor, only to turn the tables when Jeff tried to bite her and transform into a scary werewolf that very graphically ripped Jeff to shreds. It was disgusting, and it had a twist! It also had Annie saying “she ripped into his torso like a gerbil shredding a Quaker oats box, sending chunks of viscera and an aerosol mist of blood all over the skanky concubine,” which might be my favorite thing she’s ever said.

This was one of the stories that really revealed certain things about the characters. Not only does Annie see herself as pure while Britta is used up and tainted, but that’s kind of how Jeff sees them too. He doesn’t mind messing around with Britta, but it’s like he’s saving Annie for when he’s ready for the real deal.

Troy was annoyed with the “praise” Annie’s story received (Britta describing it as “discompassionately macabre, as if without the slightest regard for human life”), so he delivered his next. It was exactly what I would expect from Troy – he and Abed were fighter pilots gunned down in the woods, and they stumbled upon the cabin of Pierce as a mad scientist. They were drugged and awoke sewn together…and with new psychic powers! They terrorized Pierce (butt sewn to his chest, feet for hands) and also telekinetically cut a sandwich in half for a snack. 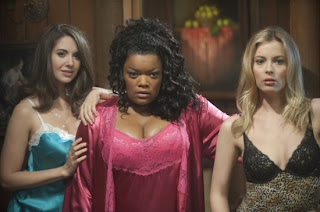 Naturally, Pierce wasn’t thrilled with his role as the villain in Troy’s story so he told his own. Shirley, Britta and Annie were dressed in sexy lingerie as his 1970s Hugh Hefner style playmates. Troy and Abed appeared as gangsters (Troy’s hair!) and Pierce swiftly took them out.

No one was a fan of Pierce’s story, so Shirley stepped up to the plate with what she described as a classic good vs. evil story. This was another one that revealed a lot about group dynamics, as it once again highlighted how Shirley feels picked on and at the bottom of the study group totem pole. She set the scene with the study group having a drug and booze fueled rave – Britta poured an entire canister of weed all over her body, because Shirley clearly doesn’t know how drugs work. They were attacked by locusts and other end of days type things, including Dean Pelton as the devil. Shirley appeared as an angel to let them know they’d burn in hell and bid them farewell. She floated away, saying “I forgive yoooouuuu.” Oh, Shirley. 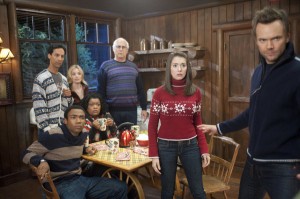 As the Halloween pre-party degenerated into a lot of bickering about grudges and favoritism, Jeff told a heartwarming tale of the group wearing warm sweaters, drinking cider and rehabilitating Chang the Murderer with the power of hugs. No one was having it (because it’s a pathetic story) but then it turned out Britta had “Britta’d” (meaning made a small mistake if you ask Britta, likely meaning FUBARed if you ask anyone else) the test results by putting them in the machone backwards. So they re-ran the test results and it turned out everyone was insane, except one lucky person.

I immediately knew that Abed would be the sane one, since he’s always been the one with the most easily diagnosable undiagnosed personality disorder. And that’s good news, since I got Abed in the Community personality quiz! And the whole episode ended with “Troy and Abed sewn togeeeeeeether!” – perfect.