I don’t tend to follow characters anymore. I find it too hit or miss. I recently read some issues of X-Men Schism, and really didn’t like how Logan was portrayed. I know Wolverine as a loner/killer who is the “best at what he does.” Well for me, the best would have waited until after the battle with the Sentinel to smack Scott silly.

Writers are more dependable. It’s rare that someone who I think is pretty good writes something that truly SUCKS, though there are exceptions (And I’m looking square at you, Justice League: Cry for Justice). That doesn’t mean I like everything from a writer, but it means that I rarely throw it down and think it was a complete waste of time and money.

So, I wasn’t too impressed with Justice League Dark #1. On my blog, I gave it a C-, which would roughly translate to a 3.5 on my scale. It wasn’t horrible by any means, but I seriously thought about dropping it for month #2.

But then… He pulled me back in…

He’s probably one of the few that could do it. The accent and the attitude and the sly smile promise of dastardly things yet to come. One puff of smoke from the Silk Cut hanging out of his mouth. Yeah Constantine is one of the few characters who I will always follow.

If it was anyone other than Milligan writing, there’s no chance I’d be back. But one more go. 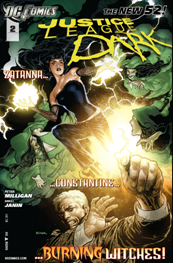 In the last issue, Madame Xanadu watched as the Justice League, Superman, Batman, Wonder Woman, and Cyborg, was unable to stop the threat of The Enchantress. As a result, several other ‘heroes’ from the magical world felt themselves being pulled towards her: Zantana, John Constantine, Deadman, Shade the Changing Man.

A: June Moore was the former host of The Enchantress in the DCnU

Q: John Constantine is trying to find Zantana? Is he aware of the issue with The Enchantress, or is he outside of the loop?

Q: Why is Enchantress targeting Zantana and Dove? At the time of the story, neither one seem to be a threat to hear or even pointed in her direction?

Q: Is Madame Xanadu truly allying herself with The Enchantress, or is it a feint?

Ahh, now things are heating up. I really enjoyed this, and the flow was much better after we got the introduction garbage out of the way.

How do you know that someone is a good writer, when they write a comic book story where nothing happens, and yet you sill really like it.

I love how they are portraying the characters as not necessarily being the paragons of human virtue. Deadman craving physical relationship with Dove, and even

suggesting a same-sex tryst while taking over June. Constantine getting beat up in a bar, after starting a fight. For the non-Vertigo universe, this is a nice change of pace.

Zantana riding a motorcycle, I’m really digging that. A good change for the character, I think.

The book had a very nice flow to it, moving between the characters very subtlety. Every transition made sense, and flowed very well with the story.

I like that they didn’t try to force Shade the Changing Man into this story just to round out the list of characters. Milligan knows that he has time to craft his story and isn’t rushing it just to make sure everyone 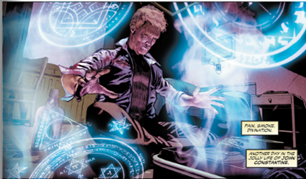 gets some screen time.

The scene where Constantine is doing the divination magic with a blood-stained shirt and a beat-up face totally captures exactly who John Constantine is. It really shows why he is still one of the most unique characters ever created for comics.

I hope this comic gets to the point where Constantine gets more than 2 pages appearance. Yes, I should read his own book if I want all Constantine all the time. But 2 pages of Constantine versus 9 pages of Deadman is not a ration I prefer.

I liked Boston Brand being a bit of a jerk. I mean if you’ve spent the last few years being a body-less spirit who can only get pleasure while taking over someone else’s body, then you’re probably going to turn a little bit selfish.

I think Dove is more interesting in this book than she is in her own title. When Hawk and Dove gets cancelled, maybe she can move over here permanently. Heck, you can bring Hank over as well.

It’s a shame that Dr. Fate and The Spectre are probably delegated to the new Earth-2, because they would really be interesting additions to this book.

The Enchantress talking to Zantana and Dove through the car radio is an interesting device, and extremely creepy if done in real life. I thought that worked really well.

Mikel Janin’s work is very good overall, but I really appreciate not turning The Enchantress into some sexed-out villain. Okay, she looks a little too much like Mum-rah from the Thundercats, but still it’s an image that works pretty well, I think.

Yeah, maybe I was too harsh on the last issue, and maybe I’m too complimentary of this one. But going with my gut, I enjoyed this one much more than issue #1. For me, everything came together very nicely. I think the story could have a little more action, as the only action was darkness coming after Zantana. But I’m overall pleased, and looking forward to next issue: