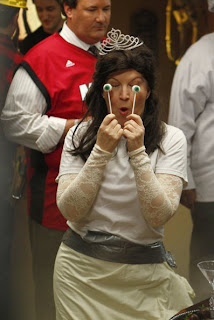 Maybe it’s because The Office has always done holidays so well, but I think last night’s episode, “Spooked”, might have been the best yet this season.

We opened with Andy going through the process of approving everyone’s Halloween costume. He had three rules: “Don’t be offensive, don’t be cliché, and don’t take the first two rules too seriously.” Good call, Andy – there have been so many costumed mishaps over the years, I’d want to make sure Meredith wasn’t going to show up half-naked too. The best, of course, was Kelly and Meredith arguing over who would get to show up as beautiful bride Kate Middleton. Kelly had a gorgeous lace gown; Meredith had a white T-shirt duct-taped to a skirt. Meredith won.

The cutest costume belonged to party planner Erin, though, who arrived as Wendy herself, of the restaurant chain Wendy’s. Perfect! She planned what she thought would be a fun Halloween party, but when Andy found out that Robert California had high expectations, he asked for it to be a little scarier and sexier than planned. The interactions between Erin and Andy displayed the romantic tension that still exists between them, and Erin’s own anxieties were heightened when Andy told her he wanted to talk at the end of the day. The poor girl thought she was getting fired. 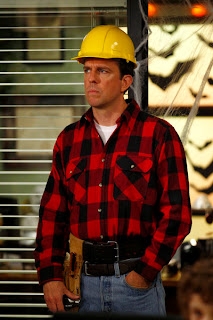 The office crew came up with some great costumes this year, from Oscar’s “Oscar Liar Weiner” outfit to Gabe jacking Kelly and Toby’s matching skeleton idea. Robert showed up as Jack Nicholas and noted that Andy, who had dressed as a construction worker, “You, on this day of fantasy, are…a laborer.”

As Robert went around the office questioning people and getting them to reveal their biggest fears (Kelly’s is never marrying, Kevin’s is mummies) I wasn’t sure what he was up to – after all, it was long ago established that he likes to have short but intense conversations with people. But the scary story he told before leaving that incorporated in all the fears was just perfect. This character is beginning to grow on me.

The most awkward moment came when Robert stuck around for Andy’s conversation with Erin after her attempt to make the party scary and sexy was an epic fail. He wasn’t firing her, he just wanted to tell her that he was dating someone new. They’d be on 31 dates. Ouch. I really want to see Erin and Andy back together, but I also think the writers can get some good material out of Erin coping with this new romance. She used to lean on Michael for fatherly advice, and without that support I’m not sure how she’ll handle this.

What did you guys think of the episode? Here are some other highlights from “Spooked”: