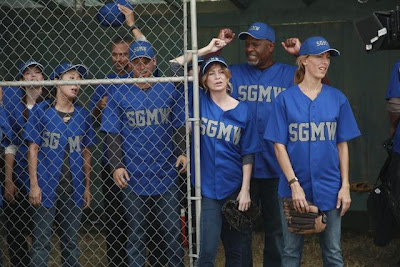 OK, I kind of fell out of recapping Grey’s Anatomy for the past couple weeks, but with good reason – Thursday night comedies are way more fun to watch, which means Grey’s usually gets saved for Saturday morning viewing. It’s the perfect companion to my Saturday morning ritual of a caramel latte and baked good. I also haven’t been crazy about Grey’s this season. I felt like last season had started strong and went out weak, with Meredith and McDreamy fighting once again and other characters’ fates also up in the air. But I really dug the most recent episode.

The hospital baseball tournament was just the kind of thing I love seeing on Grey’s. I love when characters get to interact in a setting outside of the hospital – I mean, you can’t get any better than twisted sisters Meredith and Cristina getting drunk in the outfield. Owen may have been in charge, but the Chief is still the Chief when it comes to some things. He managed to get Bailey to get over her grudge against Meredith so the two can work together on the diabetes trial.

Back at the hospital, Cristina has finally graduated from Teddy’s “back to basics” training. She actually let Kepner operate on a guy instead of bossily taking over the procedure herself, which was enough of sign of change for Teddy. Now she gets a reward of making a bucket list of surgeries she wants to do, which Teddy will try and get for her.

Derek was kind of a jerk this week. He refused to operate on a little girl unless her mom agreed to go for the risky go big or go home surgery, rather than the safer surgery that wouldn’t have been a permanent fix. And then he blamed his arrogant testiness on Zola. Sorry Derek, but I didn’t buy it. Of course, this is Grey’s Anatomy, so not only did Derek convince the mom to go for the scary surgery, but he successfully did it. At what point will we learn that Derek Sheppard actually has the blood of a Greek god running through his veins? The guy seems to perform a groundbreaking surgery that no one else can do at least twelve times a season.

Speaking of Zola, thanks to some ballsy wheeling and dealing Alex did, Derek and Meredith have a court date for Zola’s custody case. Yay! I really want them to end up with the baby, if only because I think having a kid would introduce some much needed plot development. It’s done wonders for McSteamy.

Oh, and speaking of McSteamy? Lexie’s definitely not over him, as evidenced by the way she whipped a baseball at his new girlfriend’s boob during the baseball game. Avery knows she’s not over her ex, so it’s only a matter of time before that relationship is kaput. I won’t shed any tears since I never liked them together anyway. Who do you think Avery should be with? April? Or – gasp! – someone who doesn’t work at the hospital?