I have really enjoyed a lot of the new DC Comics New 52 relaunch. It’s breathed new life into several characters and franchises plus allowed for the branching out into non-traditional fare. 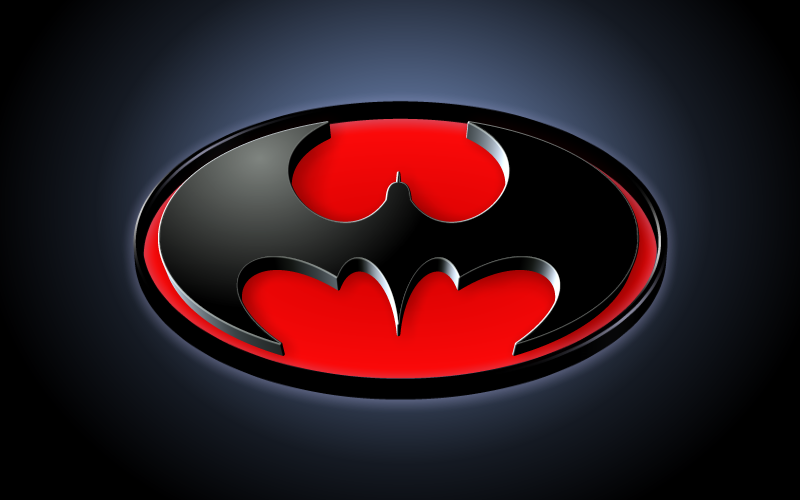 On the super-hero front, which is what I come to the DC universe for, I have particularly liked the profile that Batman’s ex-Robins have gotten in the New 52 of ongoing titles. And, they’ve been well differentiated in Nightwing (featuring the first grown-up Robin, acrobat Dick Grayson as Nightwing), Red Hood and the Outlaws (starring the second grown-up Robin, street fighter Jason Todd as Red Hood), and Teen Titans (featuring the third Robin, teen detective Tim Drake as Red Robin)… and even an unlikely super-hot non-New 52 Batman title.

So, here we are in month three of the DC Comics Relaunch with a new batch of reviews, following last month’s sophomore ex-Robins triple review.

On to the reviews…

Issue three opens where the last issue ended with Kid Flash attempting a jail break from N.O.W.H.E.R.E.’s labs and bumping into a not-so-bright jailed Solstice… an East Indian teen heroine in the pre-Flashpoint DCU who had sun-based powers. In the olde Teen Titans series it seemed like she was being set-up as Raven’s foil, a darkness-based teen heroine. The Solstice that Bart Allen / Kid Flash, frees is a darkness wrapped character with veins of light threaded from head-to-toe. With Raven rumored to show up in Teen Titans in 2012, perhaps this Solstice is a combination of both characters. Raven was a mystical character as well so could be “in” Solstice’s head literally, but time will tell and I’m intrigued by this new take on Solstice. 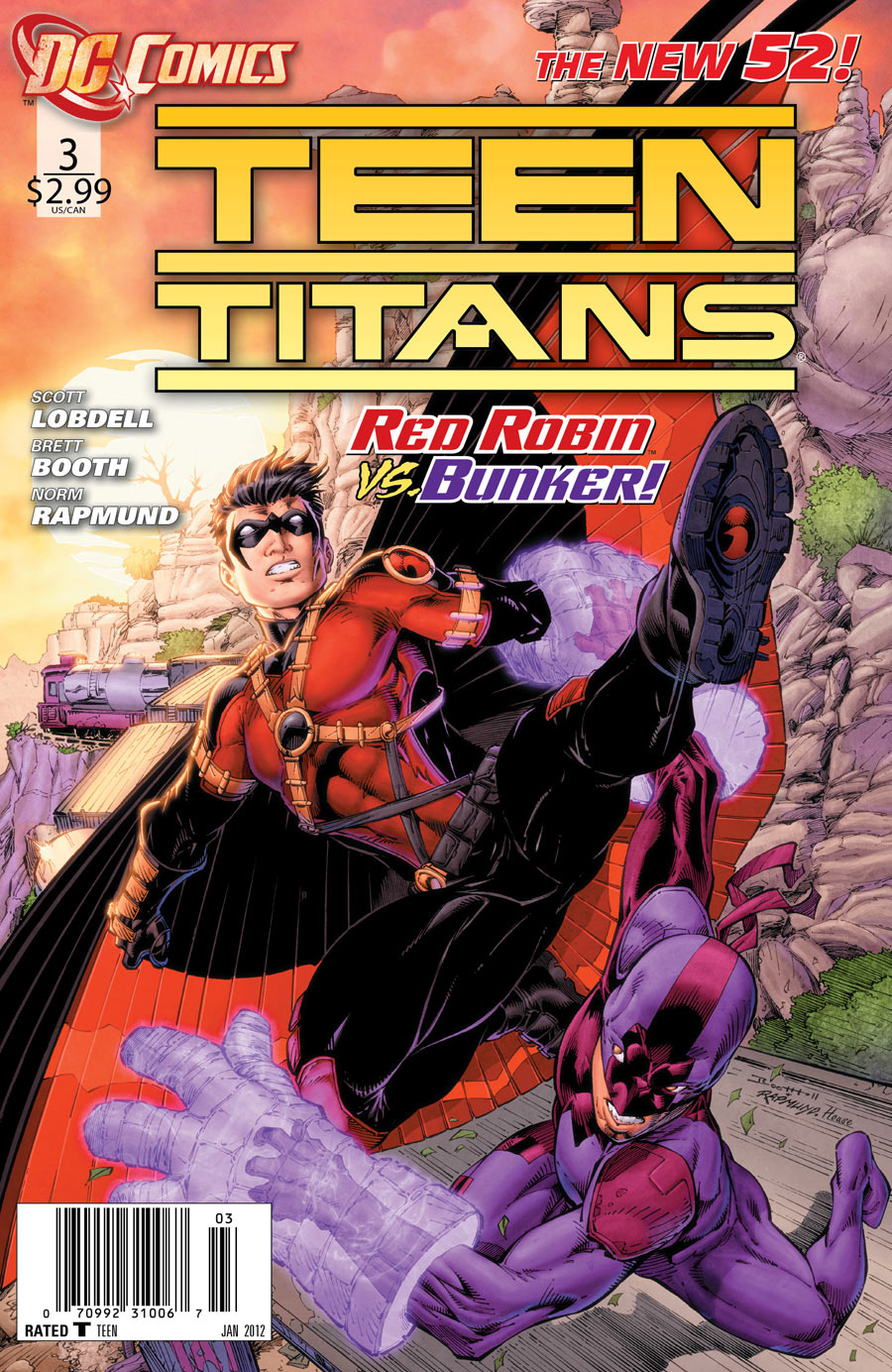 What I also liked about the Kid Flash / Solstice escape was the fact that we see the characters learning to use their powers; a sentiment echoed by a few fans I know. We see Bart clumsily freeing them, but trapped in a frozen tundra setting up a mystery for issue #4.

This issue also sports the much ballyhooed debut of the flamboyantly homosexual Bunker; a Hispanic character with a set of small purple psionic bricks that he can use as powerful boxing gloves (sorta like Green Lantern) and, eventually, a brick platform to fly around on (a la Terra in the olde DCU and her sentient, um, dirt).

Red Robin and Bunker have the obligatory tussle, before Bunker realizes Tim is the digital deep throat that has been trying to help super-powered teens online to avoid the clutches of N.O.W.H.E.R.E. We also see Skitter, the insectoid teen heroine, in some kind of hibernating metal egg… setting up another mystery for issue #4.

We also get a sexpot fanboy spot with Wonder Girl in the issue, but that’s about it for her in the issue. It’s always difficult to give every team member a solid “moment” in every issue; a challenge for team books generally.

This is a high energy issue, drawn spectacularly by Brett Booth and Norm Rapmund. I particularly liked the design of the steampunk villain Detritus; Booth has been very strong generally in his designs of this incarnation of the Titans and their foes. That said, I’m not a fan of Bunker’s costume or powers, but I am curious where Lobdell takes the character. Lobdell and Booth have been deliberately trying to do different things story-wise and visually in the TTs, and I appreciate that while not totally sold on all aspects of their efforts… yet.

Teen Titans #3 is an entertaining and an exciting romp that sets up issue #4 where the Teen Titans team will be together for the first time in this new universe. Now that all the “set up” is over, and we’ve been introduced to our motley crew and the world they are manoeuvring in, the book hits the high gear with the eventual confrontation with “The” Superboy in next month’s December issue.

Red Hood and the Outlaws #3:

Scott Lobdell’s other team book in the New 52 is Red Hood and the Outlaws featuring another former Robin with a smaller core cast allowing for more face time for all. Writer Lobdell is joined by artist Kenneth Rocafort who is doing the best work of his career.

It is difficult to describe Red Hood and the Outlaws since it really is a genre-bending book. It’s anchored by three troubled not-so-squeaky-clean “heroes” in Red Hood, Arsenal (former Green Arrow sidekick Roy Harper) and Starfire (the galactic princess super-powered Koriand’r), but their adventures are anything but traditional super-hero fare. With Paul Cornell’s Stormwatch, Lobdell’s RH&TO’s is crazy non-conformist fun.

Like many of the DC Comics Relaunch’s New 52 books, most of the first few issues have been spent setting up the ground rules of the series, establishing characters, and jumping headlong into action. Lobdell achieves all of these in issue #3 with a huge exclamation mark with elements of sci-fi, fantasy, buddy cop drama, action, and more. It certainly is not the backdrop I’d expect to see Jason Todd or Roy Harper (in particular) in, but it all works in some bizarre and entertaining way. 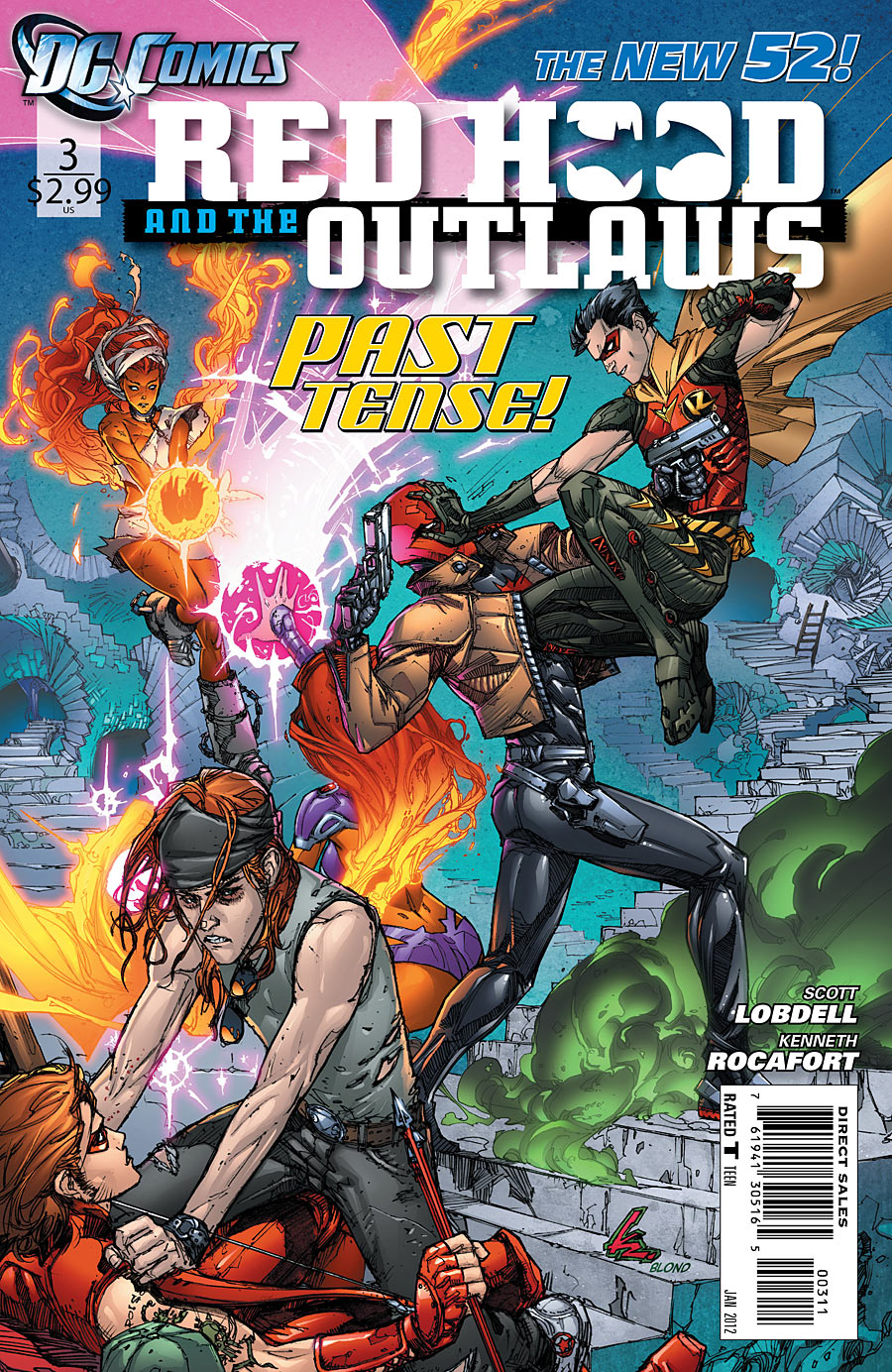 Our team goes on a quest to find out what the villain-thing known as the Untitled is up to regarding Jason’s olde mythical sect; who trained him in some dark arts during his boyhood post-Batman-and-Robin life. S’aru, a four millennia old mystical boy-king holds our heroes’ most cherished memories as collateral during their sojourn to find out about what the Untitled is after.

It is a very interesting plot device as throughout the issue, as our team goes on its quest, we pan back to S’aru who can’t help himself by peeking into the most cherished moments of Red Hood, Arsenal and Starfire. I won’t spoil those moments, nor the wacky quest the team goes on, but through the cherished moments of the team readers learn that Starfire is stronger-willed than the internet may have believed after the much talked about debut issue of this series; Arsenal has overcome incredibly destructive inner-demons that took or takes herculean inner strength to keep at bay; and Red Hood (and Bruce Wayne’s Batman) may not be as cold and detached as they appear.

It is also cool to see the retooled, rebooted, relaunched, revamped Robin costume Jason Todd wore in his tenure as the second Robin for Batman. I love the new design and am glad that the short pants and Peter Pan slippers are gone. Any fan interested in the past of Batman, should pick up this issue, for Jason’s Robin reflections.

I love the sheer nuttiness of this issue and the rollercoaster Lobdell takes our characters and, more particularly, readers on. You can’t help, but empathize with these characters and even like them… even the internet’s seemingly current bash worthy darling… Starfire. These are all strong, different yet complementary, flawed characters trying to do the right things, but perhaps in the wrong ways. They are very relatable and compelling.

Kenneth Rocafort is a genius on art. He brings to life the seemingly conflicting worlds, concepts, and scenarios of mad genius Scott Lobdell. It is because of Rocafort that this genre-bending and blending title seems visually credible and engaging, and not a train wreck of competing imagery.

Do yourself a favor: if you love crazy thrill rides and superb art, pick up Red Hood and the Outlaws #3. The ending alone, focusing on Jason Todd’s most cherished moment as Batman’s Robin, is well worth the price of admission.

With each passing month of the New 52, writer Kyle Higgins maintains his place as of one of the DC Relaunch’s top writers. His Nightwing adds layers and depth to Dick Grayson and the character’s alter ego as DC’s, not just Batman’s, originating sidekick and now solo-hero Nightwing. With artists Eddy Barrows and Edward Pansica, the creative team uses issue #3 to flesh out Dick’s past with the importance and modern-day relevance of Haly’s Circus.

Dick Grayson’s childhood roaming circus troupe, under Haly’s big top, feels like its own character in Nightwing #3. At the funeral of Mr. Haly, the owner who died at the hands of the assassin “Saiko”, revealed to mean “best” in Japanese, we see the bearded lady and others that make up the troupe. This a colourful cast for a circus that Dick now owns, to the displeasure of Haly’s adult son. 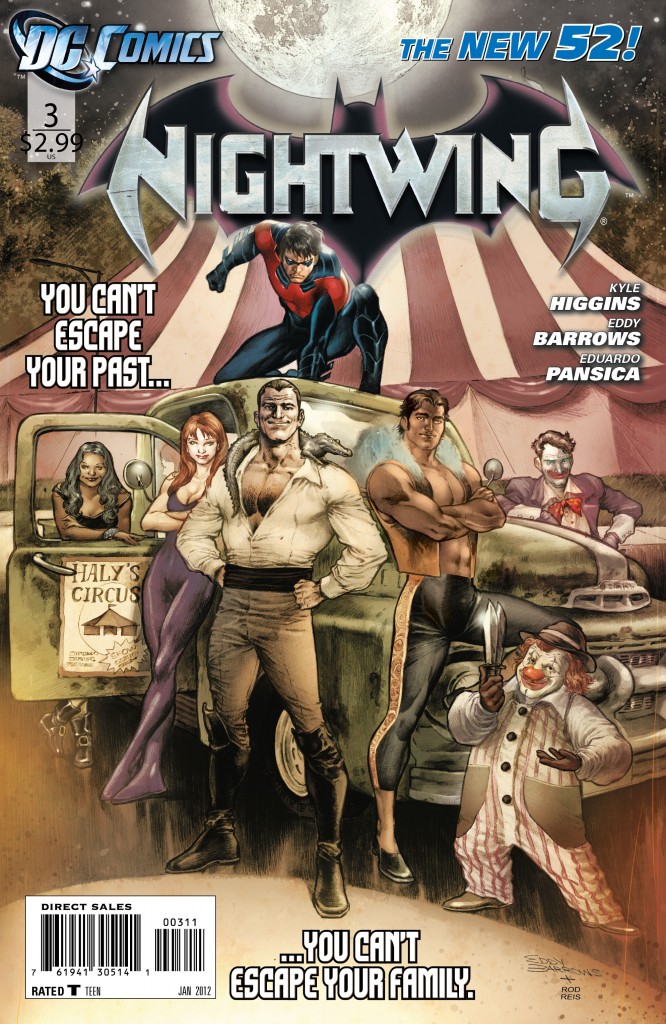 The comments of the funeral attendees range from sadness to anger directed at Mr. Haly; it felt like a whodunit – despite us knowing, um, whodunit – where Higgins fleshes out some more of the troupe, gives readers a sense of how Haly was regarded, and sets up future story beats as Dick stays with Haly’s on its cross-United States travels into future issues. We also get a touching flashback to open the book so we start off by feeling what Dick feels for this early father-figure in his youth.

Childhood unrequited-sweetheart Raya continues to be Dick’s modern day requited :) love interest; and even through their moments and discussions about their childhood, we learn more about the character of Dick Grayson and a depth is added to his past that hasn’t been tackled by many, if any, writers before Higgins. Dick’s past is given an importance, a relevance, and a vibrancy that makes Nightwing more relatable than he’s ever been.

We also get in-costume Nightwing action as our hero confronts a childhood circus acquaintance caught up in the underworld and even with Saiko – the latter doesn’t get a lot of face-time this issue, but his presence permeates the book nonetheless.

Through a metahuman confrontation, we see Dick confront the fears and pain over his parents’ circus trapeze death and even learn that Dick’s early Nightwing costume (lapels and all) were inspired by his father’s acrobat attire; this appears to be a shift in continuity as I believe it was revealed a few times in the olde continuity that Dick’s first Robin costume was inspired by his parents’ “Flying Graysons ‘” attire. I do really like how DC isn’t just blurting out what the new “past” continuity is, but letting it seep out organically by the parent writers in their respective New 52 titles. In Higgins capable hands, it works well.

Nightwing #3 is a satisfying read drawn well by Eddy Barrows and Eduardo Pansica. They deliver on the emotional moments, particularly involving Dicks past pain, needed to service the story as well as the dynamic action of the in-costume heroic scenes. I wish Eddy Barrows could have penciled the whole issue, but Eduardo Pansica’s contribution wasn’t so jarring and was pretty much in lock-step with the visual tone established by Barrows.

This book is highly recommended, as is this particular issue, as you get the dramatic Dick Grayson moments accompanied by the action-packed Nightwing moments. Dick is just as an important part of the book as his alter ego; that is a credit to Kyle Higgins who “gets” the character and knows that what’s behind the mask is just as important in this genre as the mystery man moments. 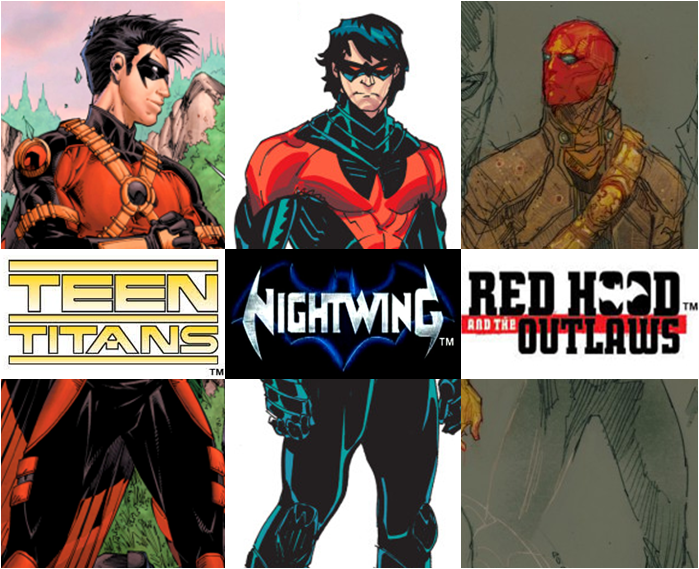