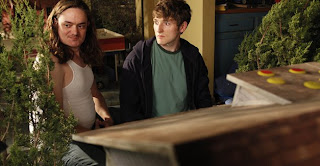 Just a short note on Raising Hope today: wasn’t “The Men of New Natesville” delightful? It was weird, quirky, funny and surprising – all things I love to see on Raising Hope. I loved that we got to see a whole new side to a character who’d previously just been a wacky background character.

Frank’s scale model of the entire town was just hilarious, and the revelation that Jimmy and Frank had been bullied by the same kid was a great reason for them to bond. The scene where Virginia intimidated the bully into leaving her kid alone by smearing lipstick on his face and demanding he walk like he’s wearing heels? Amazing. “You like to make fun of boys wearing girls’ shirts? For your information, it’s the latest thing. It’s called meterosexual, only you wouldn’t know that, ’cause you don’t read Parade magazine!”

And of course, there’s the fact that Sabrina was impressed by Jimmy confronting his old bully (who was a man! A very large man, with a penis and everything!), even though it resulted in a black eye. So we’re continuing to make progress there.