OK, another predictable episode. But NOW Survivor gets interesting, right?

So far, Coach’s alliance has managed to play a game very similar to the one Boston Rob played last season. Sure, there are a few key differences – Boston Rob and Co. went into the merge with a majority over the opposing tribe, this season the tribes merged with even numbers and it was a move from Cochran that determined the course of the game. And try as he might, Coach will never be as savvy of a player as Boston Rob was – he doesn’t have quite the same iron grip over his tribe, and unlike Rob’s Zombies, Coach’s alliance-mates are, for the most part, capable of making their own strategic moves and decisions.

The similarity is that for two seasons in a row, a core alliance formed very early on in the game has stuck together until the end. And both alliances were headed by returning players.

At several points during this game, players in Coach’s alliance could have jumped ship in favor of a different sub-alliance. They could have decided it was smarter to go to the end with Cochran and kept him over Edna last week. They could have decided that they’d had enough of Brandon’s crazy and kept Edna around over him this week. They didn’t. So far, the person at the bottom of the alliance has been utterly unable to move his or her way up the totem pole. That makes for a few dull Tribal Councils, but it tends to also mean good game play.

Now, things have to get interesting. We’re down to the core five: Coach, Brandon, Rick, Albert and Sophie. (My Survivor office pool girl Sophie is the last woman standing! Good for her!) They made an alliance on the beach the first night they were there and stuck together til the end. The only wrench, of course, could be the returning Redemption Island player. What will they do next? Who is truly at the bottom of the alliance of five? I can’t wait to find out. Until then, let’s talk about what went down this week.

We kicked things off with Cochran and Ozzy at Redemption Island, where things were disappointingly pleasant. Perhaps the fact that Cochran regretted his move and admitted to Ozzy that bailing on the alliance was a mistake meant that Ozzy wasn’t willing to kick him when he’s down. I, for one, still don’t think Cochran’s move was that idiotic – had he stuck with Savaii, would he not be in the exact position Edna was in this week? Let’s check in on Edna and see how she’s doing.

Oh, right – she’s in tears. Oh Edna. Did you really not know you were at the bottom of your alliance? I think you knew. I kind of remember Brandon telling you so a while ago. And yet Edna was sure she stood at least one rung above the borderline-psychopathic religious zealot high school dropout. So hearing that she was next to go, that was disheartening and she shed a few tears over it.

Look, I get it – she was feeling betrayed, lied to, deceived and all the other things that Survivor makes people feel. But that’s just it – it’s a GAME. All that second class citizen stuff? Suck it up, princess. No one owes you anything. As Edna ranted to Coach about how a lunatic like Brandon was determining her fate in the game, she was interrupted by the lunatic himself. Speak of the devil! Brandon stormed into camp shouting about product placement and the imminent loved ones’ visits. 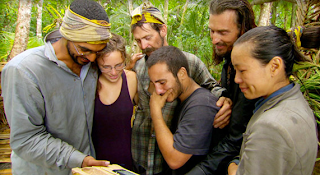 Family visits! First everyone gets to see videos made from their chosen loved ones, right there on the island. My favorite was Sophie’s dad, who said something along the lines of “I didn’t know if you’d make it this far but, you know, I guess you did.” I feel like if Sophie’s dad were my dad, I’d have some emotional issues involving an intense need for approval. Just sayin’.

Then everyone headed to the duel. It was Ozzy vs. Cochran and, man oh man, was I ever rooting for Cochran. Ozzy has just gotten so cocky, and how great would it have been to see him taken down by a pale, skinny sweater-vest wearing nerd? So, so great. The little guy almost did it, too. The first half of the challenge required each player to use grappling hooks to retrieve three bags. Ozzy was fast and efficient, Cochran was humiliatingly terrible. His throws were so bad he almost took out his own eye. So Ozzy got a big lead on the second half of a challenge, directing a ball through a table maze. But with a little advice from Coach and a lot of persistence, Cochran finally gathered all three of his bags and started on the maze – and he was way faster at it than Ozzy. When Ozzy lost his ball near the end of the maze and had to start over, I really thought Cochran had it – but he too lost the ball and had to start over. It went back and forth, back and forth and really came down to the wire…but Ozzy ultimately won. Argh. I was so bummed. And then, of course, I had to listen to Cochran talk about how exciting it was to be on Survivor, and what a dream come true it was to hear Probst say “Come on in, guys” and actually be one of those guys. It was very sweet and probably how I’d feel too, but I’d rather save the sappy crap for the reunion show. I like my Survivor exists to be filled with bitterness and rage.

After the duel and Cochran’s exit, Probst brought out the loved ones – no love for Ozzy though, the true second-class citizen right now. Obviously, the best reunion was that of Rick and his wife, where he did the first interesting thing he’s done all season by grabbing her butt and presumably embarrassing her on national television. I’d be embarrassed, anyway. Also there was Brandon’s dad – Russell Hantz’s brother! Barf, really? We know who Little Hantz is, did we need the extra clarification? I feel like every time someone says “Russell Hantz” the little troll makes a dollar or something. I don’t want to hear him mentioned.

Cut From The Same Cloth

I’m so glad that Ozzy chose Brandon for a family visit because it meant we all got to witness Brandon’s dad micromanaging his son’s game play.

Despite telling Brandon to make decisions based on his heart and not the game in his video message, Papa Hantz was not thrilled to find out that Little Hantz was playing this game for Jesus, not for a million bucks. Not thrilled at all. While Papa Hantz is racking his brain for a bible quote that can somehow be interpreted as “Jesus would bring a million dollars home to feed his family and buy them season tickets for the Houston Astros” Coach is busy telling Ozzy that “as a Christian man” he sees a final three plan that involves him, Ozzy, and…one other person. Glad you’ve thought it through so well, Coach.

Of course, Brandon’s dad knows what third person Coach should be taking to the final three – his son! Yes, the man actually confronted Coach and more or less demanded that Coach take Brandon with him to the final three. It was so weird, y’all. I don’t think I’ve ever seen a loved one get that involved in the game before.

Not How Jesus Would Play

Funnily, after telling his dad that he wanted to play Survivor how Jesus would, Brandon was an absolute jerk at the Immunity challenge.

The challenge was an interesting one, although not one that comes across great on TV. Players had to move from piece to piece on a giant game board, without ever stepping back onto a square that had previously been used. Their moves early on in the challenge had a strong influence on where they ended up – just like the game overall, Probst said! “That’s a great metaphor, Jeff. You took the words right out of my mouth,” Coach responded. What a suck up. I bet I would have hated him in school. When a player was out of moves, they were out of the challenge. And everyone’s job was to make sure Edna wouldn’t win Immunity.

Albert was out first, followed by Brandon – who made a point of explaining that all he’d been trying to do was sabotage Edna. That’s great, Brandon – rub it in a little more! What, are you also going to give her a consoling hug and then sneak a “Kick me” sign onto her back? Brandon’s behavior didn’t sit well with the rest of the tribe, but it was never going to be enough to make them change their votes. If anything, it should make a player want to keep Brandon around because he’s so obviously ruffling feathers. That’s who you want to sit next to at final tribal council.

Rick and Sophie went out next, leaving just Edna and Coach. I would have loved for Edna to win just to mix up the game, but the layout of the board made it obvious that Coach had many more moves left than Edna. She went out, and Coach won Immunity.

Knowing she was next to go, Edna tried everything she could to stay in the game. She argued that Brandon didn’t fit with the tribe’s manta of honor and integrity. Sure, I guess, but that’s all semantics – Edna’s problem, I think, was that she didn’t make a strong enough argument for why she was better to keep around in the game. She mentioned it a little, but she should have focused more on how she wouldn’t win any challenges and no one would vote for her in the end, but Brandon has played so up front and straight-forwardly that bitter jury members might throw him some votes.

Edna also asked Coach for his Immunity Idol and was turned down and, when all else failed, tried to convince Sophie and Albert that Coach had given that A-OK for them to vote out Brandon. “I’ll eat a piece of his bleep, that’s how much 100 percent I am,” she swore. Yikes. Unfortunately, it was never going to work. It doesn’t matter if you vow to consume feces, a big move like that would never come secondhand, so unless Coach told Sophie and Albert himself that they were to vote for Brandon, it wasn’t gonna happen.

Since the writing was already on the wall, there isn’t much to say about Tribal Council. Edna was voted out and sent to Redemption Island to spook a sleeping Ozzy, and the final five (sort of) returned to camp.

Next week will likely be the final Redemption Island duel and, once again, I’m rooting against Ozzy. It’s not that I even dislike him that much, it’s just that I think he’s too overconfident. I also think that if he reenters the game and goes to the finals with Coach, it would be a clear sign that both the Redemption Island twist and the returning players twist have not made Survivor better. What do you guys think?

With the finale on December 18th, we only have two episodes left. Since she’s my pick in the office pool and one of the better players left in the game, I’m totally rooting for Sophie. Who are y’all rooting for?