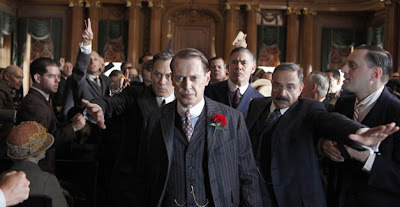 Major spoiler alerts ahead for those of you who didn’t yet see last night’s Boardwalk Empire finale.

You know, I spent almost all of season one of Boardwalk complaining about how bored I was with at least 2/3 of the show, and then when Jimmy betrayed Nucky in the season finale I said “Well that’s exciting, I guess I’ll keep watching.”

And then I spent this season making the same complaints. I fell behind by several episodes and forced myself to catch up, but I was annoyed when storylines I was disinterested in were given screen time and ones that intrigued me weren’t done justice. It wasn’t until last week’s infamous mother-lovin’ episode that I was really excited by the show. I was pretty sure I was done with Boardwalk Empire. I still might be. But holy crap, do they ever know how to suck a viewer in with a final moment. 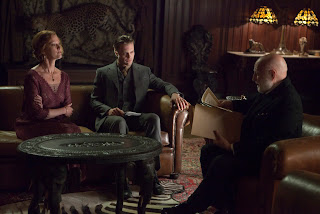 This season, that final moment was Nucky Thompson killing Jimmy, the prodigal son. Jimmy betrayed Nucky, the man who mentored him, his father figure, and everything went to shit. He did it upon the urging of his biological father, a man he’d never loved or trusted, a man he ultimately killed. He lost his wife in the process, he was in over his head. He regretted it all. So Jimmy tried to make things right.

He satisfied Chalky White and the black community by shooting up a Klansmen meeting and hand-delivering the scum who’d shot up his uh, place of business, back in the first episode. I was disappointed that this was all we saw of Chalky. I guess witnessing a slice of his home life was simply background information on the character, but I was really hoping to see more of Chalky this season. One of the many ways the show disappoints me, I suppose.

Jimmy’s main task, though, was to help Nucky out. He and Harrow intimdated witnesses and got Nucky’s trial thrown out. There was a staged suicide, and Eli ended up taking the fall. But it didn’t matter, Nucky doesn’t seek forgiveness and, apparently, he doesn’t grant it either. I thought he was hand-delivering Angela’s murderer to Jimmy, but instead he was using him as bait to put Jimmy in a vulnerable position. Without even a hint of remorse or sadness, Nucky himself shot Jimmy twice and killed him. 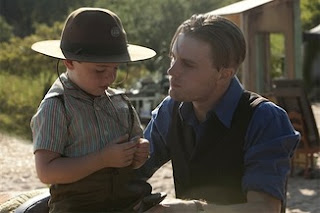 Not only was it a shocking elimination of a main character – arguably the second most important character on the show – but it was an interesting development for Nucky’s character who until them had seemingly kept blood off his own hands. It seemed like Jimmy knew it was coming (he told Harrow not to accompany him to the meeting and he ensured that destroying the Commodore’s will would not only put himself in a position of inheritance, but his son should something happen to him) and in one of my favorite lines from the episode, he told Nucky he’d died long ago, back in the trenches.

For so much of the episode we saw the softer, gentler side of Nucky. He asked Margaret to marry him (mostly to save his own ass, though) and after she saw him coaching little Emily to walk again, Margaret agreed to do it. As we know from Margaret’s conversation with Esther (the lawyer), she doesn’t really love Nucky. But he’s not cruel, like her husband was – not to her or her children, anyway. When Margaret questioned Nucky about his whereabouts the morning after he killed Jimmy though, she saw through his lies. I think she knows they didn’t bury the hatchet before Jimmy re-enlisted. And with that, she signed the land Nucky had given her for safekeeping over to the church.

And this is where we leave season two. Jimmy is dead, but his storyline isn’t. His poor son will now be raised by a sick and twisted woman, and her statement last week to Jimmy that “he won’t be a boy forever” is now even more chilling. And will Richard Harrow now seek revenge on the person who killed his best friend? Both Jimmy and Angela are gone, one again he is alone.

We also saw Van Alden settle down with his nanny and child using a fake name in the idyllic small town of Cicero, Illinois. Will this be the end of his character as well? If I return to the show next season, I’d be happiest if we left things there.

This was by far the best episode of the season, and some of the scenes were so beautifully executed I’d say they were the best of the series so far. I’m not sure if the season held my interest enough to get me back next season, but I can’t deny that it was a damn good episode. What did y’all think? Were you shocked by Jimmy’s murder? Did it renew your interest in the show, or do you think the show will suffer without Michael Pitt’s captivating presence?