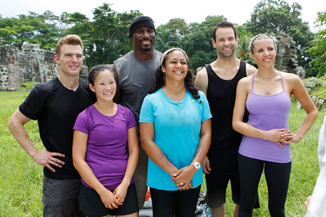 After what most viewers agree was a lackluster season, we have our winners of The Amazing Race season nineteen. They may not have been the team I was rooting for, but they weren’t the team I wasn’t rooting for either. Obvious spoiler alert ahead.

Congratulations to Ernie and Cindy, whose intensive pre-race training and opposites-attract style relationship managed to get them to the finish line before all others. These two were never my favorite team, they weren’t even my favorite team in the finale, but once it was clear that Amani and Marcus were out of the running I threw my meaningless support behind them.

Ready for take off?

We began with all teams traveling on the same flight from Panama to Atlanta, which according to Sandy and Jeremy, TOTALLY SUCKS! SO MUCH! At first I thought they were just being super rude about the South, but then they reminded us that Atlanta is Amani and Marcus’s hometown and thus they’d have home field advantage.

Not that it mattered. Upon arriving in Atlanta, the teams were sent to Flight Safety International for their first challenge: acting as pilot and co-pilot, they’d have to land a simulated airplane. Those things basically pilot themselves now anyway, right? (That’s for anyone who’s seen Friends With Benefits.) Wrong.

Disappointingly, all the women played co-pilot to their male teammates. Really, ladies? Weak sauce. Ernie and Cindy were the first to crash (Cindy let the speed drop too low and they basically fell out of the sky) while Marcus crashed on the landing. Jeremy landed the thing on his first try and just like that, Barbie and Ken were in the lead.

Ernie and Cindy managed to pull it together on their second try and left right on their tails, but Marcus kept messing up. Over and over and over. When they put up the caption “4th attempt”, I knew it was bad news. They usually do that when they’re about to cut to “7th attempt” several minutes later.

I give a damn!

The clues in this final leg were all very cryptic, beginning with this one – teams were instructed to locate the former residence known as “The Dump”, which teams had to figure out was the home of Margaret Mitchell, author of Gone With The Wind. Neither team’s cab driver knew the spot, but while Ernie and Cindy figured it out via smartphone, Sandy and Jeremy were mistakenly directed to a furniture store called “The Dump”. A quick Google search tells me that the two places are only a ten minute drive apart, but it was the time Jeremy and Sandy spent searching the store for a clue box that killed them. It was an understandable mistake, but one that cost them a million bucks.

On their way to the house, Ernie mentioned that he couldn’t imagine losing to any other team than Andy and Tommy. A valid statement, since the dudes had clearly been their stiffest competition. But to secure her role as the less likable half of the team, Cindy added “It’d be like losing to the C students when we’re the A+ students.” Ernie simply replied “Well, you’re the A+ student. I’m more of a B+ student… well… maybe a C+ student.” Oh Ernie. When it comes to your performance on the Race, you’re the B student and Cindy’s the C student. She’s the one who lost train tickets and crashed a plane, remember? Don’t be so hard on yourself!

Ernie and Cindy arrived at the house and immediately regretted their decision to let Ernie do the Roadblock, because it required typing. He’d have to go inside the house and, using an old school typewriter, bang out the next clue. The catch was that it required a number 1, which was missing on the typewriter – each player would have to figure out that they should type an l (lower case L) instead.

Ernie figured things out pretty quickly, and left before Jeremy and Sandy arrived. In fact, teams never saw one another again after they left Flight Safety International. Ernie and Cindy were aware that Jeremy and Sandy had left before them, and never knew if they’d caught up or not. As for poor Marcus, he was still trying to land that damn plane. It took at least 12 attempts, possibly more, before they successfully landed the plane.

The typed out clue was, again, cryptic. Teams simply had a set of numbers to go on: 44 – 715 – 74. It represented baseball player Hank Aaron, player #44 who scored his 715th career home run in 1974, all of which was commemorated at Turner Field in Atlanta. This was something that could have tripped teams up for a while, but Ernie and Cindy quickly figured it out thanks to a gracious hotel concierge who let them use the Internet – only this time! You’re not normally allowed behind the counter! I love how he clarified that to Cindy, as though she might return to Atlanta and hit him up for free Internet use all the time.

The final challenge was undoubtedly cool, but ended up seeming a lot easier than some other final tasks have been in the past. It was a giant, billboard-sized map of the world, with carabiners located in many different spots. One teammate had to climb up there and, attached to a harness, hoist him and herself around while attaching a red cord through all the different locations they’d been to in the correct order. Thus, mapping out their Amazing Race journey on a very large scale. The other teammate could shout directions from the ground but, of course, Cindy basically did the whole thing herself.

In the past, teams have had to identify more difficult details like the flags representing the countries they visited or the people who greeted them at pit stops. Simply identifying a few countries in the order your visited them didn’t seem that hard, and while they still had to choose the correct location on the map there weren’t so many carabiners that it was that daunting or confusing of a task. I was hoping to have my socks knocked off but, much like the season overall, it was underwhelming. 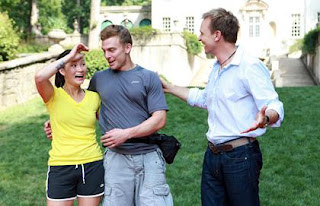 Ernie and Cindy left the challenge before Jeremy and Sandy arrived, so I knew there was almost no way Ernie and Cindy could lose – GPS confusion and all. Ernie and Cindy’s cab driver missing the turnoff for the final pit stop and the GPS saying “recalculating” again and again added some fabricated suspense, but this was by no means a close race. Jeremy and Sandy quickly finished the map challenge with only one brief and easily corrected error, but it was already over. Ernie and Cindy sprinted to the finish line and collected their million dollar prize.

Unsurprisingly, Cindy did most of the talking at the finish line. She and Ernie want to use the money to set up a foundation. (Does everyone who wins a million bucks want to start their own charity? Aren’t there enough deserving charities out there that you can donate to?) Her parents expect her to be perfect and win, and she did so I guess they’re right and she really is perfect. The race was great per-marital counseling. Also unsurprisingly, Jeremy and Sandy had nothing interesting to say when they arrived in second place. And, delightfully, when Marcus and Amani arrived in a distant third (we never saw them complete the other challenges) Amani talked about how they’ve taught their kids that you don’t always win but you should never quit, and that she won’t allow them to lose their tempers the way Marcus did at the fake airplane. Awesome! Marcus said Amani was “smarter than any quarterback I’ve played with and tougher than any linebacker.” Adorable, although it made me wonder why Amani wasn’t pilot to Marcus’s co-pilot if that’s the case. I wish they’d won, but the results could have been worse. What do you guys think?

Thanks for reading and see you in season 20, TAR fans!