Hey look, a Christmas episode that acknowledges one of its characters is Jewish! After watching the Glee Christmas special last night and wondering if the writers had simply forgotten that Rachel Berry is Jewish, it was nice to see New Girl remind everyone that Schmidt is. I really liked “The 23rd”, and I think it was a great example of how New Girl has developed into an ensemble comedy that I really enjoy. 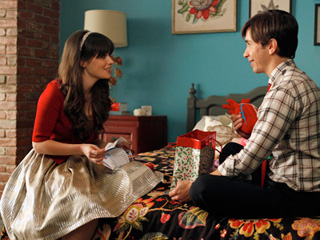 Jess reacts the Christmas in a similar way that I do. Gifts for people she loves, sparkly and festive clothing, driving down a street famous for going overboard on the decorations, called “Candycane Lane”. These are all things I do. Jess is also in a new relationship – she and Paul have been dating for about a month now – and with that comes the difficult question, “What do we get each other?” I feel like everyone has been in this situation, whether you’ve been with someone for one month or eight, it’s hard to navigate that first Christmas together. Jess ended up going for kind of a cute gag gift – a beating heart plush toy. Paul went in another, much more Serious Relationship direction, getting Jess tickets to a music festival…in Vienna. Yikes. Nothing is more awkward than realizing you’ve been totally out-gifted.

Paul convinced Jess that not only did he love her gift, but he loves her. Uh-oh. Jess wasn’t ready for that, and thus began the demise of their lovely, quirky little relationship. We all knew it had to end because Justin Long was only doing three episodes, and I think the writers did a good job crafting a believable end to the story arc. Jess has always been the person who loves more, and suddenly she was the one wanting to slow things down.

The writers have made it clear that there’s a spark between Nick and Jess, that the show will have a will-they-or-won’t-they aspect to it. So it was fitting that he came into play in the breakup, but not in a conventional romantic triangle way. After Jess confided in Nick that she didn’t love Paul back, Nick tried to help out by telling Paul to stick it out because Jess just didn’t love him yet. But Paul hadn’t realized that Jess didn’t love him, and hearing that from Nick – well, that was soul-crushing. The two went outside to talk, hilariously and unfortunately locking Nick outside with them by accident. The poor guy had to witness the whole uncomfortable conversation that led to the breakup. Jess wanted to slow things down, and Paul didn’t think he could do that. 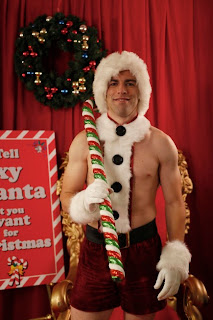 Meanwhile, I also liked what else was going on at the Schmidt’s Christmas party. Winston bonded with the socially awkward son of Schmidt’s boss Gina (just one more reason that he should be hired on at the school where Jess works, though he did get a job offer of sorts from Gina), CeCe realized that she’s dating a total douche, and Schmidt finally stood up to his boss, who’d been making him dress up as Sexy Santa every year. One of my favorite things about the episode was that we finally got a glimpse into the strong friendship Jess and CeCe have. Sure they might be really different, but these girls grew up together and know each other really well. It was nice to see some of that materialize.

Throughout the whole episode, Nick was under pressure to catch a 4am flight home to Chicago for Christmas. He’d missed it four years in a row, and couldn’t let down his mama again. (Loved all the phone calls with Nick’s mom.) But on the way to the airport, desperate to cheer Jess up, he instead drove down “Candycane Lane” and obnoxiously/sweetly shouted loudly, in the middle of the night, for everyone to turn their lights on.

Not only did “The 23rd” do a good job of wrapping up the Jess/Paul romantic storyline, but it offered up some great character development and struck the right chord of sweet, hopeful and melancholy that made holiday episodes great. I really liked it – what did you guys think?

Here are a few other lines and moments that made me laugh: