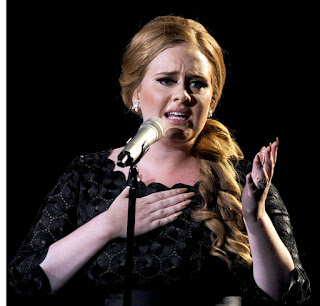 OK, I was going to post a list of my favorite songs of the year. I had it all written up and everything. But when I looked at it just now, it felt arbitrary. “Moves Like Jagger” was on it. Sure, I dug that song this year. I was listening to it much longer than what was considered socially acceptable. But was it a fave of the year?

In truth, when it comes down to it, all five spots on that list belonged to Adele. On my iPod (on most iPods, radio stations and other sources of music, really) it was the Year of Adele.

“Rolling In The Deep”? I still love to play that sound at an obnoxiously loud volume and pretend I’ve been wronged. “Someone Like You”? Heartbreaking. Even my favorite performance this year on Glee was an impeccable mash-up of two Adele songs, “Someone Like You” and “Rumor Has It”.

Adele’s voice is like no other, and she sings with so much emotion that her millions of fans are simultaneously furious at and thankful for the dude who broke her heart and inspired her album, 21. With Adele there’s no autotuned vocal manipulations, no armies of dancers dressed up in futuristic crap, no lyrics that simply spell out fun words. There’s eyeliner, retro hair, and some really damn good singing. And that’s all it takes.