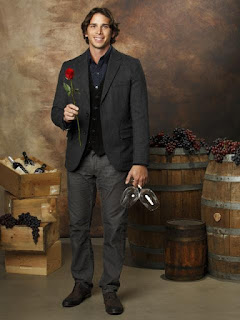 Good news, folks – I made a few New Years resolutions on January 1st, but none of them were to stop watching terrible TV with ironic distance and a strong sense of schadenfreude. So here I am again, reviewing the latest season of The Bachelor, for worse or for even more worse.

The Bachelor‘s latest victim? Last season’s runner-up, Ben Flajnik. What do you need to know about Ben? Well, he’s 28 years old, makes wine for a living, has floppy hair that many women find endearing, and he got down on one knee and proposed to Ashley last season before she cruelly gave him the boot. Oh, and before he went on The Bachelorette his dad died, and so his schtick is all about how before he was “closed off” to love and after going on a reality TV dating show he’s totally open to it. Now you’re all caught up!

The first episode is hard to recap because there are SO MANY women and they all look the same. Long hair. Orange spray tans. Sparkly dresses. Vacant smiles. It’s hard to keep them straight, but let’s at least chat about the ones who made an impression.

At first, the gimmicks were just cheesy greetings – the first girl told Ben that her name was Rachel, and her middle name was Rose. Right, like he doesn’t already have enough names to memorize, you’re adding middle names into the mix? Good luck. The second girl to introduce herself to Ben was a law student who seemed committed to humiliating every law student ever by telling Ben “The verdict is in, and you are guilty… of being sexy!”

Neurotic blogger Jenna mangled her opening line and spent the next hour stressing out about it, but I’ll have so, so much more to say about her later.

Then there was Courtney. Only minutes into the show she was already getting the villain edit. Did you know she’s a model?? She is! You must know, because she only mentioned it 40 times. Sorry, 40 million times. She actually said to Ben “I’m at this point in my life where, I’m a model.” Um, what? Ugh. But she’s pretty, so she stuck around.

Emily, a PhD student in epidemiology who we’ll just call “Contagion” gave Ben some hand sanitizer, breath spray and his first kiss. Er…sexy? Then there was a pageant girl in a sash, a girl from Kentucky in a large hat, and a girl who brought along her grandmother. Yes, Brittney brought along her 72 yera old grandmother, crutches and all. This was kind of hilarious. First of all, yes, it got her past the first round. Ben was totally won over by Sheryl. But he was so busy chatting up Grandma that I’d be surprised if he can even remember her granddaughter’s name. At the very least, all he knows about her is “blond” and “has a grandmother”. That’s the stuff relationships are built on. Second of all, how mean were all the other girls? Oh boy, were they peeved! Nothing is funnier than seeing a girl in a giant hat realize she’s been out-gimmicked. Contagion complained that that the only reason Brittney brought Grandma was so she’d look good next to someone old and wrinkly. Ouch. I thought Sheryl looked rather nice!

Jennifer the accountant gave Ben a list of numbers (I wouldn’t have revealed that the dress I was wearing was the 55th one I tried on), British gal Lyndsie recited a poem mocking her own chin (she seemed a bit manic, but funny) and Anna pulled a bold move and didn’t even stop to introduce herself to Ben – just delivered a coy “Hi” and walked right on by. I would have ignored her all evening and sent her home, but I’m a girl. I’m sure Ben fell head over heels for it.

And then Lindzi put everyone to shame by arriving on a horse, who she’d named “First Impression Rose”. Um, at least she’s honest? Man, I thought the girls were collectively hating on Grandma Girl, but they REALLY hated Pony Girl.

Cocktails and Claws Come Out

Party time! Things got weird real quick. With a First Impression Rose on the line, women went to all kinds of crazy lengths to stand out, from asking Ben to do push-ups to blindfolding him and feeding him Sour Patch Kids. Contagion performed a really awkward rap, which Ben somehow found endearing and full of attitude rather than reeking of Caucasian cliches.

Meanwhile, Monica was too busy wooing another woman to bother conversing with Ben. Yes, the blond (who looked like an older Jennifer Lawrence, yes?) quickly had her sights set on VIP Cocktail Waitress (there’s one every season) Blakeley. She was curled up on the sofa with her, murmuring “You’ll be in my life forever” and “You’re beautiful. You’re amazing,” to her. Naturally, both women made it to the next round because if Bachelor producers know anything, it’s that the show can only benefit from a woman who hints at wanting a lesbian experience.

Even weirder than Monica’s blossoming friendship (or “experience”) with Blakeley though, was her out-of-nowhere feud with blogger Jenna.

Jenna’s blog is called The Over Analyst, which I won’t link to because a) the site wasn’t even working last night thanks to a huge influx of traffic and b) I’m pretty sure her whole appearance on the show is just to promote her blog. And good on her. I wish I’d thought of it.

Jenna thinks she’s Carrie Bradshaw. Her opening package showed her typing away on her laptop, writing pithy sentences like “What is LOVE?” and “How can I find it?” She has crafted an identity for herself as someone who is neurotic. She probably thinks that identity is endearing, but it only endears her to people like me, who are also neurotic. (OK, not me, but people similar to me.) In real life, she comes across as a hot mess. On this show, she is a hot mess.

For some reason, Jenna got the vibe that Monica didn’t like her and instead of just letting it go (after all, there was a good chance one of them might be going home post rose ceremony) she decided to announce it, over and over again, to anyone who would listen. There were tears, and then for some unknown reason one girl decided to set up a meeting between Jenna and Monica to try and arrange a truce. It went something like this:

Then Jenna said “Maybe we can share a tampon sometime” (OK there was a little more to the conversation than that, but barely) and Monica yelled “Eeeewwww” and ran away.

Jenna sat with another girl and cried, and hadn’t yet dried her tears when Ben came over to see if she was OK. Do you think she still thought she had a chance at getting that First Impression Rose? After blabbering about feeling nervous with a trembling lower lip, Jenna went into the bathroom to sob and talk to herself. At first I thought she was in there with someone, but no, just her. She was probably rehearsing the opening paragraph of her book deal, because I’m pretty sure that’s why she’s there. Either that, or her “blog” is actually a journal from her court-mandated therapy sessions, because if this girl is for real than she totally seems like the kind of chick who’d set her boyfriend’s condo on fire because she saw him at Starbucks with his hot cousin. 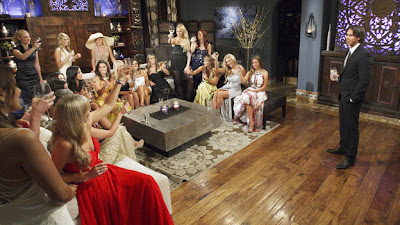 Rose Ceremony time! After filling the bathtub with tears, Jenna managed to drag herself out of the bathroom in time for the rose ceremony. Good thing too, because she was definitely sticking around – if not because Ben felt bad for her, then because the producer’s made him. How many “Producers’ Choice” contestants do you think there are? Three? Five? I don’t think it’s a coincidence that the neurotic blogger,  her blonde nemesis, and the nemesis’s female crush all stuck around.

A lot of girls stayed. Seven went home – Lyndsie the Brit, who I think could have been kind of fun to watch. Amber Bacon, the Canadian – has anyone else noticed that the Canucks they cast on these shows tend to have mean streak? Stop trying to break our stereotype! Anna with the bold move was sent home, so I have a smidge of respect for Ben. Dianna left, paper bag of Sour Patch Kids in hand. Shira was sent packing, probably because she was standing sideways and Ben couldn’t see her. Holly with the large hat, and some girl named Amber T. who cried a lot.

Then of course, we were treated to a giant preview of the season to come. Did you guys know there will be crying? There will be so much crying! Also, it seems like there will be more nudity than usual. So there’s that. What did you guys think of the show? Was it loony tunes enough for you?