Although I haven’t been reviewing Grey’s consistently this season, I did love the last episode in November and loved this one even more.

When Grey’s wrapped up for 2011, Meredith was pretty sure she wasn’t getting Zola and she didn’t want to try for another baby. She and Alex had been in a major vehicle accident with a sick premature baby and emerged from an ambulance to discover that an even more major accident had happened outside. Cristina had operated on Teddy’s husband Henry and he died, but no one could tell Teddy because she was operating on a patient of Callie’s who had severe injuries thanks to a major screw-up in surgery. Things were intense, and they only got more intense with “Suddenly”.

I thought the Teddy storyline would be the most compelling part of the episode, but the story of the family involved in the car accident was incredibly heartbreaking. A grandmother, father, mother and three children were scattered across the road. The eldest daughter, Lily, only had minor injuries and was charged with holding the baby while Alex and Meredith tried to do what they could. First the grandmother died, and then help arrived and everyone was brought back to the hospital. Alex and Arizona saved the baby – once again, Alex made me love him by going to extraordinary measures. 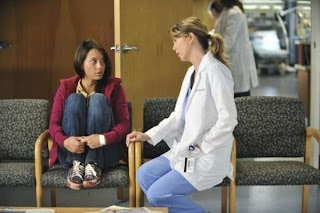 The injuries to the family were extensive. First, Lily watched her mother die – the second family member death she’d witnessed that day. Her siblings were taken into surgery – her brother had been trapped under a vehicle and had internal bleeding and complications in surgery, and her sister had a shard of glass in her eye. Her father’s injuries were so severe that he kept coding, and eventually Lily made the adult decision to take him off life support and let him die in peace. She’d only turned 18 a few hours earlier. Major props to the actress who played Lily – I thought she really did an amazing job, and I was surprised how much I cared about this character when we’d only just met her. 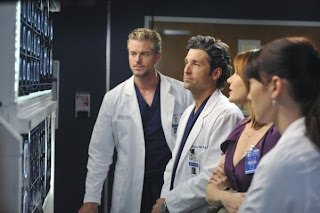 There were also some great moments with the doctors involved in the cases. Meredith comforted Lily. Mark called in his new, hot girlfriend to help Derek with the eye surgery on the young daughter, which led to some great moments of jealousy with Lexie. New Hot Doctor Girlfriend seemed like a totally confident, savvy surgeon who was easy to hate on, until she revealed to Lexie after the surgery that she’d been scared to death of screwing up the whole time. “Damn it,” Lexie said to herself. “Now I like her.” Meanwhile, Bailey bonded again with Ben when he helped save the boy’s life by recognizing that he was suffering from malignant hyperthermia quickly enough to react and fix the situation. 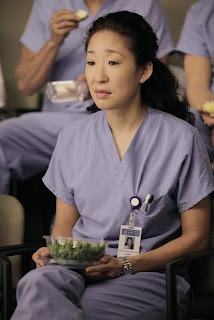 The Teddy storyline was just as heartbreaking. Poor Cristina was sent into the OR with her when Teddy insisted that ONLY Cristina would be able to help her save the patient. Cristina had to joke around  during surgery and act like everything was fine when she’d just discovered that Henry was the patient who’d died. It was even more painful to watch that unfold than it was to actually see Teddy find out the truth. As soon as the surgery was over, Cristina broke the news to Teddy. She was as professional as possible, but you could tell it killed her to have to do it.

Cristina hit the nail on the head when she told Owen that she didn’t want to hear about how there’d been no other choice, and Teddy wouldn’t care about that explanation either. It doesn’t matter that it was an impossible situation, that there was no choice. It was still awful. How can Teddy possibly recover from that and continue working at Seattle Grace?

For all the heartache, there was a happy ending. Things between Meredith and Derek, which had been more than strained in the early part of this season, finally seemed OK again. He said they’d be fine, just the two of them. And then the social worker showed up with Zola in her arms – they won, they get their baby back. Yay! As weird as I thought it was for the social worker to just show up like that, I was thrilled. I wanted Meredith and Derek to get the baby, to move on to this new phase in their lives, and now we get to see that happen.

All in all, I thought this was an absolutely stellar episode. While Grey’s has certainly been inconsistent over the past few years, they always know how to really deliver a gut-wrenching, heartbreaking episode. This was definitely one. What did you guys think? Did you like “Suddenly”?