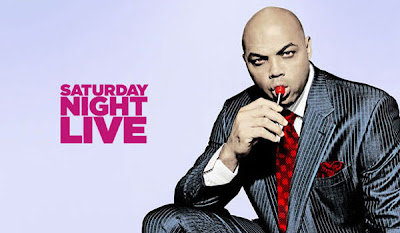 Hello Couchtime readers! Since this is the first episode of 2012, it reminds me of resolutions. I am going to be more vigorous with writing these reviews. That’s my resolution. I have missed a lot since the season started and I would like to apologise. How Jill writes so much everyday still boggles my mind. For the episodes that I have missed here’s a quick review.
Ben Stiller: He’s funny. Bad writing
Emma Stone: Every skit was a repeat but Chris Martin showed up to sing with Kath and Garth.
Katy Perry: Awful! Just awful! But now I feel bad since she is getting a divorce.
Jimmy Fallon: This was amazing. I should have reviewed it. But Christmas is such a busy time. No Allison! No excuses.
Anyway, tonight’s guest host is Charles Barkley and surprisingly this is his third time hosting. Why do they keep booking him? Maybe it’s because he is little unpredictable. I have a friend who loves Charles Barkley. She has read his book a couple of times and from what she wrote on Facebook will be watching the show in her Charles Barkley jersey.
Ok, there is this crazy time delay for the show. What is going on? I don’t care about this silly republican election. Show me the parodies of the election. No! I don’t need to know the weather in Boston.
Count the time people, it’s almost 1am (Atlantic time) and the show finally starts.
Opening Skit
Samberg is playing Rick Santorum who is addressing the nation about his election plans. Boring! But kudos to the sweater vest. And is this the first time Andy has ever done the opening? If so…I am proud of you man.
Monolouge
As I thought, Charles is not the best reading off cue cards and his pacing is just awful. But wait, I forgot…. he’s an athlete. What am I expecting? Charles mentions that he is now a spokesperson for Weight Watchers, which is weird. And he admits that. And that’s pretty much the monologue. Oh man, this is not a good sign.
Chantix
Ever watch those drug commercials that have a million side effects? Well Chantix, a drug to help you quit smoking, has got plenty of them. The most disturbing: homicidal thoughts towards your loved ones. And Robert DeNiro face. Even though the side effects were over-the-top there is some truth to this parody. One time I saw an ad that listed “increased need to gamble.” That’s actually a good excuse for a guy who lost a lot of money. “It wasn’t me! It was the drugs, I say! The drugs!” I like how the resolution of the commercial was, “Just keep smoking.” 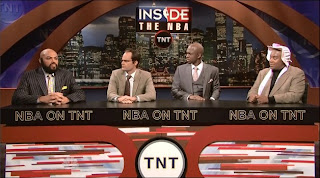 TNT Basketball Commentary
While Kenan Thompson does his Charles Barkley impression, Charles Barkley does his Shaquille O’Neal. Now this really wasn’t much of an impression now was it? (Again, he’s not an actor.) Shaq is portrayed as a very boring person who is unable to add any depth to commentary. (“I eat ribs!”) And all Charles and Shaq do is just rip on each other. Are Charles and Shaq friends in real life? I can’t tell. I usually I get the cultural references in most SNL sketches but when it comes to sports I draw a total blank. Maybe I should have watched this episode with someone who is a basketball fan.  BUT there was a pretty good reference to Kazaam and all its awfulness.
White People Problems *Must See*
The phrase “White People Problems” has become fairly popular as of late. Not sure where it came from but after some quick Googling, I think Louis CK has something to do with it. I recently had that phrase thrown at me and it really helps you put things in perspective. Charles Barkley hosts a show that illustrates the ugly problems that white people face, like not knowing if chicken is free-range or politely asking your friends (who you used to do the holidays with) not to stay in your summer home. So funny and so true. I thought it was clever the way the show resembled Unsolved Mysteries and Rescue 911.  And saying how white people use the word “awkward” for every situation is SO true. My favourite line, “Man, that problem was so white it should go snowboarding.”
Joanne’s Announcement
Charles Barkley plays Joanne, a sexy large woman who has something important to tell her friends and boyfriend, the tiny Paul Brittan. It was weird. There is someone at SNL who is just writing odd skits and I want to know who it is. I think this is the same writer of the “Dolphin Movie” skit with Charlie Day and “Retirement Party” with Jason Segel. These skits are funny, then not, then funny, then not. I need to have a real serious conversation with someone about this.
Post Game Interviews
Here is another sports related skit I just don’t get. I need a sports friend. You know one that could be a good addition for trivia. But fellas if you hate the nonsensical words coaches use after any professional sporting event, this is the skit for you.
Weekend Update
Seth’s first guest is Michelle Bachman (Wiig) who has stepped out of the Republican race and finally gets a chance to blink. Funny! “Mama like.” There are many who do an impression of this crazy-eyed lady but Kristen’s is one of the best. I also enjoyed how she said her message from God to run for election was most likely a mass text he sent to others.
Next guest is Fred Armisen’s Nicolas Fehn. This character is officially old. I will admit I am still impressed how this character can talk without ever really saying anything. Kind of like me during job interviews.
Finally Seth welcomes Bobby Moynihan’s Drunk Uncle. Today Drunk Uncle starts the New Year by reminiscing how much five dollars could get you. He also demands to know why girls want to “kindle their boyfriend?”  Watching this I feel proud to say I don’t have to deal with a drunken uncle over the holiday season. But for those of you who have. My thoughts are with you.
Stepping away from Seth’s guests, there were some pretty funny jokes this episode. Here were two of my favourite:
On a woman in Canada who was shot in the face but finished her beer before going to the hospital: “Known in Canada as a keeper.” (But seriously, did this happen?)
On a new reality show called, Pregnant Daughters, Pregnant Moms: “Or it’s original title, Florida.”
Wyndmere
I was wondering when they would bring this character back. The fanciful Lord Wyndmere returns to watch some football but can’t sit still until he gets his sweets. I was glad that Paul got a second chance with this character but he didn’t elevate it enough for me. If he does it for a third time there should be something more. The skit was saved though when you saw how uncomfortable Charles Barkley was holding the tiny Paul like a baby. Oh and hearing Jason (the dad) yell as Andy (the son) “Stephen! Get off your dumb butt and get the Lord a snack!”
Digital Short: Convoluted Jerry
These Digital Shorts don’t have the spark that they used to. The songs were funny, “Quit Not Being My Lover” but what happened to these things? Sad face. PS: I had to ask my roommate what convoluted meant. Opps!
In Memory
Every award ceremony takes a sad look at those who have passed away. So why shouldn’t the Adult Film Awards be any different? They are a community who care deeply for each other. (Is care the right word?) Hilarious! Everyone from the cast must have had a great time putting this together. I wonder how much “research” the writers conducted if you know what I’m saying? I had to explain to one of my roommates the “set designer” jokes. Did you get it?
The show was pretty weak but as stated before the host was not an actor so what more could I ask.
Next week! Daniel Radcliffe! I have some pretty high hopes for this. We will see next week.