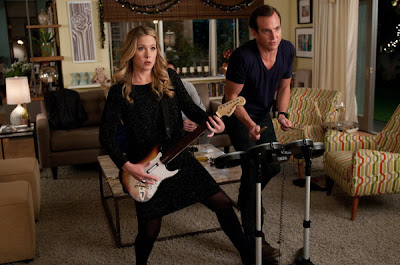 Does anyone like New Year’s Eve? At this point, surely it’s widely acknowledged to be an overrated night of unfulfilled expectations, crowds of partying amateurs, ridiculously overpriced cover charges and DJs who won’t take requests – and now, it’s a crappy celeb-packed romantic comedy, too!

But it’s also a time that people reassess their lives, make resolutions and, in the case of Reagan and Chris, tackle what they hate about other people. Up All Night has been moved into the Thursday night lineup on NBC, a choice that I think is great – it’s a warmer comedy than say, Community (yes, I miss it too, but I can’t keep whining about it) and more traditional than 30 Rock but it makes a lot more sense next to these shows than (*shudder*) Whitney. As Reagan and Chris made resolutions to change each other, I felt like the show was making a few as well.

I liked what “New Year’s Eve” did for the characters and their relationships, as Reagan and Chris spent their first New Year’s Eve at home rather than at some velvet-roped club. For Reagan, this meant a chance to plan a good ol’ fashioned game night. For Chris, it meant going through hell.

As someone who’s incredibly competitive and occasionally obnoxious, I thought I’d relate to Reagan. But man, she turns into a crazy bitch within minutes of playing Trivial Pursuit. I did like the overriding message here, though – that all couples have little things about each other than drive them nuts, and sometimes in the middle of an argument those things become a lot more annoying than they actually are.

Meanwhile, Kevin and Ava’s problems came from Kevin’s insecurities that he’s not good enough or not fancy enough for a woman like Ava. It was an issue that was bound to come up eventually, but I thought the writers did a good job of keeping Ava grounded. She was mostly just embarrassed of her train wreck romantic history, and wanted to protect her new man from all of that.

My biggest problem with the episode was with Missy and her too good to be true boyfriend, Kevin. It could have been funny, but it just felt too over-the-top. Would anyone be THAT rude to her own boyfriend? One that she only just started dating? The joke was a little one-note, but I think it would have played a lot better had it been toned down.

Reagan and Chris’s problems with each other piled up as they started to include things like Reagan’s too-French pronunciation of the word “croissant”, her use of the word “totes” instead of “totally” or “yes” and Chris’s fake golf swings and need to fill every silence. As midnight approached they realized how crazy they were being and started erasing grievances off the board until they were left with only the originals – Reagan’s over-competitiveness and Chris’s Borat impression.

Overall I thought it was a decent episode, though not the best. I’d encourage new viewers to stick with the show though – of all the new comedies from the fall, Up All Night is my favorite. Here are a few other quotes and moments from “New Year’s Eve” that made me laugh: